One Bump and Bang Too Many 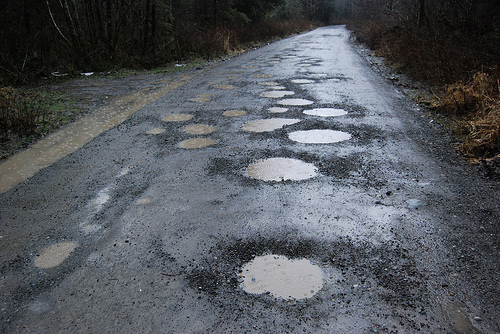 A week and a half ago, Polly and I took a road trip south, ending up in Delphos, Ohio. In a post titled Luck, Fate, or Providence, I mentioned an event that took place while I was taking some photographs of an old canal:

…Polly and I took a road trip to Ottoville, Fort Jennings, and Delphos. Like most of our trips, I took my camera equipment with me. As we were wandering around Delphos, we stumbled upon a lock from the era of the Miami and Erie canal. Getting down to the lock was a bit treacherous for me. I wanted to get as close as possible, so I gingerly walked down the concrete abutment to the lock. I didn’t fall, slip, or trip. Lucky me, I thought.

After ten minutes or so, I was ready to return to the car. I had two paths I could take. I could retrace my steps or make a big step and little jump to ground level, Polly said she would give me a hand, so I chose the latter. Polly reached down, took my hand, and began to help me up. And then, our world went crazy. Polly couldn’t pull me up completely and I violently fell forward, knocking both of us to the ground. If my weight had been balanced slightly the other way, I would have no doubt went careening down the concrete abutment into the canal. The fall would have likely killed me.

The good news? My cameras escaped damage, though one of them does have a slight scrape. The hood on the lens kept it from being smashed. Polly ended up with bruised knees and I ended up with a twisted ankle and hip and a nasty, bloody contusion on my left leg. It is still oozing slightly today.

I know I was lucky. I should have retraced my steps. This was the safe and prudent choice. However, Polly was standing right there and she said she would help. Why not, right? She helps me out of the recliner and car all the time. What neither of us counted on was how difficult it is to pull up a 350# man. When Polly pulls me out of the car or the recliner I help her. This time? I was dead weight and I almost literally became so…

Yesterday, I had Polly take me to Urgent Care in Bryan. My left leg is swollen, an inch bigger circumference wise than my right leg. The contusion is weeping fluid and has become infected. I am white, the wound is red and yellow, and I am trying to keep it from turning black. (shout out to the Evangelical song, Jesus loves the Little Children, red and yellow, black and white, they are precious in his sight) I am taking an antibiotic. The doctor swabbed the wound and sent it to the lab. The lab will do a culture to determine what is causing the infection. If warranted, the doctor said he will change the antibiotic, but he thinks the one he prescribed should do the trick. This is the same leg, BTW,  that I had a foot problem with last fall.

Last Sunday, Polly drove us to Cincinnati, Ohio to attend the Cincinnati Reds-St. Louis Cardinals baseball game. We had a great time. There’s nothing like experiencing a live baseball game. When the stands are full, as they were on Sunday, the stadium comes to life. The cheers and the groans ripple loudly through the crowd, as Reds fans live and die with their team. In many ways, I find the live baseball experience to be a lot like a revival service. There’s that “feeling” in the air that resonates deeply with me.

That said, we have come to the conclusion that I can no longer take trips hours away from home. Driving to Cincinnati and back meant we were on the road for almost 8 hours. Whether we took the interstate or a state highway, the roads, thanks to a hard cold winter and a lack of infrastructure upkeep, pummeled my body. Mile after mile the roads bumped and banged my body, so much so that even double doses of pain medication couldn’t stop the pain.

As much as I want to cheer the Reds on in person, I know I can no longer do so. My body has issued its decree, cross this line and I will make you pay. As I have said many times before, a time would come that I was no longer willing to pay the price of admission, no longer willing to suffer the brutality of long trips. That time is now.  I hate that it has come to this, but it is what it is.

Now this doesn’t mean that I can take shorter trips to places like Toledo, Fort Wayne, Magee Marsh, or Marblehead. An hour or two from home, along back roads at a slow speed, I can still do. There’s a minor league baseball team in Fort Wayne and Toledo, so I can still enjoy the live game experience. There’s plenty for us to see and do within a few hours of our home. There’s plenty of sites and out-of-the-way places to photograph. Instead of lamenting what I can’t do, I choose to focus on what I can do. This is me adapting to my environment. Shout out, Charles Darwin.

We recently bought a new car, a 2015 Ford Escape. We made this purchase because I was having difficulty getting in and out of our 2013 Ford Fusion. The Escape sits up higher and has greater head and leg room, allowing me to sit comfortably, even when I have to twist my body to lessen the pain. We are quite pleased with the car. Actually it is an SUV, but we call it car.  Health problems have robbed me of my ability to drive any distance but a short one. This is another thing I’ve had to adapt to. For decades, I did most of the driving and now I must rely on Polly to chauffeur me wherever I want to do. Again, it is what it is.

The nasty injury detailed at the start of this post has proved to be a wake up call for Polly and I. I no longer can afford to push the envelope, risking injury. Since I am diabetic, any type of wound is a concern. I pastored several people who lost their legs due to a cut or wound that morphed into an abscess drugs and doctors could not cure. Despite all our miracle-working drugs, there are viruses and bacteria that can and do kill us. I must take better care of myself, not putting myself in circumstances that could cause physical injury. When I walk with a cane, I tend to ignore my limitations. When using a wheelchair, it is obvious that I can no longer pretend to be Superman. While I refuse to give up, I must face reality and adjust my life accordingly.

The good news is that Polly will still be by my side. We’re in this together until death do us part. Her love and care make the pain and suffering bearable.