Bruce, What Do You Think of Russell Earl Kelly and His Position on Tithing? 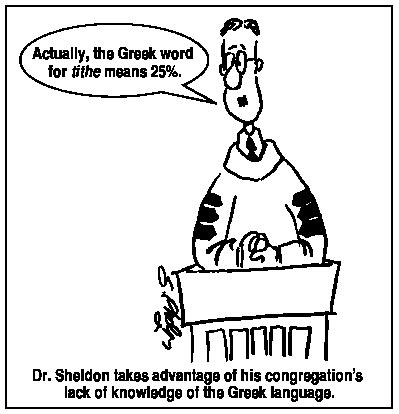 Several weeks back, I asked readers to submit questions they would like me to answer. If you would like to ask a question, please leave your question here.

Bruce, have you ever heard of Russell Earl Kelly and his book, “Should the Church teach tithing?”. And if so, do you plan to blog about it? I promoted it as much as I could, and got ZERO attention for it, probably because I was not important enough to be noticed or because wherever I go I seem to become the proverbial black sheep. Considering that I have lost every single popularity contest I have ever been in, both inside and outside the church, I suppose this is not surprising. Anyways, even as a freethinker now, I still agree with the majority of what this guy teaches about tithing, to the best of my memory.

For readers who are unfamiliar with Russell Earl Kelly:

Russell Earl Kelly is an American Christian theologian, apologist, author, speaker and blogger. He writes nonfictional theological books. Russell is best known for evangelizing and debating why tithing 10% to one’s church is not a Christian obligation…

Although legally blind since 1989, Russell subsequently completed a Th. M.. and a Ph. D. at independent Baptist-oriented Covington Theological Seminary in Ft. Oglethorpe, Georgia in August 2000. His dissertation was on the subject of tithing. From that dissertation came his first book, Should the Church Teach Tithing? A Theologian’s Conclusions about a Taboo Doctrine. His second book is Exposing Seventh-day Adventism, published in 2005. His third book, From Gethsemane to Ascension, An Ultimate Harmony of the Gospel, Easter and Resurrection Plays, February 2008, is in conversational style…

You can check out Kelly’s horrible looking Front Page/Windows 95 era looking website here. According to Sitemeter, the site averages about 500 page views a day. You can read his blog here.

Kelly is a 70-year-old New Covenant Independent Baptist who loves to put PhD after his name and talk about tithing. One would think that Kelly has a degree from a respected university, but he doesn’t. He earned his PhD at Covington Theological Seminary, an unaccredited Independent Baptist institution in Ft Oglethorpe, Georgia. Want a doctorate? It will cost you $2,395. Work required? 40 credit hours and a 25,000 to 50,000 word thesis. You can check out Covington’s catalog here.

New Covenant giving is: freewill, sacrificial, generous, joyful, regular and motivated by love for God, fellow Christians and lost souls. Do not burden or curse God’s poor who struggle to feed and shelter their family. Although there is no set percentage for Christians to give, all should give sacrificially or lower your standards of living in order to further the reach of the Gospel.

Kelly, like many Independent Baptists, is a dispensationalist. There is no possible way for one to be a dispensationalist and still believe tithing is for today. There’s nothing in the New Testament that remotely teaches that Christians should give 10% of their gross income to the church (the storehouse). Preachers who believe in tithing must use Old Testament proof texts to prop up their beliefs. IFB preachers pretty much ignore the commands of the Old Testament except for the verses on tithing, women wearing men’s clothing, and sodomy. Many preachers added to the tithe requirement demands for special offerings and Faith Promise missionary offerings. It is not uncommon to see poor IFB church members giving 10-20% of their income to the church, believing that if they did so God would open the windows of heaven and pour them out a blessing. Like their faith healing counterparts, IFB preachers promise wonderful blessings from God if people will just open their wallet and give an above 10% offering to God.

While I think that Earl Kelly, based on what I have read on his blog and website, is full of himself, I do think he is essentially correct when it comes to tithing and what the New Testament teaches about giving. His teachings haven’t caught on because, for many churches, abandoning the tithe would bankrupt them and force their preacher to get a real job. Preachers have a vested interest in maintaining good cash flow and the tithe is the best way to do so.

When Polly and I were first married, we were tithers. We also gave a lot of money to missions and every time the church took a special offering we gave liberally. I would preach sermons on tithing, rebuking those who were stealing from God. I would preach from Malachi 3:8-10 sermons about those who robbed God:

Will a man rob God? Yet ye have robbed me. But ye say, Wherein have we robbed thee? In tithes and offerings.Ye are cursed with a curse: for ye have robbed me, even this whole nation. Bring ye all the tithes into the storehouse, that there may be meat in mine house, and prove me now herewith, saith the Lord of hosts, if I will not open you the windows of heaven, and pour you out a blessing, that there shall not be room enough to receive it.

As my theology began to evolve and I was influenced by New Covenant theology and Calvinism, I came to see that tithing was an Old Testament command no longer in force. This change in belief was helpful because it allowed me to put an end to me receiving a pittance of a salary and then making it even more of a pittance by giving a tithe and offering. It made no sense for me to tithe when the church was not even paying me a living wage. Now, in the end, we often gave more than 10% of our income to the church or to parachurch ministries. Instead of seeing the church as the bank through which all funds must go, we gave some money to the church and then helped ministries and individuals as God led us to do so. Buying a homeless man a meal was just as important as giving the church $20.

Generally, I think most churches have way too much money and are poor stewards of what they do have. I had a banker in Somerset, Ohio tell me one time that I would be shocked if he told me how much money many of the local churches had on deposit. He told me this because he thought the church I pastored was different, knowing that we rarely had a $100 checking account balance.

I was of the opinion that money was meant to be spent. Yes, take care of the church building, fund ministries, and pay the preacher. Anything above that should be spent on ministering to others. The last church I pastored was sitting on a pile of money and the first thing I did was help them spend it. They had so much money in the bank that they hadn’t balanced the checkbook in years. I balanced the account for them and found that they had $5,000 more than they thought they did. In the seven months I was there, I had the church spend money on remodeling the building. Quite frankly, it was a dump. Of course, the church was fine with spending the money. Doing the actual construction work? A handful of men did all the work. Most of the members were quite happy to let others do the work. They were too busy bitching about the remodel to help, complaining about everything from wall and carpet colors to lighting. I lasted seven months and was so glad “God” led me elsewhere.