Bruce, the Pornographer: Why I Really Left the Christian Faith 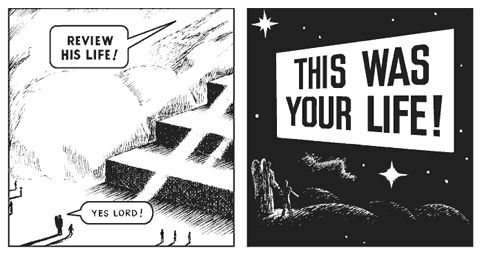 …..Be on guard for Satan’s deceptions. Never lose sight of the fact that you are involved in a spiritual warfare and that there is an enemy of your soul who hates you intensely, whose goal is your destruction, and who will stop at nothing to destroy you. Which leads me to ask: why are you reading those infidel websites anyway, when you know how destructive they are to your faith? These sites are literally pornographic (evil writing) and so ought in general to be shunned. Sure, somebody has to read them and refute them; but why does it have to be you? Let somebody else, who can handle it, do it. Remember: Doubt is not just a matter of academic debate or disinterested intellectual discussion; it involves a battle for your very soul, and if Satan can use doubt to immobilize you or destroy you, then he will.

I firmly believe, and I think the Bizarro-testimonies of those who have lost their faith and apostatized bears out, that moral and spiritual lapses are the principal cause for failure to persevere rather than intellectual doubts. But intellectual doubts become a convenient and self-flattering excuse for spiritual failure because we thereby portray ourselves as such intelligent persons rather than as moral and spiritual failures. I think that the key to victorious Christian living is not to have all your questions answered — which is probably impossible in a finite lifetime — but to learn to live successfully with unanswered questions. The key is to prevent unanswered questions from becoming destructive doubts. I believe that can be done by keeping in mind the proper ground of our knowledge of Christianity’s truth and by cultivating the ministry of the Holy Spirit in our lives….

Craig readily admits that websites like mine can cause a Christian to doubt their faith. While I have no interest in converting any Christian to atheism, I do think the tenets of Christianity and the teachings of the Bible should be carefully investigated. If my writing causes a Christian to question and have doubts…good!

Second, Craig attempts to dismiss people like me by calling our testimony of loss of faith a Bizarro-testimony. (not to be believed) Craig contends we lost our faith, not for intellectual reasons, but because of spiritual or moral failure.  Craig believes former Christians use intellectual doubts as a cover for moral or spiritual failure. In doing this, Craig moves the focus from Christianity and the Bible to the individual. According to Craig, I am no longer a Christian because of some moral lapse or spiritual deficiency in my life.

I didn’t have a moral or spiritual collapse that led to me leaving the Christianity. Instead, I decided to investigate again the claims of Christianity and its divine Holy Book. Conclusion? I weighed Christianity and the Bible in the balances and found it wanting. (Daniel 5:27)

At the end of the day, it really is all about the Bible.