How Do Christians Explain My Life? 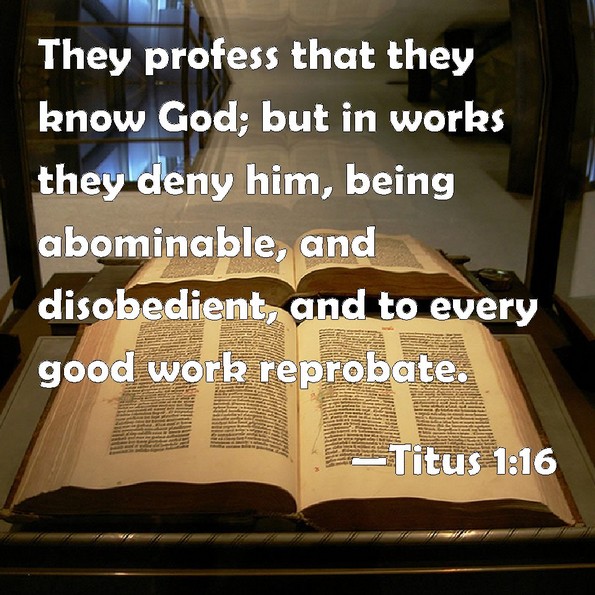 Rather than asking each Evangelical to “explain” my life, I thought I’d let the inspired, infallible, inerrant Word of God answer for them:

Little children, it is the last time: and as ye have heard that antichrist shall come, even now are there many antichrists; whereby we know that it is the last time. They went out from us, but they were not of us; for if they had been of us, they would no doubt have continued with us: but they went out, that they might be made manifest that they were not all of us. But ye have an unction from the Holy One, and ye know all things. I John 2:18-20

For I am not ashamed of the gospel of Christ: for it is the power of God unto salvation to every one that believeth; to the Jew first, and also to the Greek. For therein is the righteousness of God revealed from faith to faith: as it is written, The just shall live by faith. For the wrath of God is revealed from heaven against all ungodliness and unrighteousness of men, who hold the truth in unrighteousness; Because that which may be known of God is manifest in them; for God hath shewed it unto them. For the invisible things of him from the creation of the world are clearly seen, being understood by the things that are made, even his eternal power and Godhead; so that they are without excuse: Because that, when they knew God, they glorified him not as God, neither were thankful; but became vain in their imaginations, and their foolish heart was darkened. Professing themselves to be wise, they became fools …For this cause God gave them up unto vile affections:… And even as they did not like to retain God in their knowledge, God gave them over to a reprobate mind…. Who knowing the judgment of God, that they which commit such things are worthy of death, not only do the same, but have pleasure in them that do them. Romans 1:16 –32

My defection from Christianity is proof I never “really” was a Christian. Real Christians persevere to the end. Real Christians keep going to church, reading the Bible, praying, tithing, and living according to the Christian social code until the end. A real Christian believes, walks, acts, talks, and lives like a Christian. And the standard for this believing, walking, acting, talking, and living? Each Christian’s interpretation of the Bible, thus reminding all who are paying attention that there is no such thing as Christianity; just Christianities, with each believer having their own form of the faith once delivered to the saints.

According to Romans 1, I have the clear marks of a reprobate. A reprobate is one whom God has condemned to hell while still in this life, unless you are a Calvinist, then God condemns some people to hell before they are even born.  To the reprobate, God says “ I am done with you, do what you will.”

Supposedly, since I am now a reprobate, this is how I live my life:

For this cause God gave them up unto vile affections: for even their women did change the natural use into that which is against nature: And likewise also the men, leaving the natural use of the woman, burned in their lust one toward another; men with men working that which is unseemly, and receiving in themselves that recompence of their error which was meet. And even as they did not like to retain God in their knowledge, God gave them over to a reprobate mind, to do those things which are not convenient; Being filled with all unrighteousness, fornication, wickedness, covetousness, maliciousness; full of envy, murder, debate, deceit, malignity; whisperers, Backbiters, haters of God, despiteful, proud, boasters, inventors of evil things, disobedient to parents, Without understanding, covenant breakers, without natural affection, implacable, unmerciful: Who knowing the judgment of God, that they which commit such things are worthy of death, not only do the same, but have pleasure in them that do them. Romans 1:26-32

In other words, I am now supposed to a homosexual, a murdering, evil, hater of God, among other things.

Here’s how I see it: this is one of those did he resign or was he fired moments.

Did I leave God or did God leave me?

The divorce is final.

The relationship is over.

All that is left is the scars and memories.

And therein lies the problem. Most Christians are incapable of seeing what is right in front of them. The Bible has become blinders that keep them from seeing and understanding anything that does not fit their narrow, fundamentalist worldview.