The Homophobia of Focus on the Family, Samaritan’s Purse, and Franklin Graham 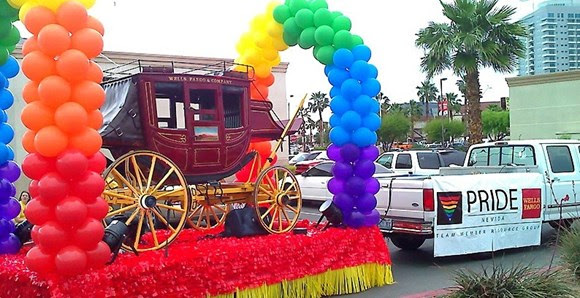 …settled a suit with 24,000 Florida homeowners alongside insurer QBE, in which they were accused of inflating premiums on forced-place insurance. In May 2013, Wells Fargo paid $203 million to settle class-action litigation accusing the bank of imposing excessive overdraft fees on checking-account customers. Also in May, the New York attorney-general, Eric Scheidermann, announced a lawsuit against Wells Fargo over alleged violations of the national mortgage settlement, a $25 billion deal struck between 49 state attorneys and the five-largest mortgage servicers in the US. Schneidermann claimed Wells Fargo had violated rules over giving fair and timely serving…

Focus on the Family, Samaritan’s Purse, and Franklin Graham said nothing.

Outside of the fact that the couple is two women, is there anything in this video that is remotely offensive?

Here’s what is offensive; the homophobia and bigotry of Focus on the Family, James Dobson, Samaritan’s Purse, Franklin Graham, Tim Wildmon, and the American Family Association.

According to Buddy Smith, vice president of the American Family Association:

Wells Fargo’s history follows a pattern from which it has not wavered. Over the past few years, Wells Fargo has marched in scores of “Gay Pride Parades,” advertised monthly in gay magazines and websites, and has endorsed “Gay Pride Month.”

Again, where’s the offense? All I see is a major banking concern treating their employees fairly and providing for them necessary medical care. As far as Wells Fargo courting gay money, last I knew gay money spends and earns interest just like heterosexual and fundamentalist Christian money.

Who would you want to do business with?

“This is one way we as Christians can speak out – we have the power of choice. Let’s just stop doing business with those who promote sin and stand against Almighty God’s laws and His standards. Maybe if enough of us do this, it will get their attention.”

…“that use shareholders’ advertising dollars to promote homosexuality. … It’s promoting a godless lifestyle. … A bank should be promoting the best interest rates they’re going to give me and what they can do for me as a business. But they should not be trying to get into a moral debate and take sides.”…

“At Wells Fargo, serving every customer is core to our vision and values. Diversity and inclusion are foundational to who we are as a company. Our advertising content reflects our company’s values and represents the diversity of the communities we serve.”

Graham, knowing that his actions make him look like a homophobic bigot, let it be known that he was not targeting companies that hire or serve gay and lesbian customers. Sure, Franklin, sure. This is exactly what you are doing.

I expect more Evangelical temper tantrums once the U.S. Supreme Court legalizes same-sex marriage. On the day this is announced, if you listen closely you will hear the air being sucked out of Focus on the Family, James Dobson, Samaritan’s Purse, Franklin Graham, Tim Wildmon, the American Family Association, and other extremist fundamentalist Christian groups. WE can only hope so much air is sucked out that these groups die, never to be heard from again.

Here’s what I think of Franklin Graham. He is an educated Fred Phelps and Steven Anderson. He represents everything that is reprehensible and wrong with Evangelical Christianity. Here’s the good news and the bad news: 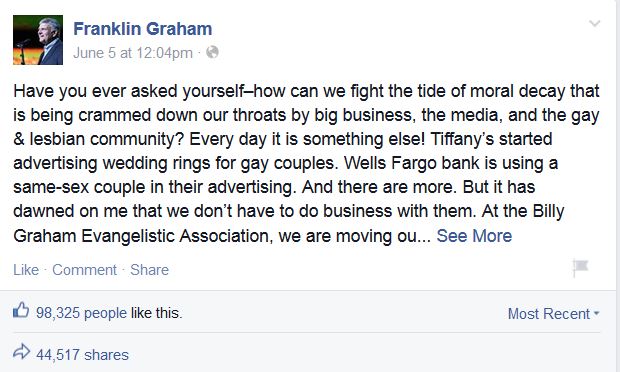 On Monday June 5th Graham took to Facebook to express his outrage over Wells Fargo’s offense against almighty God. Since then, his screed has attracted 98,235 likes and 44,517 shares. Bad news? There are 98,325 people who think like Franklin Graham. Good news? There are ONLY 98,325 who clicked LIKE on his childish tantrum.  Graham is getting a lot of press now, but remember that his media presence is much larger than his actual influence. He is just another Evangelical hack demanding everyone live by his interpretations of an ancient, outdated, contradictory, and, at times offensive, religious text. Justice and fairness continue to march forward, trampling over the dead corpses of people like James Dobson, Tim Wildmon, and Franklin Graham. Perhaps, one day, justice will prevail.

I am starting to wonder if Franklin Graham is a closeted gay. He sure spends a lot of time talking about things being rammed/crammed down his throat.