Dear Evangelical: Tell Me the Truth, Am I Headed for Hell? 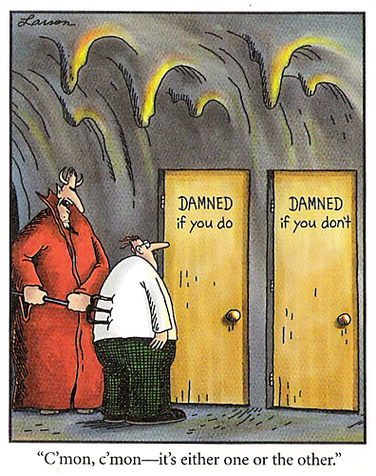 Bruce: Five years ago, 152 Pakistanis were killed in a plane crash.

Evangelical: I hope they all knew the Lord.

Bruce: Why does that matter?

Evangelical: Well, if they didn’t know the Lord they probably went to hell.

Evangelical: Well…some of them might have trusted Jesus just before they died. I don’t know their hearts. God is the judge.

Bruce: It is likely the plane passengers were Muslim. Most likely the last word on their lips was ALLAH. Do Muslims go to heaven when they die?

Evangelical: Only if they believe in Jesus.

Bruce: Muslims do not believe Jesus is the way, truth and life.They do not believe salvation is found in Jesus Christ. So, did the Muslim plane passengers go to hell when they died?

Evangelical: I am not their judge. It’s between them and God.

A lot of Evangelicals are increasingly uncomfortable with what the Bible says about hell. According to inspired, inerrant Word of God,  all non-Christians go to hell when they die. They will be tormented day and night for eternity. All Muslims, Buddhists, agnostics, and atheists will burn forever because of their rejection of Jesus Christ. Many Evangelicals even add Catholics, liberal Protestants, and universalists to the thou shalt burn list.

Let me remind readers what the Bible says about hell (collated from several Christian websites):

The Bible, as interpreted through the lens of Evangelicalism, is very clear on the matter of hell and why people end up there after they die. Even those who have never heard about Jesus Christ will burn in hell forever. It’s their fault for not knowing, even though no one ever told them about Jesus.  According to the Calvinist, before God created the first human he decided where each of us would bunk when we die. The elect go to heaven, the non-elect go to hell.

According to the Evangelical score card, the overwhelming majority of people, past, present, and future, end up in hell when they die. This is God’s righteous judgment of those who did not repent of their sins and believe on the Lord Jesus Christ. Wait a minute, what about the people who lived before the birth of Christ?  Where did they go when they died? Let the explaining and theological gymnastics begin.

Yet, when it comes right down to it, when confronted face to face with someone such as I — a person who once professed Christ, who once preached the gospel of Christ — many Evangelicals have a hard time telling me I’m headed for hell. They convince themselves that I am just confused or backslidden. They are certain the Holy Spirit will straighten me out and in no time I will be back preaching at First Baptist Church of Somewhere.

For some people, particularly those who are Christian friends or former parishioners, the notion of Bruce Gerencser going to hell is quite preposterous. A few of my friends have told me they find my defection from Christianity quite unsettling. If I can fall away then anyone can fall away. If I am headed for hell, will they be next?

I’ve attended many funerals over the years. I have only been to one funeral where the preacher had guts enough to say that the deceased went to hell. In every other instance some anecdotal story was told to give the living the impression that the deceased was now in heaven with all his dead loved ones (please read Dear Pastor, Do You Believe in Hell?). No matter how vile or evil the person was, he went to heaven when he died. People can live most of their lives as  atheists, but because they asked Jesus into their heart as a child, they go to heaven when they die. What a sweet deal, right?

If what the Bible says about salvation, heaven, and hell is true, then these claims are also true:

If you are not willing to consign to hell most of the billions of people who have lived on this earth, then it is time for you to stop saying you believe the Bible is truth; that you believe that Jesus is the only way of salvation. Just remember, once you admit that you only really believe certain parts of the Bible, you have started down a slippery slope that could lead you to where I am today. Then you too will be headed for hell, just like me.

I write this post as a challenge to my Christian readers, friends, and former parishioners. What do you really believe? Do you really think I’m headed for hell? Do you really believe God will fit me with a special fireproof body so he can torture me for eternity? Don’t try to evade the question by saying things like, I don’t know your heart or only God knows for sure. If one can know from the Bible what salvation is, then certainly it seems people should be able to know if they don’t have it. And if they don’t have salvation, they are certainly going to hell.