Why Do Fundamentalist Men and Women Dress Differently? 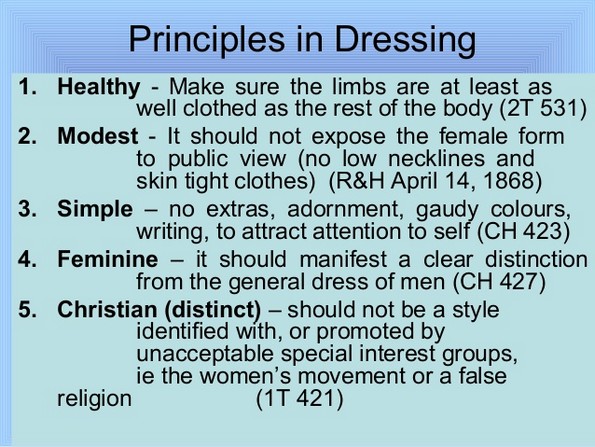 Within Evangelicalism, especially on the far right of the Evangelical spectrum, women are considered subservient, second class, whoring Jezebels out to rob men and teenage boys of their virtue. Listen to enough sermons at the local Independent Fundamentalist Baptist church and you will likely conclude that seductive women are lurking in the shadows ready to expose a bit of leg and cleavage, bringing weak, helpless men to their knees and hopefully to her bed. After all, the Bible does have a story that warns of this very behavior:

…For at the window of my house I looked through my casement, And beheld among the simple ones, I discerned among the youths, a young man void of understanding, Passing through the street near her corner; and he went the way to her house, In the twilight, in the evening, in the black and dark night: And, behold, there met him a woman with the attire of an harlot, and subtil of heart.(She is loud and stubborn; her feet abide not in her house: Now is she without, now in the streets, and lieth in wait at every corner.) So she caught him, and kissed him, and with an impudent face said unto him,I have peace offerings with me; this day have I payed my vows. Therefore came I forth to meet thee, diligently to seek thy face, and I have found thee. I have decked my bed with coverings of tapestry, with carved works, with fine linen of Egypt. I have perfumed my bed with myrrh, aloes, and cinnamon. Come, let us take our fill of love until the morning: let us solace ourselves with loves. For the goodman is not at home, he is gone a long journey: He hath taken a bag of money with him, and will come home at the day appointed. With her much fair speech she caused him to yield, with the flattering of her lips she forced him. He goeth after her straightway, as an ox goeth to the slaughter, or as a fool to the correction of the stocks; Till a dart strike through his liver; as a bird hasteth to the snare, and knoweth not that it is for his life. Hearken unto me now therefore, O ye children, and attend to the words of my mouth. Let not thine heart decline to her ways, go not astray in her paths. For she hath cast down many wounded: yea, many strong men have been slain by her. Her house is the way to hell, going down to the chambers of death. (Proverbs 7)

Evangelicals have concluded that the only way to save teenage boys and men from whoring Christian women is to demand that women cover up their flesh and wear clothing that mutes their feminine shape. They are implored to dress in a way that will not draw any attention from the male species. Often, women are told not to wear excessive make up or jewelry. Again, it’s harlots that paint themselves up and wear bawdy gaudy jewelry, so Christian women should avoid wearing anything that gives the appearance of being an easy sexual mark. Again, justification for this demand can be found in the Bible:

In like manner also, that women adorn themselves in modest apparel, with shamefacedness and sobriety; not with broided hair, or gold, or pearls, or costly array; But (which becometh women professing godliness) with good works. Let the woman learn in silence with all subjection. But I suffer not a woman to teach, nor to usurp authority over the man, but to be in silence. For Adam was first formed, then Eve. And Adam was not deceived, but the woman being deceived was in the transgression. Notwithstanding she shall be saved in childbearing, if they continue in faith and charity and holiness with sobriety. (1 Timothy 2)

While most Evangelical churches no longer make an issue of how women wear their hair, some on the far right of the Evangelical spectrum do, requiring women to wear their hair long and/or put it up in a beehive or bun. As always, the BIBLE says:

Some Evangelical sects believe, based on the above text, that a woman wearing her hair long shows that she is in submission to her father if she is unmarried and to her husband if she is married.  Some sects even go so far as to require women to wear a head covering, a doily-like piece of fabric which says to all who dare gaze on her that she is in submission to God, the church, her father, and her husband.

All of these things are used to keep women in their place. What is that place, you ask? Married, submissive, keeper of the home, bearer of children, and on-demand sex machine. Post high school education is often discouraged, and if a woman is determined to get a college education she is often shipped off to an Evangelical Christian college to train for her MRS degree. The end game is always marriage and bearing children.

On any given day I can go to Meijer or Walmart and I will see Evangelical families shopping. How do I know they are Evangelical Christians? One look at the mothers or the daughters is all I need. Their head-to-toe Evangelical burka or Little-House-on-the-Prairie garb make them stand out from the unwashed Philistines around them. I can even determine of which particular sect they are a part based on the way the women wear certain items of clothing or how they wear their hair. Apostolic or holiness women, forbidden to cut their hair, often put their hair up in a bun or bee hive.

But, here’s the thing, if the unmarried boys or the fathers are in the store without the fairer sex by their side, they blend in quite well. Some Mennonite sects wear a certain style of pants, belts, or suspenders, but outside of the that the men look like any other man in the store. Why is it that the men are free to dress as men typically do, but women are forced to dress in a manner that says to the world that they are part of a religion that treats them like seductresses and appendages, the man’s  servant?

I’m sure pious Evangelicals will suggest that women dress and behave this way because they choose to do so. Anyone who thinks like this is ignorant of the conditioning and mind control that goes on in many Evangelical sects. From the cradle to the grave, women are told what their place is in God’s divine order. They are constantly reminded of the importance of covering up their body so they don’t cause men to lust. Many of the people who read this blog were raised in this kind of religious environment, and they will tell you that the puritanical moralizing becomes very much a part of a woman’s life. It’s all they’ve ever known, so how can it ever be said that they freely choose to live this way?

Here’s all the proof you need. Look at women who leave/flee Evangelical sects such as those mentioned above. What are some of the first things they do after they leave? get a new hairstyle, paint their nails, stop wearing dresses/culottes, start wearing makeup and jewelry, start wearing shoes with heels, show a little leg or cleavage. Perhaps in the quiet confines of the bathroom or the bedroom they look at themselves in the mirror wearing their new style of clothes and they smile and say “nice!” And once the proverbial horse is out of the barn, there’s no hope of corralling it. I know of no woman who ever returned to these type of restrictions once they were free of them.

Were you once part of an Evangelical church/sect that restricted how a women dressed, wore her hair, etc? How did things change for you after you left? Please share your story in the comment section.