Abraham and Isaac: God Has a Right to Command You to Kill Your Child 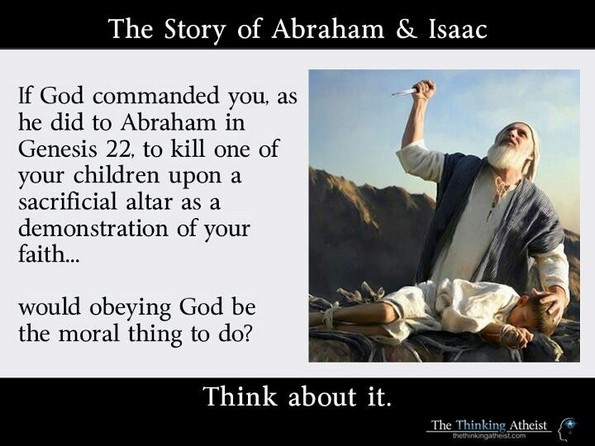 Recently, Petrus Klopper, a writer for the Isaiah 53:5 Project and Solid Rock Apologetics, attempted to answer the question, How Could God Command Abraham to Kill His Son? I say “attempted,” because Klopper miserably failed at his task, just as every other Christian apologist has failed when attempting to do the same. According to Klopper, God had every right to ask Abraham to sacrifice his son Isaac. Notice that I used the word “sacrifice,” not “kill,” as Klopper did in his title. God, in no uncertain terms, asked Abraham to put his only son Isaac on an altar and sacrifice him. Someone is sure to ask, “don’t the words sacrifice and kill mean the same thing?” Yes and no, and I will demonstrate in a moment Klopper’s sleight of hand by using the word sacrifice.

For those not schooled in the mystical stories of the Christian Bible, here’s the text, Genesis 22:1-13, that tells the story of God commanding Abraham to sacrifice his son Isaac:

And it came to pass after these things, that God did tempt Abraham, and said unto him, Abraham: and he said, Behold, here I am. And he said, Take now thy son, thine only son Isaac, whom thou lovest, and get thee into the land of Moriah; and offer him there for a burnt offering upon one of the mountains which I will tell thee of. And Abraham rose up early in the morning, and saddled his ass, and took two of his young men with him, and Isaac his son, and clave the wood for the burnt offering, and rose up, and went unto the place of which God had told him. Then on the third day Abraham lifted up his eyes, and saw the place afar off. And Abraham said unto his young men, Abide ye here with the ass; and I and the lad will go yonder and worship, and come again to you. And Abraham took the wood of the burnt offering, and laid it upon Isaac his son; and he took the fire in his hand, and a knife; and they went both of them together. And Isaac spake unto Abraham his father, and said, My father: and he said, Here am I, my son. And he said, Behold the fire and the wood: but where is the lamb for a burnt offering? And Abraham said, My son, God will provide himself a lamb for a burnt offering: so they went both of them together. And they came to the place which God had told him of; and Abraham built an altar there, and laid the wood in order, and bound Isaac his son, and laid him on the altar upon the wood. And Abraham stretched forth his hand, and took the knife to slay his son. And the angel of the Lord called unto him out of heaven, and said, Abraham, Abraham: and he said, Here am I. And he said, Lay not thine hand upon the lad, neither do thou any thing unto him: for now I know that thou fearest God, seeing thou hast not withheld thy son, thine only son from me. And Abraham lifted up his eyes, and looked, and behold behind him a ram caught in a thicket by his horns: and Abraham went and took the ram, and offered him up for a burnt offering in the stead of his son.

… offer him (Isaac)  there for a burnt offering; this was dreadful work he was called to, and must be exceeding trying to him as a man, and much more as a parent, and a professor of the true religion, to commit such an action; for by this order he was to cut the throat of his son, then to rip him up, and cut up his quarters, and then to lay every piece in order upon the wood, and then burn all to ashes; and this he was to do as a religious action, with deliberation, seriousness, and devotion… (John Gill Commentary, E-Sword)

According to eighteenth century Anglican John Wesley, God wanted Abraham to not only kill his son, but also offer him as a burnt sacrifice. Wesley wrote:

…offer him (Isaac) for a burnt offering – He must not only kill his son, but kill him as a sacrifice, with all that sedateness and composedness of mind, with which he used to offer his burnt – offering. (John Wesley Commentary, E-Sword)

The only solution of this, is what the ease itself actually presents; namely, the divine command. It is evident that the absolute Creator has by right entire control over his creatures. He is no doubt bound by his eternal rectitude to do no wrong to his moral creatures. But the creature in the present case has forfeited the life that was given, by sin. And, moreover, we cannot deny that the Almighty may, for a fit moral purpose, direct the sacrifice of a holy being, who should eventually receive a due recompense for such a degree of voluntary obedience. (Albert Barnes Commentary, E-Sword)

Based on the aforementioned references, we can conclude that God, as a test, commanded Abraham to take his only son Isaac to Mount Moriah, and kill him so he could be offered as a human burnt sacrifice to God.

Klopper makes clear in his post that there are three things God is NOT doing in this story:

Is Isaac human? Yes. Does Abraham build an altar to be used for sacrifices? Yes? Did Abraham place Isaac on the altar, preparing to offering him as a human sacrifice to God? Yes. Does Abraham implicitly obey God’s command to sacrifice his son? Yes. Then, pray tell, how is what God commands Abraham to do NOT child sacrifice? Any fair and honest reading of the text shows that God clearly intended for Abraham to kill (murder) his son as a flesh and blood sacrifice.

Similar stories can be found in other tribal cultures, and Evangelicals are quick to label these stories as murderous and barbaric. Evidently, according to Evangelicals, there is some sort of difference between stories of human/child sacrifices to false Gods, and the God/Abraham/Isaac story. Try as I might, I can’t find the difference.

Klopper, perhaps realizing that his, this is not child sacrifice argument is intellectually vacuous and lame, goes on to say that God is not commanding Abraham to do wrong. Really? In what universe is child/human sacrifice not wrong? Every civilized society in the world condemns child/human sacrifice. Even atheists consider such murderous actions wrong. Yet, somehow, according to Klopper, God asking Abraham to slice, dice, and sauté his son is not, in any way, wrong.

Klopper makes one final argument which, according to his Fundamentalist-infused mind, should silence every critic. It is the one argument, next to faith, that Christians will turn to when no other argument will work: God is God and he has a right to do/command whatever he wants to. Klopper states his argument this way:

God has the right to take human life and could therefore authorize Abraham to do so in a particular case. Note that had Abraham decided of his own accord to sacrifice Isaac, he would have been wrong and his act would have been condemned by God (as were other human-initiated sacrifices).

According to Exodus 20, murder is a sin. Thou shalt not kill, right? But, according to Klopper, if God authorizes (commands) someone to commit a murder (human sacrifice) then it is okay. Hmm, so then, Christians who have, in the past, said that God commanded them to kill their children or spouse, these murderous behaviors are okay, right? I’m sure that Klopper will object to my line of inquiry, but is this not exactly what he is saying? Or is he making a distinction between murderous stories in the Bible and those found on page one of the newspaper? Evidently, if a God-sanctioned murder is recorded by an unknown author in a so-called divine religious text, that makes the slaying moral. However, if a devout twenty-first century Christian — a person we can see and talk to — says and does the same, it is not a God-approved murder. This makes “perfect” sense to me.

Surely we can all agree that a God, ANY God, commanding someone to commit murder is wrong. It matters not whether it is Abraham or Victoria Soliz, a woman who tried to drown her 3-year-old son in a puddle because Jesus told her to do so.  While Evangelicals will attempt to make a distinction between God speaking to Abraham and God speaking to someone like Soliz, there is no difference between the two. Both are hearing voices in their heads that are telling them to murder their children. And hearing voices in one’s head commanding immoral, unethical, or dangerous acts is always a sure sign of mental distress or illness. Despite knowing this, Klopper is determined to present Abraham as a great man of faith who was willing to do whatever God commanded him to do.

It is too bad that Klopper is boxed in by his belief that the Bible is an inspired, inerrant text. Such a belief requires Klopper to accept the Abraham/Isaac/human-sacrifice story as factual history. While Klopper does make numerous spiritual applications from the Genesis 22 text in his post, he is hamstrung by the requirement to accept the text as history. Jews, on the other hand, treat this text as an allegory or a metaphor. They understand, along with everyone else except Evangelicals, that no one in his or her right mind should accept Abraham sacrificing Isaac as literal truth.

And here’s the thing, IF Abraham had actually murdered Isaac, twenty-first century Evangelical preachers would be preaching sermons about Abraham’s great faith and his willingness to explicitly obey God, even if it meant murdering his own son. Praise Jesus!! (And how is this any different from the Muslim who believes God is commanding him to kill in Allah’s name?)

Any God who demands his followers to murder as a test of obedience is not a deity worthy of our worship.