Evangelical Preachers and the Elijah Syndrome 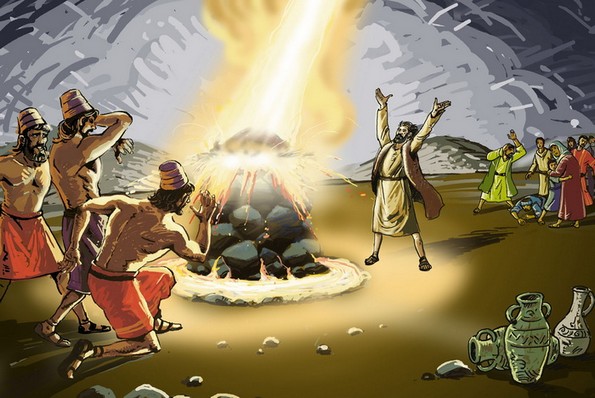 Many evangelical preachers have what I call the Elijah syndrome. In First Kings chapter 18, we find the story of the prophet Elijah doing battle with the 450 false prophets of Baal. According to the Bible, Elijah decided to prove to Israel that Jehovah was the true and living God. Elijah did this by building an altar, placing a slaughtered bullock on the stone edifice, and calling fire down from heaven to consume the bullock. This all-consuming fire was so hot that it melted the altar’s rocks. According to modern science, melting rock into molten lava requires a heat of 1,000 to 2,400 degrees Fahrenheit. Certainly, if Elijah did nothing else, he put on a good show.

After God demonstrated his power, Elijah told the people of Israel to gather up the false prophets and slaughter them. Nothing says I’m a loving God like some old-fashioned bloodshed and slaughter. When Queen Jezebel heard that Elijah and the Israelites had slaughtered Baal’s prophets, she sent a message to Elijah that said, So let the gods do to me, and more also, if I make not thy life as the life of one of them by to morrow about this time. Elijah, fearing for his life, ran away into the wilderness.

In First Kings chapter 19 we find Elijah camped out underneath a juniper tree. An angel appeared to Elijah and told him that he needed to eat because God had a long journey ahead for him. After eating, Elijah journeyed 40 days to Mount Horeb, the very place God gave Moses the Ten Commandments. The Lord came to Elijah and asked him what he was doing at Mount Horeb (which is strange, because an angel, one of God’s celestial beings, told him to go to there). Here is what Elijah had to say:

I have been very jealous for the Lord God of hosts: for the children of Israel have forsaken thy covenant, thrown down thine altars, and slain thy prophets with the sword; and I, even I only, am left; and they seek my life, to take it away.

Elijah saw himself as the one remaining true prophet in the land. God reminded him in First Kings 19:18 that there were actually 7,000 prophets who had not yet bowed a knee to Baal.

Every time I think of this story I am reminded of the fact that a lot of Evangelical preachers see themselves as some sort of modern-day Elijah. And like Elijah, each thinks he is the one remaining prophet in the community standing up for God, the Bible, and Evangelical morality. Such preachers delude themselves into thinking that they alone are standing true, that they alone are preaching the right message. Some of these preachers, men such as Robert Lyte and AW Pink, think that the Christian church is so morally compromised that they can no longer in good conscience be a part of it (Susan-Anne White would another example of this, even though she doesn’t claim to be a preacher).

As readers of this blog know, the longer people steep their mind in waters of Fundamentalist belief, the more extreme they become. Over time, sin lists grow, beliefs harden, and certainty and arrogance convinces preachers that they alone are standing for God. While every community has numerous Christian churches, there are always a handful of churches that think they are above the murky waters of generic Evangelicalism. Like Elijah, they believe that they have been chosen by God to speak on his behalf to the world.

I remember thinking this of myself back when I pastored Somerset Baptist Church in Mount Perry, Ohio. Everywhere I looked I saw churches and pastors who were not winning souls and waging war against Satan, sin, and godlessness. As the church began to grow, I convinced myself that people were attending the church because they wanted to hear a true man of God. What I understood later is that these people found me likable and enjoyed my sermons. So much for being a rugged, stand-alone prophet of God.

The next time you see a street preacher just remember he likely thinks that he is like Elijah, the lone prophet of God. After all, he is the only one standing on the street corner, right? If all the other neighboring churches and pastors really cared about America they too would be on nearby street corners preaching against sin, gun control, abortion, secularism, atheism, Barack Obama, evolution, liberalism, and any other issue deemed a moral affront to the thrice-holy God of Evangelical Christianity.

This I alone remain true to God way of thinking is what turns preachers into insufferable, arrogant, hypocritical pricks. Thinking that they have some sort of inside knowledge about God and the Bible, they are determined to share what they think they know with everyone, even if people don’t want to hear it.

Preachers like Jack Hyles and Fred Phelps did not start out as pontificating bloviators. Over time, they convinced themselves that they had been chosen uniquely by God to speak on his behalf. Once convinced of this, their pronouncements became more severe. These Elijah-like prophets of God, thinking that most churches and pastors are Biblically and morally compromised, withdrew from the larger Christian body.

Inherent to the nature of Fundamentalism is the need to separate and divide. The Independent Fundamentalist Baptist (IFB) church movement is a good example of this. The IFB church movement was born out of rebellion against perceived liberalism in the American, Northern, and Southern Baptist conventions. Originally this separation was due to German rationalism and higher textual criticism. These days, IFB churches and pastors separate due to silly things like music, Bible translations, long hair on men, and whether women should wear pants. Recently, Bob Gray, Sr., the retired pontiff of the Longview Baptist Temple in Longview, Texas wrote a blog post about the importance of being a prophet like Elijah. Here is some of the issues Gray thinks are important:(link no longer active)

In our fundamental churches, schools, and colleges we have some rules, regulations, and standards. We have rules about dating, dress, haircuts on the males, makeup on the females, hairstyles, clothing, smoking, dancing, bad music, Hollywood movies, speech, respect for authority, proper conduct, etc.

The truth of the matter is, when you associate legalism with rules, regulations and standards, people with neo-evangelical hearts who masquerade make such statements in fundamental Baptist clothing. Sometimes they are made by people who were real fundamental Baptist at one time, and yet have become weary of the battle and long to return to the onions, watermelons, leaks, cucumbers, and garlic of acceptance. Also, this cry of legalism often comes from the desks of colleges and seminaries built on fundamental foundations with walls of compromise and a leaking roof of pseudo liberty.

We have grown to desire that our truth be accredited by worldly educated error. We want a license from wrong to do right! My (sic) I remind all of us of that fundamental world we believed in and practiced before we had teenagers, home-schoolers, liberal fundamental colleges, Bill Gothard, Oral Roberts University, Benny Hinn, his girlfriend Evangelist Paula White, amusement parks, and before Jerry Falwell slid down a charismatic water slide!

….
This generation must not listen to the prophets of compromise who are silently bridging fundamentalism to a liberal Southern Baptist Convention in order to garner the crowds. No one is legalistic who insists on standards. When someone adds anything to salvation, other than the shed and applied blood of Jesus Christ, is by definition a legalist.

When you conveniently compromise you are not only betraying Billy Sunday, Sam Jones, Bob Jones Sr., Mordecai Ham, John Wesley, John R. Rice, Curtis Hutson, Lester Roloff, Lee Roberson, Tom Malone, and Jack Hyles, but you are betraying your own standards of just a few years back.

If we cannot have our padded pews with hell-fire and brimstone preaching, then let us go back to the sawdust trail and the store front buildings while sitting on wooden benches.

If we cannot have organs with trained choirs without the seven-fold Amens and the crusty anthems, then let us go back to the “pie-anar” and tuning fork.

If we cannot have a marriage of proper grammar and the mourner’s bench with preaching on Hell, Heaven, the rapture, the second coming, and separation, then let us go back to split infinitives, dangling participles, and hung gerunds.

If tiled restrooms and chandeliers are not conducive to the old-time religion, then let us mark off a path and build an outhouse. Let us screw a 60-watt light bulb in it and order a Sears & Roebuck catalogue for the outhouse and get right with God.

….
Legalism is not a godly mother who insists that her daughter dress modestly. Legalism is not parents enrolling their children in a Christian school that believes as they do about separation from the world. Legalism is not a dedicated aged godly dad who takes his son to the barbershop instead of a beauty shop every two weeks.

….
Most of the Scriptures are about rules on how Christians ought to live! I challenge you to take Genesis and try to show unsaved people how to be saved or redeemed from going to Hell. Now you will find types of salvation, but you will have a tough time finding the plan of salvation in Genesis.

Gray states in no uncertain terms that most of the Christian Bible is about “rules on how Christians ought to live!”  Gray, Sr. has finally reached IFB Nirvana, a place where love, compassion, kindness, and caring for others are replaced by rules, standards, and regulations. When I first started preaching 40 years ago, any preacher making a statement like this would have been roundly condemned. While certainly the Bible has many laws, precepts, and teachings, it is far more than God’s Revised Code of Conduct-2016 Gray Edition©.

The good news is this: the IFB church movement is dying on the vine. Their churches and institutions are but a shell of what they once were. Instead of taking a hard look at why IFB churches are dying and young adults are fleeing to the friendlier confines of “worldly” Evangelical churches, preachers like Gray, Sr. double down on legalistic standards and rules. Instead of considering whether their controlling, abusive behavior is to blame, these Elijah-like preachers blame those who rejected their moralizing and checklist Christianity. Gray, Sr. will go to the grave believing that if people would just follow the rules about “dating, dress, haircuts on the males, makeup on the females, hairstyles, clothing, smoking, dancing, bad music, Hollywood movies, speech, respect for authority, and proper conduct,” the shekinah glory (glory of God) would fall from heaven and all would be well.

Do you have an Elijah-like preacher where you live? Is there a preacher in your town who thinks he uniquely speaks for God? Perhaps you once attended a church that was pastored by a man who thought he was special or unique. If so, please share your observations in the comment section.