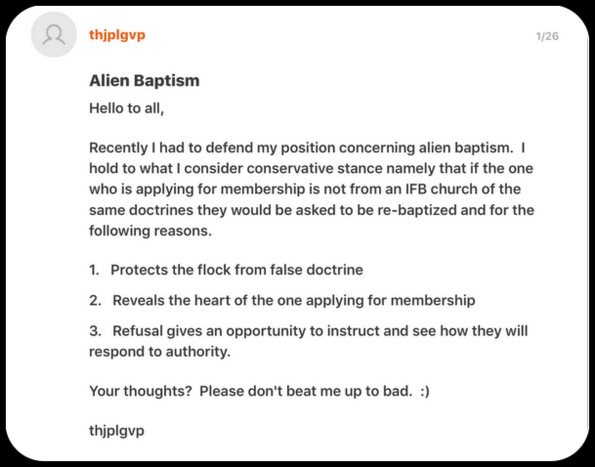 If I were to ask Christian readers to define alien baptism, I suspect very few could do so. Alien baptism? Baptizing creatures from other planets? Baptizing people who are not legal residents of the United States? Nope. In the ersatz world inhabited by Independent Baptists, alien baptism is the re-baptism of people who were saved and baptized in churches other than Independent Baptist churches. If Methodist Joe Smith and his family move to Purity, Kentucky and want to join the local alien-baptizing Baptist church, they would be required to be re-baptized before being permitted to join the church and take communion. Now if an Independent Fundamentalist Baptist (IFB) family moves to Purity, they would not need to be re-baptized. Well, most of the time anyway. The new church pastor, before accepting them as members, would make sure that their previous church was a like-minded Baptist church. If their old church was an IFB church but had different doctrine, the new church might require them to be re-baptized. Got all that?

Baptist successionism (also known as “Baptist perpetuity”) is one of several theories on the origin and continuation of Baptist churches. The tenet of the theory is that there has been an unbroken chain of churches since the days of John the Baptist, who baptized Christ, which have held similar beliefs (though not always the name) of current Baptists. Ancient anti-paedobaptist groups, such as the Montanists, Paulicians, Cathari, Waldenses, Albigenses, and Anabaptists, have been among those viewed by Baptist successionists as the predecessors of modern-day Baptists.

To simplify things for readers: John the Baptist baptized Jesus, so that made Jesus a Baptist. Jesus baptized the disciples, so that made them Baptists too. This means that first Christian church was Baptist (First Baptist Church of Jerusalem). So there ya have it, the Baptist church is the one, true, historic church.

The Campbellite movement (Restoration movement) of the 19th century which birthed the Churches of Christ and Disciples of Christ, found its roots in the Baptist church. Thomas and Alexander Campbell, in an attempt to restore the Baptist church to its apostolic roots, contended that baptism was required for salvation. The Baptists believed that baptism was an outward sign that one has been saved, whereas the Campbells believed baptism was salvific, that sins were washed away in the waters of baptism. Today, Churches of Christ and Baptist churches bitterly fight over which church is practicing New Testament baptism. Most of the debate centers on the word FOR (Greek word eis) in Acts 2:38:

Then Peter said unto them, Repent, and be baptized every one of you in the name of Jesus Christ FOR the remission of sins, and ye shall receive the gift of the Holy Ghost.

The Baptists believe the word for means because your sins have been remitted. Churches of Christ believe the word for means in order to have your sins remitted. Back in the days when I pastored churches in SE Ohio, I would preach sermons against the Churches of Christ. I would then take tapes of the sermons and mail them to local Church of Christ preachers. And they would do the same, refuting my Baptist ecclesiology and soteriology.

But Bruce, doesn’t the Bible says, ONE Lord, ONE Faith, and ONE Baptism? Doesn’t this mean that all Christian baptism is legitimate in the eyes of God? Silly you, to think such things. ONE baptism? Why that is Baptist baptism. All other baptisms are — drum roll please — alien baptisms.