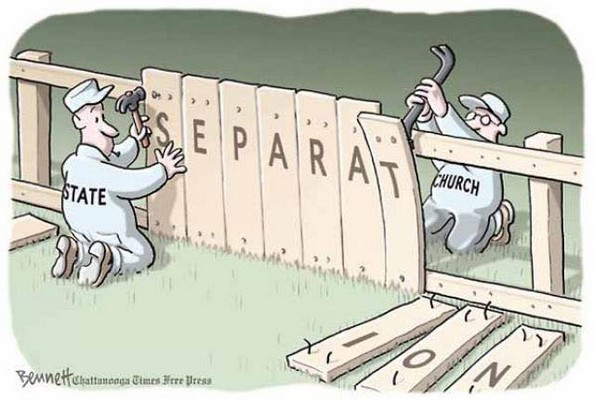 An atheist organization targeted a small-town post office to demand they remove their “God Bless America” banner, but that’s not the whole story.

“Employees are free to ask God to bless America all they want on their own time. The problem comes when they ask their government employer to endorse their personal religious beliefs by plastering them on the side of the federal building,” Freedom From Religion Foundation’s Madeline Ziegler said of their campaign.

According to The Morning Sun, a local fireworks shop printed 1,500 yard signs and banners, which residents plastered across the city.

“Obviously, we’re among the majority that didn’t agree with the decision to take the sign down (at the post office),” Jason Marietta, retail sales director, told The Morning Sun.

Instead of one big sign at the post office, Pittsburg  now has 1,500 across the town, marking the area for God.

The Freedom From Religion Foundation rightly objected to a God Bless America sign adorning the Pittsburg, Kansas post office. Post offices are government buildings staffed by government employees, and as such they are not permitted to promote religion. It is time for Christians to understand that the wall between church and state defined in the Establishment Clause of the Constitution forbids government from endorsing Christianity. This is the law. Don’t like the law? Work to change it. The fact that violations of church and state have gone unnoticed for years doesn’t mean they are in some inexplicable way legal. Just because drivers routinely break the speed limit and not get caught doesn’t mean that speed laws are invalid.

It is outrageous that some would aim to divide a community over a banner that has been proudly displayed since Sept. 11, 2001. I commend the Pittsburg community for rejecting this decision and I stand with them. The Constitution guarantees a right to freedom of religion, not freedom from religion. This banner is not only an expression of faith, but of love for country.

Expressions of patriotism, faith, and community should be welcome in our society and I have contacted USPS officials to express my concerns about their decision and to request their reconsideration. If the local post office branch is unwilling to display the banner, then I would be proud to hang it at my own office in Pittsburg.

This banner has been proudly displayed in the Pittsburg community for nearly 15 years. Should all the owners (who bought the banner) agree my office would be a fitting place to move it to, I would be honored to hang it outside of my office on Broadway Street. Since the attacks on Sept. 11, 2001, this banner has been a patriotic symbol in the Pittsburg community and I would be proud to continue this great tradition.

Since these Kansas government officials and many of the residents of Pittsburg, Kansas seem to lack basic reading skills and have never taken a civics or American government class (maybe they slept through the class), let me illustrate the issue at hand with pictures:

Atheists do not care in the least what signs people put on private property. Woo! Hoo! Pittsburg Christians put up 1,500 God bless America signs on private property. I don’t know of one atheist who objects to this. In fact, I suspect groups like the Freedom From Religion Foundation, American Atheists, Americans United for Separation of Church and State, American Humanist Association, and the ACLU would oppose any attempts to restrict the free exercise of religion on private property. What these groups and the atheists and Christians who support them object to is the breaching of the wall of separation of church and state. The Pittsburg post office violated the law and this is the ONLY reason the sign had to come to down.

I wonder what offended Pittsburg Christians would do if these signs were hanging over the local post office:

I have no doubt Christians in Pittsburg would demand the immediate removal of these signs. Representative Jenkins and Senator Moran would issue press releases calling for the swift removal of these anti-American, anti-Christian signs. There is one word for such behavior, HYPOCRISY. If it is okay for a Christian sign to hang over the post office, then it should be okay the signs of other religions to hang there too. If there is no separation of church and state, then shouldn’t any and every religion have the right to adorn government buildings with their signs?

The real issue is that Christians wrongly think that their religion deserves preference and special treatment. Decades of illegal government endorsements of Christianity are now being called into question. Christians do not like being treated in the same manner as adherents of other religions. Christians think, due to a poor understanding of American history and the U.S. Constitution, that they should be permitted to adorn public buildings and lands with sectarian signs and crèches (along with opening sessions of government with Christian prayers). It is time for Christians to realize that their religion is no longer the tail that wags the dog. The United States is a secular state, and the sooner Christians realize this the better. The separation of church and state protects not only atheists and non-Christians from government encroachment, it also protects Christians. It is this wall of separation that protects all Americans from the theocratic tendencies of many of the world’s religions. History is clear: once the wall between church and state is breached, freedoms are lost and people die. We dare not trust any religious sect, including the fine Christians of Pittsburg, Kansas, with the keys to our republic. Too much is at stake to let even an innocuous act such as hanging a God Bless America banner on a government building to go unchallenged. Our future freedom depends on us beating back every sectarian attempt to scale the wall of separation between church and state.