Celebration Church of Lakeville’s Idea of Making a Difference in the World? Enlarge Their Building

I am convinced that many Evangelical pastors and churches don’t have a clue about the perceived disconnect between what they preach and what they actually do. Take the story of Dennis Erickson, a member of Celebration Church in Lakeville, Minnesota, who died and left his entire estate to the church. In a recent sermon on generosity, Celebration Church pastor Derrick Ross told the congregation, “The Bible says that generosity is also like that, that it will enlarge your world.” Ross said, “generosity will enlarge your world,” yet when asked what the church would do with the proceeds of Erickson’s estate, Ross said the church would build more classrooms and expand its school. Ross proudly crowed, “One year later, his (Erickson’s)  impact will be visible from the road.”

Erickson was a lifelong collector of antique and model cars. CBS News reports:

It’s hard not to be overwhelmed seeing, for the first time, all the model cars, trucks, tractors and buses Erickson collected for six decades, ever since he was 9 years old.

There are more than 32,000, believed to be one of the largest private collections in the world. Some are no bigger than an inch long, but together they are quite the treasure.

The 69-year-old engineer designed cabinets and cases to showcase the collection, which he parked in the living room, bathroom, laundry room, closets, basement and even in the bedrooms.

And Erickson’s devotion runneth over, filling his two garages — five preserved classics, including a 1959 Edsel and Henry Ford’s second mechanical marvel, the 1931 Ford Model A. Erickson would enter these beauties in car shows with his father.

The collection’s likely mid-six-figure price tag will make it possible to build more classrooms at the church and expand its school. Pastor Ross said the congregation has doubled in size in the past nine months.

Erickson, a devoted Evangelical church member, spent 60 years of his life collecting “stuff.”  People are certainly free to live their lives as they wish. I am not a collector, so I don’t understand the satisfaction people derive from collecting things. That said, I am sure the things that matter to me might not matter to others. One man’s junk is another man’s treasure. That’s the beauty of human existence; we are free to do what we want. However, when Pastor Ross attempts to put a religious spin on Erickson’s $500,000 bequest of model cars, well, it is fair to ask how Ross squares a life spent collecting cars with what Jesus said about material possessions.

And he said unto them, Take heed, and beware of covetousness: for a man’s life consisteth not in the abundance of the things which he possesseth.

Surely the sum of Erickson’s life consisted of the abundance of things he possessed — model and antique cars.

I would love to see how Pastor Ross squares these verses with how Erickson lived his life. Again, I don’t care about how Erickson spent his 69 years of life on this earth. Collect, not collect, it matters not. However, when stories such as this are billed as a marvelous example of generosity that will make a real difference in the world, I think it is reasonable for people to question in what way a difference is being made.

I suspect that Celebration Church could have used the money to meet the needs of the widows, orphans, the sick, the poor, and the disenfranchised. If a church desires to follow in the steps of Jesus, shouldn’t it focus on those with the greatest needs? Instead, the Church decided to enlarge its building. Since Evangelical churches are by and large social clubs, Erickson’s donation will benefit, not the community at large, but his fellow club members. Of course, spending the money on community social needs would not leave a monument to Erickson’s largess, nor would it result in more asses in the pews of Celebration.

Perhaps part of the issue is that Celebration is located in an area where poverty is not an issue. According to Wikipedia, only two percent of families in Lakeville, Minnesota are at or below the poverty line. However, all the Church would need to do is expand their vision to nearby St. Paul which has a 24% poverty rate. 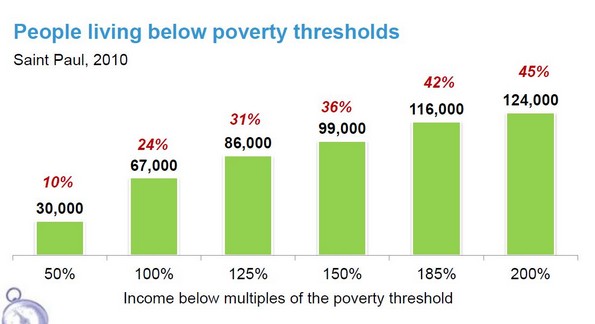 The church became a popular destination for tourists from around the country for its huge “Country Christmas” productions.

Its multiple live shows drew crowds by offering patrons a Branson-styled production that included a mix of Christmas songs, both secular and religious, complete with costumes, dancers, comedians, steppers, singers and musicians.

Lowell Lundstrom and his wife Connie Lundstrom sometimes ended the show by waving to the crowd as they and other family members traveled in a horse-drawn sleigh across the stage.

Just what Jesus would have done, right?

Perhaps I am expecting too much from Pastor Ross and the people of Celebration Church. According to a 2014 Sun This Week article, the church is looking for ways to make a “difference” in the community. Here’s the examples the article gave:

Under his(Lowell Lunstrom) daughter’s leadership, the church last year hosted “The 99,” a massive tent theater production intended to portray real consequences of deadly behaviors before presenting a gospel message; the elaborate production required hundreds of volunteers from the church.

Londa Lundstrom Ramsey (former pastor who abruptly resigned due to charges of financial irregularities by her pastor husband Brent)  appeared before the Lakeville City Council on Aug. 4 to accept recognition for the church’s agreement to dedicate $20,000 over the next four years for a DARTS program in the city that provides transportation to seniors.

From the stories highlighted in this post, we can conclude that Celebration Church’s idea of making a meaningful difference in the community is:

According to an October 2014 Sun This Week article, pastor Londa Lundstrom Ramsey and her husband Brent abruptly resigned over charges of financial impropriety. The Lunstrom’s deny these charges and have picked up their toys and moved nine minutes down the road to start a new church, The Father’s House. According to the aforementioned news article, Celebration Church averages 900 in attendance. While it took me a bit of time to find the seating capacity of Celebration Church, I did stumble upon a conference page that stated the auditorium could seat 1,000 people. I suspect, thanks to the Lundstrom’s bolting and starting a new church a few miles away, that average church attendance is now less than 900. When a pastor feels “God’s leading” to start a new church near her previous church, the new testimony to the factional nature of Evangelical Christianity will siphon off members from the old church. Sometimes, hundreds of people can switch pews, resulting in tremendous financial pressures for the old church. My gut tells me that all is not well at Celebration Church. What better way to take congregants minds off reduced attendance and accusations of financial improprieties than to add unneeded space to the church building. New “stuff” excites saint and sinner alike, and Erickson’s donation being used to enlarge Celebration’s church plant will certainty create a buzz. But alas, as with all buzzes, the new building buzz will fade, and what will remain is a troubled church with a nearby predator who is ready and willing to swallow them alive. Or as I like to call it, just another day in the alternate universe called Evangelical Christianity.

While I am sure Pastor Ross, Celebration Church, Pastor Londa Lundstrom Ramsey, and The Father’s House will likely object to how I have characterized matters in this post, I think I have accurately stated what can be gleaned through news reports and internet sleuthing. I have no objection to how Celebration Church plans to use the monies derived from the sale of Erickson estate. What I do object to is Pastor Ross painting what the church will do with the money as something that will make a meaningful difference in the world. While having new digs will certainly make the congregation happy and give them a delusional sense of doing something “important,” the fact remains that this building program will do very little to make a difference in the lives of the people who suffer in silence outside the doors of Celebration Church. Perhaps Pastor Ross — as planned — will restart the Country Christmas gala. And then church members can seek out the poor and homeless and give them tickets to the big show. Woo! Hoo! Hungry, hurting, and alone they will remain, but at least they will get to see a horse-drawn sleigh as it slowly traverses the stage. I am sure Jesus — if he were still alive — would be proud.