If Salvation is by Grace and Not by Works 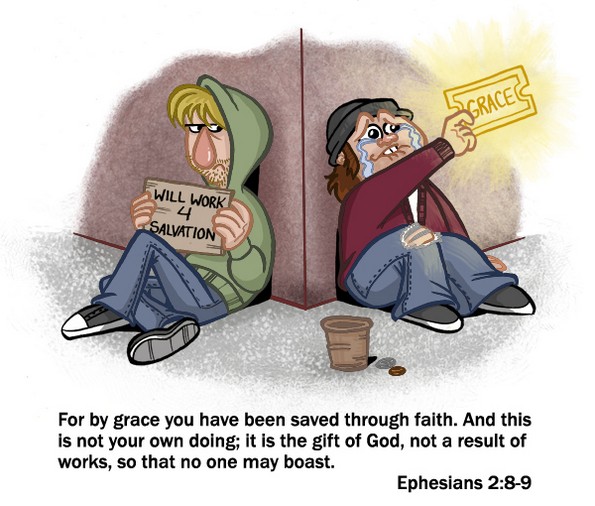 I recently wrote a post about Evangelical outrage over Montel Williams suggesting that the heart of Christianity is good works. Countless Evangelicals schooled Williams about salvation, reminding him that good works play no part in salvation. According to these Evangelicals, salvation is by grace — God bestowing his unmerited favor upon sinners. Are these Evangelicals right? It depends on which Bible verses you read. For example, Ephesians 2:8,9 says: For by grace are ye saved through faith; and that not of yourselves: it is the gift of God; Not of works, lest any man should boast. Seems to the settle the question right? Salvation is by “grace through faith and not by works.” However in the very next verse the Bible says: For we are his workmanship, created in Christ Jesus unto good works, which God hath before ordained that we should walk in them. This verse seems quite clear, well as clear as any Bible verse can be; that those whom God saves are ordained (chosen) by God to have lives that demonstrate good works. There are numerous ways one can argue this issue, but anyone with even a modicum of understanding about the New Testament certainly knows that the Bible makes a clear connection between salvation and good works. People who claim to be Christians yet live in ways contrary to the teachings of the Bible are, at best, Christian in name only. The Jesus who said Follow me surely expects his followers to believe and obey the teachings of the Bible. After all, according to Evangelicals, the Bible is God’s inspired, inerrant, infallible word. It’s God’s blueprint for life, a sure road map for the journey between birth and eternity. Why then, all the Evangelical outrage over Williams’ comment?

A large number of Evangelicals believe that salvation is some sort of  magic pill or eternal fire insurance. At some point in their lives they have had some sort of “experience” with God and now they are Christians. For these Evangelicals, all that matters is believing the right things. And in recent years, believing the right things has come to mean having the right political beliefs. Williams’ comment was in response to Evangelical outrage over transgendered people using the wrong bathroom. Williams rightly pointed out that Evangelical hatred and bigotry towards transgenders was un-Christian. How dare Williams suggest hateful, bigoted Evangelicals aren’t being very Christian! These Evangelicals can recite John 3:16 and parrot “God’s Simple Plan of Salvation,” and that is all that matters. They might believe in the death, burial, and resurrection of Jesus, but fuck those perverts who want to use what Evangelicals consider the wrong bathroom.

These Evangelicals are being quite hypocritical, are they not? If salvation is NOT by good works, how dare they expect or demand people to live by the teachings of the Bible? Aren’t these the same Evangelicals who oppose homosexuality, same-sex marriage, premarital sex, or any other form of sexual expression except a monogamous married heterosexual couple having sex via the missionary position, yet commit the very sexual sins they condemn?  And aren’t these the very same people who make all sorts of moral demands that they themselves are unable to keep? Why should any of us — transgenders included  — follow ANY of the teachings of the Bible? If Evangelicals can’t practice what they preach, aren’t they being hypocritical? Of course they are.

These Evangelicals (and I say these because some Evangelicals do think good works are essential to Christian faith) are the worst that Christianity has to offer. They demand that everyone submit to their religion’s teachings, yet they are ignorant of those very teachings. They expect everyone to obey their interpretations of the Bible, yet they exempt themselves from doing the same. When questioned about the disconnect between what they say they believe and how their live their lives, these Evangelicals remind their critics that they are works in progress or that they are resting on the promises of God. These Evangelicals are ignorant of much of what the Apostle Paul had to say about behavior, choosing to focus on God’s super-duper grace-filled plan for their lives — grace that Dietrich Bonhoeffer called cheap. All that matters to them is where they will spend eternity when they die — heaven. Well that and making sure that there are no transgenders using the wrong bathroom.

You see, these Evangelicals actually DO believe in salvation by works. Every Evangelical has internalized some sort of moral code by which they, in theory, govern their lives. They think that this moral code comes straight from the mouth of God. And if it comes from God, shouldn’t everyone behave the same way? These Evangelicals, despite what they told Montel Williams, believe that there ARE certain behaviors that preclude people from being Christians. Will there be any LGBT people in heaven? Not according to these Evangelicals. In fact, their list of people who will not be in heaven is quite long. These Evangelicals speak out of both sides of their mouth, decrying anyone who says salvation is by works, yet at the same time saying that there are certain behaviors that will land people in hell (and most of these behaviors are sexual in nature). Quite frankly, if THESE Evangelicals will be in heaven, I am quite happy to spend eternity in hell with  Mother Theresa, Gandhi, Prince, homosexuals, Christopher Hitchens, transgenders, same-sex couples, liberals, abortionists, and Barack Obama. According to these Evangelicals, Dennis Hastert and countless other Christian perverts get a free pass because they told God, sorry, and promised to never, ever sexually molest children again. Yet, when Catholic priests diddle young boys and later ask God’s forgiveness, they still go to hell when they die. Why? Because Catholics worship the wrong Christian God. And around and around the Evangelical merry-go-round goes.