Freedom of Speech is a Two-Way Street 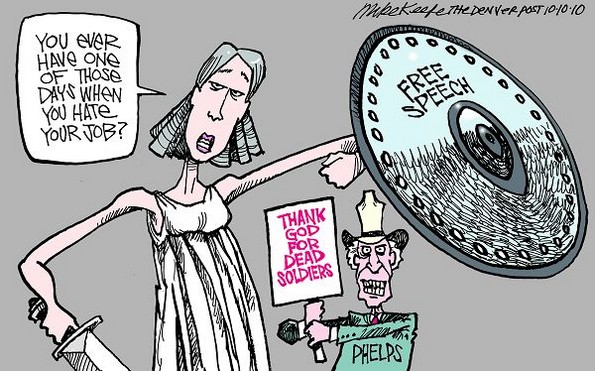 Glenn Beck and the Dixie Chicks have something in common, though neither wants to admit it.

Maines’ statement resulted in a struggle for the Dixie Chicks, particularly in the country music world, where they were boycotted for several years. They made a video documentary which followed them for three years after the infamous London concert. In the documentary, Maines watched a video of President Bush, in which he said, ”They shouldn’t have their feelings hurt just because some people don’t want to buy their records when they speak out. You know, freedom is a two-way street.” Maines then says, “You’re a dumb fuck.”

Last week, Glenn Beck had a guest on his radio show, Brad Thor, and they were talking about a Donald Trump presidency. Here is the transcript; it is long, to provide context.

THOR: BS, BS. Trump does not compromise. Trump has the ability to hire and fire people, to hire contractors, to fire contractors. People who work for Trump can work for him or stop working for him. If he gets into the White House, we have to deal with him.

And I’ll tell you, one of the best examples I have seen of who Trump really is – I have been mistakenly comparing him to a potential Mussolini. And about a week ago, Foreign Affairs did an amazing article about the Caudillos, the strong men of Latin America. And that is who Trump is. He is a Chavez. He is a Peron.

That is the type of guy he is and I guarantee you, Glenn, that during his presidency, during his reign if you will – he is going to petition the American people to allow a temporary suspension of the Constitution so he can help America get back on its feet again.

He is a danger to America and I got to ask you a question and this is serious and this could ring down incredible heat on me because I’m about to suggest something very bad. It is a hypothetical I am going to ask as a thriller writer.

If he oversteps that, how do we get him out of office? And I don’t think there is a legal means available. I think it will be a terrible, terrible position the American people will be in to get Trump out of office because you won’t be able to do it through Congress.

BECK: I would agree with you on that and I don’t think you actually have the voices we’ve been talking about and we’ve been talking about this off-air for a while. I think the voices like ours go away. I don’t think we are allowed – especially if things, and I believe the economy is going to go to crap, even if Jesus was in office. It’s going to naturally reset. It has to.

SiriusXM decided to pull Glenn Beck’s program for the rest of the week and were reviewing his future with the company, saying, “…comments recently made by a guest on the independently produced Glenn Beck Program, in our judgement, may be reasonably construed by some to have been advocating harm against an individual currently running for office, which we cannot and will not condone.”  Beck is being classy and calling Matt Drudge, who broke the story, a “despicable lying scumbag.”  Now, Beck’s spokespeople are crying foul and saying they are being bullied.

So all of that to say this: both made statements that were considered outrageous. The companies who sell their voices had to make a decision. The decision came down to how much risk were these companies willing to take. Obviously, not much. For The Dixie Chicks, people on the left complained that this was a clear violation of their First Amendment rights. For the people on the Beck right (because the Beck right is different from the normal right, or the Palin right or the Cruz right), they are saying that things were taken out of context and everyone but them is a shill for Obama.

I say to them, grow up. This has nothing to do with protected speech, being persecuted or loving President Obama. This had to do with money. Period. The First Amendment stops the government from telling you what to say, not whether private companies can hire and fire you, based on what you say. Both were able to exercise their First Amendment rights and say what they wanted. The Dixie Chicks, or at least Natalie Maines, never had to apologize for what she said and she isn’t in jail. Beck isn’t being carted away by a shadowy government agency for agreeing with Brad Thor. (Thor is backtracking on his statement, too. He said he was talking about a “hypothetical America under a dictator” and not referring to an assassination.)

Glenn Beck has had many years to say whatever he wanted. He makes outrageous claims and has guests who do the same. Now, he is going to pay the price, just like the Dixie Chicks did. They have been allowed to say whatever they want. They just need to remember that other people can say what they want, too. And, people with speak with their wallets as well as their mouths. As George Bush said, “You know, freedom is a two-way street.”