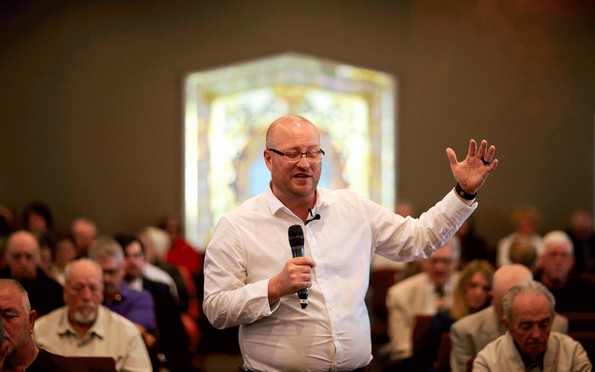 Richie Clendenen is the pastor of Christian Fellowship Church in Benton, Kentucky. One out of every four residents of the Blue Grass State attends a Baptist church. One out of three Kentuckians self-identify as Evangelical. Kentucky is the state that gave us Kim Davis and Ken Ham, and is currently governed by Southern Baptist Matt Bevin. By all accounts Kentucky is, from stem to stern, a Christian state, yet Pastor Clendenen thinks Evangelicals are being persecuted. Clendenen recently stated:

I never thought we’d be in the place we are today. I never thought that the values I’ve held my whole life would bring us to a point where we were alienated or suppressed.

The Bible says in this life you will have troubles, you will have persecutions. And Jesus takes it a step further: You’ll be hated by all nations for my name’s sake.

Let me tell you, that time is here.

There’s nobody hated more in this nation than Christians. Welcome to America’s most wanted: You.

Clendenen confuses persecution with being forced to treat all people with respect. Clendenen thinks those of us who demand justice, fairness, and equal protection under the law are persecuting Evangelicals, yet he provides zero support for his claim. Are Clendenen and his fellow Evangelicals free to worship as they please? Are they free to verbally attack gays, Muslims, Transgenders, atheists, socialists, secularists, Democrats, and Barack Obama from the pulpit? Are Evangelicals free to bar anyone who doesn’t believe as they do from attending their churches? Yes, yes, and yes.

Clendenen is 38 years old. He grew up in an era when Evangelicals wielded great political power. But, the times, they are a-changin’, and Evangelicals have lost their seat at the head of the cultural table Thanks to the LBGTQ community, secularists, atheists, humanists, liberal Christians, and the fastest growing religion in America — the NONES — Evangelicals are no longer the cultural authority on moral and ethical issues. Preachers such as Clendenen view their banishment from cultural discussions as persecution. These preachers of intolerance and hate demand, like toddlers who stomp their feet when they don’t get their way, that everyone bow in obeisance to the Christian God and their peculiar interpretation of the Protestant Bible. And when millions of Americans say NO? Stop persecuting us, cries Clendenen.

Clendenen is right about one thing. An increasing number of Americans DO hate Evangelicals. Evangelicals are now the face of bigotry, homophobia, and misogyny. Evangelicals oppose all forms of sexual expression except virgin-before-marriage, monogamous, married, heterosexual, only-with-a-Christian, missionary-position, God-glorifying intercourse. Evangelicals are anti-abortion, anti-immigration, anti-social-progress, and  anti-science. Granted, I am painting with too broad a brush, but Evangelicals need to understand that this is how they are perceived by non-Evangelicals. If Evangelicals want to change how they are viewed by others, I suggest that they shut the hell up and devote themselves to ministering to “the least of these.”

Pastor Clendenen was a Ted Cruz supporter, as were many of his fellow Evangelicals. Cruz is an arrogant, bigoted Christian nationalist, yet Clendenen thinks Cruz would have made a wonderful President. Can he not see that his support of Cruz is yet another reason non-Evangelicals despise the people who claim to be the purveyors of True Christianity®? And now many Evangelicals are supporting fascist Donald Trump. Trump is the most unqualified man to ever run for President, but Evangelicals have backed themselves into a corner with their fawning support of all things Republican, and they are now obligated to vote for a misogynistic, racist, narcissistic, KKK-approved blowhard.

So yes, many Americans hate Evangelicals, and the Pastor Clendenens of the world have no one to blame but themselves. Instead of following in the footsteps of Jesus, Evangelicals spread their legs wide and gave themselves to the Republican Party. Impregnated with power, Evangelicals brought to life a hateful ideology that has caused untold harm. Over the past year, Americans have watched as Evangelicals hysterically attacked gays, immigrants, same-sex marriage, and Transgenders. Oozing revulsion from every orifice, Evangelicals, along with their Republican overlords, have become the party of hate. And to this I say, to quote Evangelical Texas Lt. Governor Dan Patrick:

If you have not already done so, Please read Why I Hate Jesus.