How Do You Tell Evangelical Relatives You No Longer Believe in God? 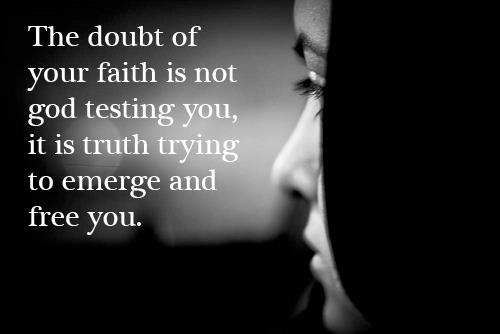 Guest post by Gary. You can read Gary’s blog here.

Yesterday, I and my family spent the afternoon with some of my evangelical Christian relatives from a distant city whom we had not seen for quite some time. The last we had spoken I was a “gung-ho” evangelist for conservative Lutheranism, attempting to convert them to the “correct” version of Christianity. So if the subject of religion/faith came up, how was I going to tell them that I was no longer a conservative Lutheran; a conservative Christian; a Christian…period?

It would be awkward.

If you are a regular reader of this blog, you might be surprised to learn that I had no interest in bringing up my deconversion from Christianity with these relatives. I usually love a good debate (argument) over religion or politics, but not with these people. Not on this subject. I knew it would hurt them. I knew that they genuinely care about me and the knowledge that I have “rejected Jesus” would be shocking and painful for them to hear.

Our visit remained off the topic of religion for several hours, but after a pause in the conversation, my cousin asked, “So how are things with your (Lutheran) church?”

There was silence. I could feel the tension in the air as both my father and my wife cringed and both thought to themselves, “Oh boy, here it comes!”

My father tried to play defense for me and said, “Gary isn’t going to church right now.”

There was an uncomfortable silence.

“It’s probably best we don’t talk about it,” I said.

But that answer left too much hanging in the air. They needed an explanation.

There was an uncomfortable pause.

“On what basis have you made that decision?”, they politely asked with obvious disappointment in their eyes.

And from there I tried to explain why after over forty years of being a Christian I had “abandoned” Jesus as my personal Lord and Savior. I explained why I had found their evangelicalism, the religion of my childhood, so frustrating and disappointing. “It is based so much on what one feels,” I said. “In evangelical churches I was repeatedly told that if I was a true believer I would feel Jesus “move” me, “lead” me, “guide” me. I would hear an inner voice speak to me. But I never had the emotional highs that everyone else around me seemed to always be having. I never heard a voice. I became tired of the emotional roller-coaster of attempting to feel the presence of Jesus to confirm my eternal security, my salvation, and left evangelicalism.”

“That is why I loved conservative Lutheranism!” I explained. “My assurance of salvation was no longer dependent on how I felt but upon the objective act of God: his seal of salvation at my Baptism. Like Luther, I could look to my baptism as absolute proof of my salvation, not look to how I felt about my faith at the moment!

I was very happy and content as a confessional (conservative) Lutheran.

But then one day in early 2014, while surfing the internet, I came across the blog of an ex-fundamentalist Baptist pastor who had become an atheist [Bruce Gerencser]. I decided that all this man needed was to be pointed to the “correct” version of Christianity (conservative Lutheranism) and then he would abandon atheism and come back to Jesus Christ. I decided I would bring this “lost sheep” back to Jesus.

Four months later…I was an agnostic.”

“But why?” they said. “What did this man say that changed your mind?”

I then explained that this atheist ex-preacher had pointed me to the books of NT scholar Bart Ehrman. “You’ve heard of Bart Ehrman, haven’t you?” I asked.

No. They had never heard of him. (Evidence to me that they had never seriously questioned or examined the veracity of their belief system.)

“Well, Bart Ehrman is a former evangelical turned agnostic NT scholar who has written several books on the New Testament. For instance, in reading his books, I found out that the existing manuscripts of the Bible contain many scribal alterations and additions. We as evangelicals have been taught that God preserved his Word. How is it then possible that God allowed his Word, the Bible which we have on our night stands, to contain passages that the original authors never wrote?”

“But I have read the books of Christian scholars. I read the entire 800 plus page book of NT Wright on the Resurrection. I have read both sides and bottom line the evidence for the pivotal claims of evangelical and conservative Christianity, the inerrancy of the Bible and the historicity of the Resurrection, are based on false assumptions and little if any real evidence.”

“I think the problem is that Lutheranism didn’t teach you correctly about salvation…” interrupted my cousin.

“But I became a Christian when I was still a Baptist/evangelical. I believed in Jesus as my Lord and Savior and asked him to be the Lord of my life prior to being baptized. I was born again. But, now I no longer believe.”

“Then you never truly believed,” responded another cousin. “It is impossible to be saved and then not believe. You were either never saved to begin with or one day before you die, you will return to the Faith.”

“But I really did, sincerely and with all my heart, believe in Jesus as my Lord and Savior, repented of all my sins, and called on Him to be the Lord of my life!” I protested.

“No. You obviously didn’t really believe,” they agreed.

How do you prove to someone else that you really believed something? It’s impossible. (I was back to my original issue with evangelicalism: The act of salvation is internal and subjective.)

And how could I present to them all the evidence against the veracity of the supernatural claims of Christianity that I had learned over the last two years in one brief conversation? I couldn’t. So we agreed to not talk about it further. We agreed to go back to “pleasantries”. But the mood had changed. They told me that they loved me and that they would be praying for me. I told them that I loved them and that I very much appreciated their concerns.

Shortly thereafter, we said our goodbyes and parted ways.