If the Evangelical God Revealed Himself to Me, Would I Believe? 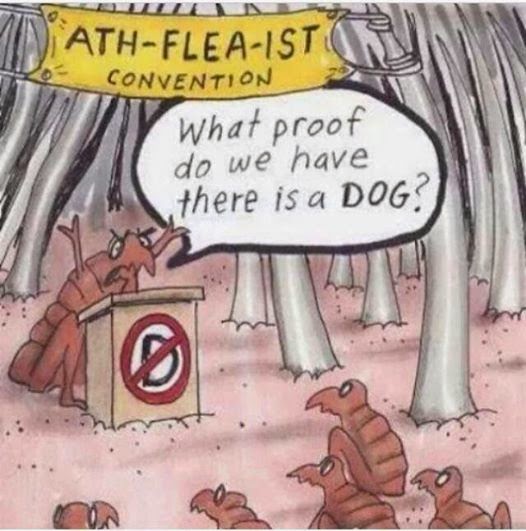 I am often asked what it would take for me to believe in the Evangelical God. Is there anything that would cause me to discard atheism and embrace the God whom Evangelicals say is the Creator of everything and the savior of everyone who puts their faith and trust in Jesus Christ?  Am I so set in my atheistic/humanistic ways that there is nothing that could persuade me to return to the Christianity I abandoned eight years ago?  Simply put, what will it take for me to fall on knees and repent of my sins, professing that Jesus Christ is my Lord and Savior?

Many Evangelicals, of course, believe that no amount of evidence would be enough to convert someone such as myself. I am a reprobate, an apostate, a sworn enemy of the Evangelical God. I have crossed the line of no return. My destiny is already settled, with a first-class accommodation in Hell and the Lake of Fire awaiting me after I die. According to the Bible, I am the pig that has returned to the mire and the dog who has returned to his vomit. I have trampled under my feet the blood of Jesus, and there remains no further sacrifice for my sins. Christian evangelizers are told not to waste their time on the Bruce Gerencsers of the world. Let them go to the hell they so richly deserve!

Other Evangelicals think that I am still saveable. With God all things are possible, they say.  Imagine what a testimony to God’s wonderful grace it would be if the preacher-turned-atheist Bruce was brought low before the thrice-holy God and saved from his sins. Years ago, I remember being taught in evangelism class that the best way to reach a community for Christ is to find the meanest sinner in town and lead him to Christ. While I am not a mean person, I am considered the village atheist, a man who hates God and Christians. Get me saved, and r-e-v-i-v-a-l is sure to follow. Or so local Christians think, anyway.

Many Evangelicals believe that God has given me all the evidence I need in order to believe. The Evangelical God has revealed himself to me through creation, conscience, and divine revelation (the Bible). God has done all the revealing he intends to do. If this is not enough for me, I can go straight to hell.

Wait a minute, what is there in creation that proves to a rational, reasonable man that the Evangelical God is one true God, and that forgiveness of sins and salvation are through Jesus, the second God of the Trinity? When I peer into wondrous darkness of a starry night, I am filled with awe and wonder. When a harvest moon rises in the east, giving off its larger-than-life orange glow, I am reminded of the awesomeness of the universe.  All around me I see wonders to behold. As a professional photographer, I often spend time peering at the complexities and beauty of nature and wildlife. Even the feral cats resting underneath the nearby post office box cause me to pause, watch, and enjoy. Everywhere I look, I see things that cause me to stop, reach for one of my cameras, and shoot a few photographs. Not far from where the aforementioned cats hang out, there are sheep and goats who often entertain me when I have time to stop and take their pictures. And don’t get me started when it comes to my family. There are times when everyone is over for a holiday — all twenty-one of us, aged two to sixty — that I quietly sit and watch my children and grandchildren. I think to myself, man, am I blessed. With all the health problems I have, I am lucky to be alive, fortunate that I have the privilege to love and be loved. Does all of this, however, say to me, the Evangelical God is real, that Christianity is the one true religion? No, it doesn’t. At best, all that I have experienced tells me that perhaps there is some sort of divine power, a God of sorts, that has set in motion life as we know it.  Perhaps — though I doubt it — there is a deistic God who created the universe and then went on vacation, leaving the future of planet earth and its inhabitants up to us. This is the God of some of the people who read this blog, and while I don’t believe in their God, I do understand how they came to believe as they do, and I respect their viewpoint. And they are okay with my unbelief, as is their God. 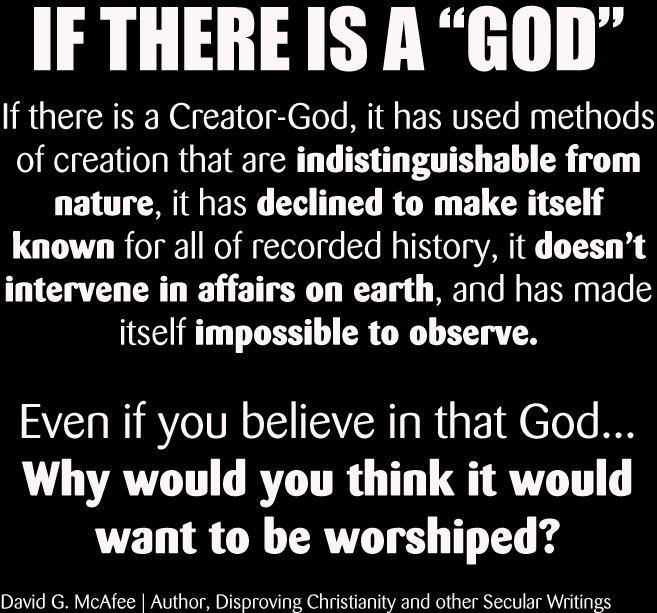 I have yet to have an Evangelical satisfactorily explain to me how anyone can rationally surmise that their God is the one true God just by looking at starry skies or biological world. I am willing to concede, as I mentioned above, that it is possible to conclude that some sort deistic creator put the world into motion and then said, there ya go, boys and girls, do with it what you will. But, pray tell, what evidence is there for this generic creator God of sorts being the Evangelical God? Well, the Bible says ___________, Evangelicals say, and therein lies a big, big problem. Evangelicals are, for the most part, literalists. When they read the creation account recorded by an unknown author in Genesis 1-3, Evangelicals conclude that their God created the universe in six twenty-four days, exactly 6,022 years ago. Yes, I am aware that some Evangelicals are NOT young earth creationists, not that this really matters. Whether young earth or old earth or any of the other creation theories espoused by Evangelicals, they believe that the foundational authority is the first three chapters of Genesis.

Using the Bible as a tool to prop up what can be viewed with human eyes only causes greater doubt and unbelief. Why? Because what the Bible says about the universe runs contrary to what science tells us. Astronomy, geology, cosmology, archeology, and biology all tell us that what the Evangelicals believe the Bible says about the universe is false. Of course, Evangelicals are taught that the Bible is the final authority on everything, including how and when the universe came into existence. When science conflicts with the Bible, the B-i-b-l-e — the inspired, inerrant, infallible Word of God — not science, is always right. As science continues to push creationism closer and closer to the dustbin of human history, Evangelicals are forced to defend beliefs that are no longer rationally defensible. So anyone telling someone such as myself that creation — when viewed through the lens of the Bible — proves the existence of the Evangelical God will be met with ridicule and laughter.

The Bible, despite Evangelicals believing otherwise, is no longer a credible source of proof for the existence of God. Evangelicals believe that divine revelation (the Bible) is another way that God reveals himself to us. Unfortunately, thanks to the internet and authors such as Bart Ehrman and Robert Price, the Bible can no longer be used as proof for anything. Now that there are countless blogs and websites dedicated to deconstructing the history and teachings of Christianity and the Bible, it is increasingly hard for Evangelicals to continue to promote and sell the party line. The Bible is not worthless. There are teachings, maxims, proverbs, and such that people, religious or not, find encouraging and helpful. The same, however, could be said of a plethora of religious texts, so the Christian Bible is not special in this regard. 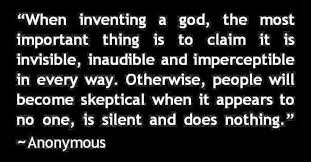 Having read the Bible dozens of times from cover to cover, spending thousands of hours studying its words, books, and teachings, I see nothing that would convince someone not already initiated into the Evangelical cult that the Christian God is the one true God and all other Gods are false. The fact remains that the Bible is not what Evangelicals claim it is, and the only people who believe that the Bible is some sort of supernatural book are those raised in religious sects and tribes that embrace inerrancy. Such people believe the Bible is inspired and inerrant because they either don’t know any better or they refuse to change their beliefs — facts be damned. Extant information, available to all who can read makes one thing clear: the Bible is not what Christians say it is.

Evangelicals also believe that their God reveals himself to humans by giving all us a conscience. Supposedly, the conscience that God gives us is some sort of moral regulator. According to Evangelicals, everyone is born with an innate understanding of right and wrong. God, they say, has written his law on our hearts. If this is so, why do parents need to teach children right and wrong? Why is it that geography and tribal identification, not God, determines moral and ethical beliefs? If the Evangelical God’s law is imprinted on everyone’s hearts, shouldn’t everyone have the same moral beliefs? Of course, they don’t, and doesn’t this mean that there must be some other reason(s) for moral belief other than God? That atheists are moral and ethical without believing in God is a sure sign that these things come from something other than a deity; things such as genetics, parental training, tribal influence, education, and environment.

The fact is, for atheists such as myself, creation, conscience, and the Bible do NOT prove to us the existence of the Evangelical God. Sorry, Evangelicals, I have weighed your evidence in the balances and found it wanting. What then, Bruce would it take for you to believe in God? Is there anything that God can do that would cause to believe?  Sure, there is. Let me conclude this post with several things the Evangelical God could do to prove to me his existence. All of these are within the ability of the I can do anything Evangelical God:

Truth be told, I doubt there is anything that can be said or done that would convince me of the existence of the Evangelical God. I have carefully weighed the extant evidence and found it wanting. Since it is unlikely that any new evidence is forthcoming, I am comfortable with saying that the Evangelical God is the mythical creation of the human mind, and I need not fear or obey him.