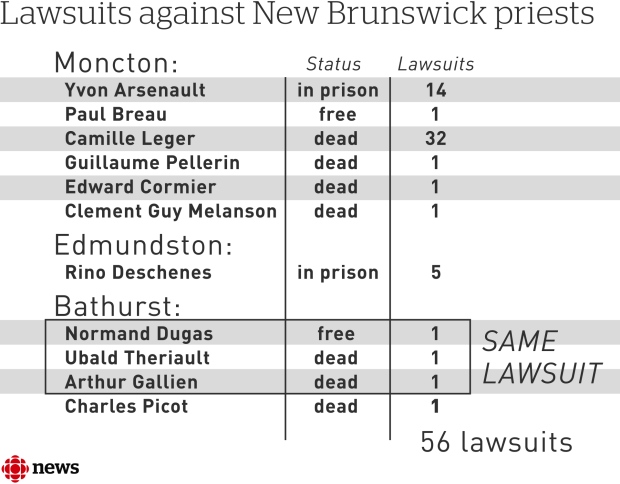 Almost every month for a year, lawsuits have been filed against the Catholic Church in New Brunswick by alleged victims seeking compensation for sexual abuse by priests.

Many of the priests are dead, but that hasn’t stopped the lawsuits in Moncton, Bathurst and Edmundston from piling up.

CBC News has found at least 56 lawsuits are still before the courts, despite an extensive conciliation process a few years ago.

At least 11 priests are targeted in the accusations, and one name appears far more often than others.

“We are going through a very difficult time. It certainly has not helped our credibility, as priests and as a church.”

Thirty-two of the accusations are against one individual — Camille Leger.

Leger was the priest in the Sainte-Thérèse-d’Avila Parish in Cap-Pelé between 1957 and 1980. He died in 1990 without ever being accused or convicted of any crimes. His accusers all came forward after his death.

The archbishop said he was surprised by the sheer number.

According to the court documents, most of Leger’s alleged victims were young boys, generally between seven and 15 years old.

Many of them were altar boys at the parish, or boy scouts, who were chaperoned by Leger.

They all allege in court documents that Leger developed a close relationship with them, where he was able to be alone with them.

The sexual abuse often took place in Sainte-Therese-d’Avila church itself, in Leger’s car, during church-organized trips or at boy scout camp, it’s alleged.

Between 2012 and 2014, retired judge Michel Bastarache, who was brought in by the church, spoke to hundreds of victims and worked out a compensation formula for the church to pay them all.

In the end, the Archdiocese of Moncton had to come up with $10.6 million for victims, and the Diocese of Bathurst $5.5 million.

Victims received between $15,000 and $300,000, depending on the severity of the abuse, how old they were when it started, and how many years it lasted.

Bastarache said the conciliation process had to be delayed three times to accommodate new victims, which is why he’s taken aback by so many lawsuits still before the courts.

“I’m just surprised that the numbers are so high,” he said.

He also wonders why these alleged victims didn’t take advantage of the process and are choosing to go to court instead.

“I heard about a hundred victims in Bathurst, another hundred in Moncton, and those people — 90 per cent of them, wanted absolute confidentiality,” said Bastarache.

“A lot of them never told their story to anyone, not even in their family.”

The Catholic Church is named in all the lawsuits, accused of knowing or saying it should have known about the alleged abuse.

The allegations haven’t been tested in court.

One lawsuit claims the church knew Leger took an unusual interest in children, that some parents had made complaints about him, that he spoke of his “sins” to other priests during confession, and that he was even reported to archdiocese officials for sexual misconduct, yet nothing was done to stop the abuse.

Fernand Arsenault, a priest for 20 years before he chose to leave the church, knew members of the community and is saddened every time he hears of new allegations of sexual abuse.

He accused the church of turning a blind eye to the abuse and concealing the crimes of those priests.

“It’s a terrible mistake,” said Arsenault. “Because we would have saved many lives.”

Arsenault said that years ago, if a priest reported another priest, he would have been punished, not the abuser.

But the church, in every filed statement of defence, has systematically denied knowing about any of the abuse at the time.