A Plea From a Chronic Pain Sufferer: Please Be Aware of Others 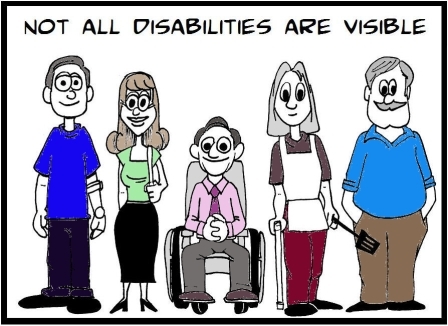 I have spent the past two decades battling Fibromyalgia, osteoarthritis, and neurological problems. I say battling, but perhaps I should say, being BATTLED, by people who are often unaware of their surroundings. Not a day goes by without never-ending, unrelenting bodily pain. Even with being on narcotics and NSAIDS, along with steroids and muscle relaxers, I find that the pain remains. Without the drugs, the pain is unbearable. With the drugs, I can have what my doctor calls “quality of life” — quality, of course, being loosely defined and I suspect meaning something different to my doctor from what it means to me. I could take drugs that make me oblivious to the pain, but there’s no “quality” in such a life — at least for me. If I want to drive, attend my grandchildren’s school events, and photograph high school sporting events, I must accept a certain level of managed pain; pain that is not so severe that doing most anything is impossible.

In the eyes of many people, I look quite normal. Yes, I walk haltingly with a cane, and probably should have a “slow-moving vehicle” sign attached to my ass. Aside from this, I hide my pain well. Family and friends, of course, are well acquainted with my suffering, and usually go out of their way to make things easier and less painful for me. It is when I come in contact with the public that I often find myself beaten and battered by people who seem clueless about how their behavior affects others around them, especially someone such as myself, who doesn’t need any more pain added to his plate.

Tonight, I went to a high school basketball game. I arrive at games early so I can secure a front row seat. This allows me to have a court-level view of games. My daughter with Down Syndrome — we are quite a pair, she and I — usually sits in the row in back of me, slightly to the left or right of my back. By doing so, she typically wards off people from sitting in back of me. Not tonight. Ten minutes prior to the start of the junior varsity game, a middle-aged couple and their early-20s daughter planted themselves directly in back of me. For the next three hours, I was subjected to knees, feet, and purses being pushed into my back. After being battered during the first game, I decided to sit on the edge of my seat, hoping that this would place me beyond their reach. Unfortunately, the unaware batterers saw my move as an opportunity to increase their real estate, and the thumps, bangs, and jabs continued.

If I was a cranky curmudgeon, perhaps I would have asked them to stop, but instead, just as I have done for years, I endured their cluelessness. I don’t expect people to innately know that a chronic pain sufferer is sitting in front of them. That said, it perplexes me that so many people never learned to be aware of their surroundings, nor did they learn to pay attention to how their behavior affects others. My children were taught at an early age to pay attention to who is around them. Respect the space of others, and don’t do anything that could cause harm to someone else. I have been kicked half to death by more booted five-year-olds than I can count. Kids are kids, and I don’t expect them to necessarily understand respecting the person of others. However, these little kickers have parents who should, at their advanced stage of development, understand that their children beating on a man who looks like Santa Claus is not respectful and can, if Santa is so inclined, result in Little Johnny getting coal in his stocking on Christmas.

My children will tell you that I was hyper-aware of my surroundings, never wanting to do anything that would inconvenience or harm others. I passed this awareness on to them, and I see it in the behavior of my grandchildren. Learning simple things such as not standing in the middle of the grocery aisle blocking the lane or running up and down bleachers causing them to bounce — both of which can and do affect others — should be part of standard child training. My grandchildren have had to learn that, yes, I want to hug each of them, but they mustn’t launch themselves into my lap, causing me pain, or, in some instances, sending my testicles into my eye sockets. My grandchildren know that they must be gentle with Gramps, not because I will yell at them if they don’t, but because the fact of their doing so means they understand, at some level, my physical struggles.

I realize there will be times when people inadvertently run into me. Such is life. But what bothers me is people who seem to have no awareness of anyone but themselves. I feel, at times, when such people physically assault me, that they are saying to me, Hey old man, get out of my way. Move it, I have got places to go and people to see. (I do all I can to stay out of the way, knowing that other people are busy and have things to do. I consciously try to make it easy for people to avoid contact with me.) Smartphones have made such behavior worse. People zoned-out on their phones careen through stores and public places with nary a thought about the people around them. This is one of the reasons that I avoid department stores during the holidays. After being repeatedly banged into with shopping carts and oversize purses as women pass by, I find my anger increasing, and I begin to have thoughts of clobbering someone with my cane. I know having such thoughts is normal, but I find it better to avoid supermarket Mike Tysons if at all possible. On more than one occasion, my wife has arrived home from work at 1:30 AM and I have said to her, Hey, let’s go to the grocery! Why? you ask. Simple, there are very few people shopping at the local Meijer or Walmart at 2:00 AM. I don’t have to worry about cart kamikazes running me over or “important” people rushing through the store, binging and banging into people like a steel ball in a pinball machine.

Chronic pain sufferers, along with people with chronic diseases, will likely say AMEN to this post. They, unfortunately, understand exactly what I am talking about. My plea to healthy bipeds is that they be aware of the people around them and pay attention to how their behavior affects others. Kindness, compassion, and respect go a long way towards helping people such as myself to have public forays without coming home feeling like we’ve been hit by a truck. No one can cure me or make my pain go away. All that I ask is that they lift up their eyes and survey their surroundings. See the man walking with a cane? Don’t push your shopping cart quickly around him and then stop on a dime, forcing him to tense up his entire body to avoid running into you. See the man haltingly walking down the bleacher aisle. Wait. Let him get down the steps and on solid footing before you hop on the autobahn and swiftly pass him by. And above all, respect his personal space, as he most certainly does yours. Someday, you might be cursed to walk in his skin, and I guarantee you that you will then want people to pay attention and not do things that further hurt you.