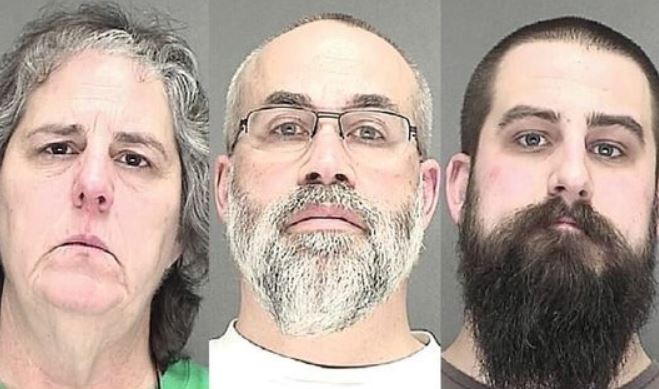 Sharon Windey stands accused of abusing and neglecting her adopted children. As of the writing of this post, her husband, Donald, nor their biological son Steven, have been charged with a crime. The Green Bay Press reports that charges against the father and son are forthcoming. The father is sitting in jail, unable to post bond. The son posted a cash bond and was released. Their next court date is March 9, 2018.

The following article does not mention the name of the church attended by the family. it will be interesting to find out exactly where Sharon and Don Windey learned their child-rearing “skills.”

A De Pere woman and former Wisconsin State Trooper has been charged with several counts of child abuse and neglect of her adopted children. The abuse allegedly went on for over a decade despite reports to police and officials.

Sharon Windey, 54, appeared in Brown County court Thursday on charges of physical abuse of a child; strangulation and suffocation; battery; child neglect; and mental harm to a child.

A 42-page criminal complaint obtained by Action 2 News details years of emotional, physical, and mental abuse inside the Windey home.

The complaint states the investigation found “overwhelming” confirmation that since 2006, there have been Child Protective Services referrals, police contacts and reports from school officials about the three children being victims of physical abuse, mental abuse, child neglect and inappropriate sexual contact in the home on Sullivan Street.

On Feb. 12, 2018, De Pere Police assigned a sergeant to investigate reports of possible abuse at the home where the children lived with Sharon Windey, her husband Donald Windey, and the couple’s 25-year-old son Steven Windey. One of the kids described Steven as a “third parent.”

Both girls said the parents used “excessive feedings of oatmeal” as a punishment. The boy once threw up the oatmeal and the father “made him eat his own vomit and the oatmeal,” reads the complaint. The father told the boy “people were dying in Africa and he needed to eat the puke and oatmeal.”

One of the girls described locks on the freezer, cabinet and pantry.

One girl told investigators that her dad would make her sit on his lap and he would kiss her on the lips. She said he would also touch or grab the girls in other places on their bodies.

She also talked about a punishment in which the kids were forced to strip down to their underwear and kneel in front of a fireplace.

The kids described a shower punishment. If they took a shower longer than seven minutes, they would have to pay money for every minute they go over.

One of the girls said the parents are “very careful” to try not to leave visible marks on them.

The boy described the parents as “delusional … religious freaks.” The boy said his dad hears his guardian angel who tells him what to do.

“They are outgoing and they try to put up the facade of being the perfect family outside of our house,” the boy told investigators. “They will scare us with punishments. They will take things out of our room. For being disrespectful, they will hit them; slap them across the face and stuff. The hitting has happened multiple times.”

The boy described the day of Feb. 11, 2018. He said Donald wanted the kids to go to church but they refused. The father told them to clean everything out of their rooms. One of the girls was denied medicine for not going to church. He said the mom started struggling with one of the girls. During the struggle, the mother was pushed down the stairs. The boy said Steven heard the commotion and charged at him and started to punch him in the head.

The police arrived at the home. The boy said the officers told Sharon and Steven to call the police earlier so it doesn’t escalate to this point. The officers left.

Later there was another fight when when of the girls wanted medicine. After the fight, the kids went to a friend’s home. The man at the home called police to report the abuse.

Neither Donald Windey or Steven Windey have been charged. They are identified by name in Sharon Windey’s criminal complaint.