My Life as a Street Preacher — Part Three 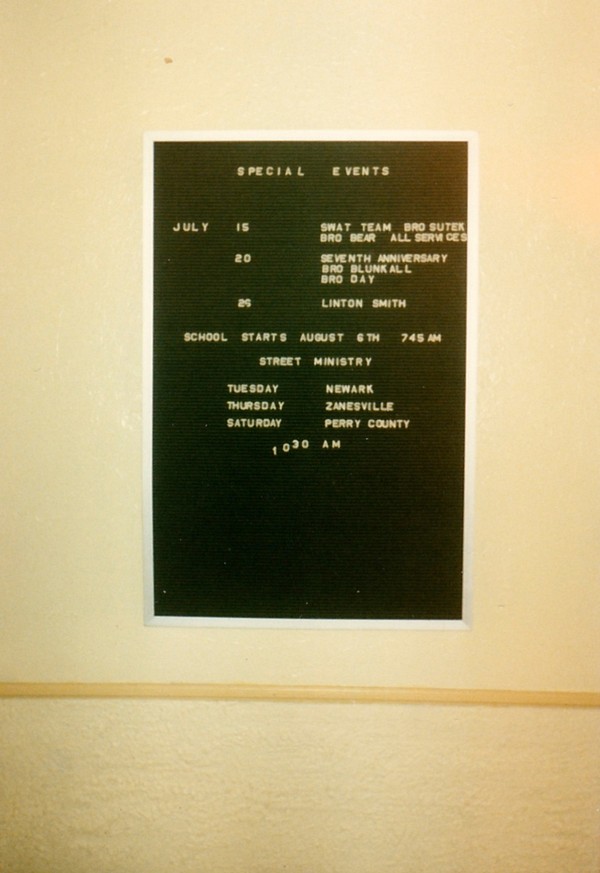 My primary focus as a street preacher was to loudly preach the gospel so that passersby could clearly hear me and ponder my words. Doing so, required me to make sure I preached from a spot that used nearby buildings to amplify my voice. Making sure that vehicle noise didn’t drown out my voice was also important. The goal was to be clearly heard one block away from where I was preaching. Some men didn’t have a voice suited for street preaching. My voice, on the other hand, had tonal qualities that allowed it to carry and to be easily heard farther down the street. My mentor, Don Hardman, also had a voice that carried.

Preaching six to eight times a week, over time, took its toll on my voice. I, at one time, had a nice tenor voice. For many years, I led the music in the churches I pastored, and Polly and I would, on occasion, sing special numbers. Our three oldest sons not-so-fondly remember being roped into singing Jesus is Coming Soon with their mom and dad. (These sons later started playing guitar and bass, and became quite proficient musicians.) While I will still belt out this or that tune, my frequent preaching gave my voice a roughness from which I have not recovered to this day.

Publicly standing on a street corner with Bible held high, preaching to passersby, I naturally attracted a lot of attention. Previously, I mentioned my interaction with law enforcement and business owners. I also had opportunities to interact with several news reporters. A reporter for the Newark Advocate wrote a story about my street preaching and my use of Christian school students to hold signs and hand out gospel tracts. As I reflect on the quotes that were in the article from Somerset Baptist Academy students, I find myself thinking these children sounded an awful lot like the children of Westboro Baptist Church and the Phelps clan. My notoriety as a Fundamentalist street preacher and pastor also gave me opportunities to share my views in Zanesville Times Recorder. I wrote frequent letters to the editor, decrying the very sins and behaviors cultural warriors decry today. My letters attracted a lot of attention — so much so that editor of the Times Recorder asked me to write a regular column for the paper’s editorial page.

Of course, not all Christians were thrilled about my street preaching. They thought of my street preaching was vulgar speech, unworthy of the name Christian. More than a few “followers” of Jesus were embarrassed by my preaching. I reminded them that Jesus, Paul, Peter, John the Baptist, and other followers of Jesus were street preachers. Some of the most revered names in American Christianity were street preachers (open-air, public) too: John Wesley, Jonathan Edwards, D.L. Moody, and George Whitfield, to name a few. British preachers such as William Booth and Charles Spurgeon were also street preachers. The question then, for me was, why every pastor wasn’t a street preacher? Not one of my colleagues in the ministry joined me on the streets. They preferred the safety and the security of preaching to the choir than the wildness and unpredictability of the streets. Some of these men of God attempted to use the “I’m not called” copout, but I reminded them that Jesus commanded us to take the gospel to the whole world, and staying comfortably inside the four walls of the church, safely evangelizing the few unsaved people who wandered in, was not what Jesus had in mind. Truth be told, I think some of my fellow pastors were embarrassed by my street preaching. One year, I spent an evening preaching to the crowd attending the Bryan Jubilee in Bryan, Ohio. A pastor whom I knew well was also at the Jubilee, but he spent the night pretending he didn’t know me. I thought, at the time, Peter denied Jesus too.

While my preaching was loud, direct, and filled with Bible verses, I did not attack people or call them names. I preached a simple version of the gospel, reminding people that hell was real, death was sure, and only Jesus saved. Other street preachers were not as respectful as I was. Some men loved calling names and arguing with people. One Saturday, I was preaching near the City Center Mall in Columbus, Ohio with the late Jimmy Hood and a group of men from his church. While we were preaching, several Mormon missionaries engaged some of the men in discussion. Soon, the discussion became heated, with the Baptists vehemently arguing with the Mormons. The missionaries politely excused themselves from the discussion and walked away. The Baptists jeered and shouted repeatedly, there goes the MORONS! Their caustic behavior angered me to such a degree that I told the men who were with me that we were heading for home; that I wasn’t going to be a part of any group that treated others as Jimmy Hood’s men treated the Mormons.

I briefly was friends Jed Smock, the infamous college campus preacher. Jed had a small church in Columbus, and he asked me to preach for him, which I did. I later observed Jed street preaching, and after doing so I concluded that I wanted nothing to do with him. Jed loved to call names and berate people. On several occasions, Jed got his ass kicked for calling college women whores. Jed and I may have shared a commonality of having been street preachers, but our methodology was very different. Jed’s approach was to attack and warn, whereas I took a friendlier approach, desiring to engage people in thoughtful discussion. Our end goal desire was the same: to evangelize the lost. Jed, along with his fire-breathing wife Cindy, continue to preach at numerous college campuses. Their shtick hasn’t changed. (The Smocks, by the way, believe in sinless perfection. That’s right, they don’t sin. According to them, they haven’t sinned in years.)

Sometimes, my street sermons led to conversations long after I was finished preaching. Let me conclude this post with a story I think readers will find entertaining.

One spring day, I was preaching on a street corner in downtown Zanesville with Polly and our children. Pulling up to the traffic light near my corner with his window down was a young man I knew from seeing him race dirt track cars at Midway Speedway in Crooksville, Ohio. I knew I had less than two minutes to preach to him, so I quickly tailored my message to the man, reminding him that race car drivers needed Jesus too, and hell awaited them if they did not repent of their sins and put their faith in Jesus Christ. The man had a shocked look on his face. How does that preacher “know” I am a race car driver? Several weeks later, I ran into him at a car show and he let me know that I had scared the living shit out if him. I chuckled a bit, and then I told him that I was a regular patron of Midway Speedway, and that I had seen him race many times. The man laughed, and then we spent a few minutes talking about racing. I am sure diehard street preachers will say that I should have pressed the man on his need of Christ, but I decided, instead, to be an ordinary, decent human being. By this time, my Calvinistic theology had affected my approach to street preaching and calmed some of the angst I had over humanity needing salvation.