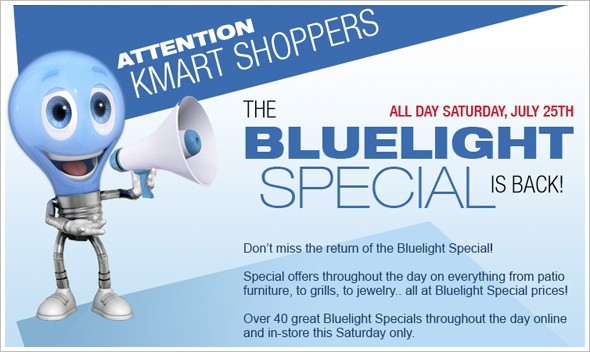 Older readers might remember shopping at the stores of discount retailer Kmart and seeing what was commonly called a “blue light special.” Blue light specials were sudden discounts offered to shoppers during their shopping experience at Kmart. A store employee would roll a cart with a police-like blue light attached to a pole near the aisle where the sudden discount was going to be offered. At the customer service desk, another employee would announce to shoppers, for example, “ATTENTION KMART SHOPPERS! There’s a blue light special going on right now on GE light bulbs in aisle three!” The employee in charge of the blue light would switch it on. and with its flashing/rotating light, the blue light would guide customers to their exciting just-for-them discount on light bulbs. Woo-hoo!

For eleven years in the 1980s and 1990s, I pastored the Somerset Baptist Church in Mt. Perry, Ohio. I started this church in 1983, and remained its pastor until I resigned and moved to San Antonio, Texas in 1994 to become the co-pastor of Community Baptist Church. For a few years, Somerset Baptist was the largest non-Catholic church in Perry County. The church was known for its fiery redheaded preacher and its International Harvester-colored red and creme buses that bused in church attendees from Muskingum, Perry, and Fairfield counties. Reaching high attendances in the low 200s, this country church reached thousands of people for Christ.

The church also attracted more than a few people who had — in my Baptist eyes, anyway — screwy beliefs. One such person was the mother of a woman who was a member of the church (along with her husband and two children). I had visited this woman and her husband several times at their home, hoping that they would join their daughter, son-in-law, and grandchildren in worshiping Jesus at the “fastest growing church in Perry County” — as the church’s sign said, anyway. I knew the woman had some charismatic tendencies, but I thought I could preach all that nonsense right out of her if she would only give me the opportunity to do so.

For those of you who are not aware of what charismatic beliefs are, let me describe them this way: all the miraculous spiritual gifts found in the Bible — healing, raising the dead, speaking in tongues, to name a few — are in force today. The favorite gift of charismatics is speaking in tongues — an unintelligible prayer language God gives to people who are filled/anointed/baptized with the Holy Ghost. As a Baptist, I believed that when a sinner was saved he received all of the Holy Ghost, and there was no more of Him to have. All Christians needed to do was utilize the power that was already within them. Charismatics tended to be an emotionally excitable lot, at least while worshiping Jesus. (I preached at several Charismatic/Pentecostal churches during my tenure at Somerset Baptist.) In their minds, babbling nonsense they believed was given to them by the Holy Ghost was a sign of God’s presence and power. Just turn on any of the dozens of national Christian TV channels and in short order you’ll see tongues-speaking on display.

The woman I mentioned above was a babbler, and this worried me a bit, but I thought that my Bible-saturated preaching would deliver her from charismaticism. Not only did this woman speak in tongues, she also believed that Jesus spoke to her, audibly. That’s right, this woman had conversations with a mythical entity she believed was the Jesus of the Bible.

As was our custom for many years, the church has a testimony time on Sunday evenings. This was time allotted for church members and visitors to stand up and share with everyone in attendance what Jesus had done for them over the past week. Sometimes, these brag-on-Jesus times turned into narcissistic, look-at-what-I-did-done-do for Jesus sessions. Often, testimony time was a time for congregants to lie about their relationship with God. One dear woman, who had been a smoker her entire adult life, stood up one Sunday and praised Jesus for delivering her from the filthy sin of smoking. We had a quite a praise-fest that night, thanking our Lord for delivering Sister R from her addiction. Years later, I learned that Sister R had, in fact, never stopped smoking, and that the only reason she said that she did was so she could have the appearance of a victorious Christian life like the rest of us. Oh, if she had only known that NONE of us, including her preacher, had victory over sin, she might not had felt compelled to lie. Sister R felt so guilty about not being as spirit-filled as the rest of us that she was willing to lie to her friends about her deliverance from smoking. Not long ago, Sister R died of cancer. I do hope that she found peace and rest. While her smoking most certainly contributed to her death, she had other qualities that deserved praise and admiration. Sister R was a kind, compassionate woman, but sadly, in the IFB church she attended, all that mattered was her sinful habit. As her dumb ass preacher used to say, smoking won’t send you to hell, but it sure will make you smell like you have been there! (Please read  Ken Ham, Answers in Genesis, Dinosaurs, and the SIN of Smoking)

On one particular Sunday night, the charismatic lady mentioned above decided to attend church with her daughter. She had visited several times before, and let it be known that she really liked my “old-fashioned” preaching. Prior to my sermon, I asked if anyone had a good word they wanted to put in for Jesus. Several people raised their hands, signifying that they wanted to brag a bit on their Lord and Savior. The charismatic woman excitedly raised her hand, anxious to let everyone know about a recent encounter she had with Jesus. When it came time for her to testify, she popped up  from her seat and said this (as recounted from thirty years ago):

I was asleep last night, and all of a sudden I awoke, feeling a “presence” in my bedroom.  As I stood to see this presence, my eyes saw a blinding blue light. Now, I knew that Satan could present himself as an angel of light, so I spoke to this light, saying, If that’s really you Jesus, please make yourself known to me. And right then and there I heard, Attention K-Mart Shoppers! (Okay, that last sentence was a bit of literary fiction, also known as preaching.)  And right then and there I heard a voice that said, it’s me, Jesus. Praise, the Lord. I knew then that the presence in my room was Jesus.

For those of you raised in the IFB churches, imagine my homicidal thoughts as this woman was regaling congregants with her version of a blue light special. I was oh-so-happy when she stopped testifying, and later let it be known among church members that her testimony was NOT an approved meeting with Jesus. We Baptists only talked to Jesus in English, and only while we were on our knees praying; and even then our talks with Jesus had to align with what the Bible said. In other words, ATTENTION CHURCH MEMBERS! There will NOT be any blue light specials at Somerset Baptist Church.