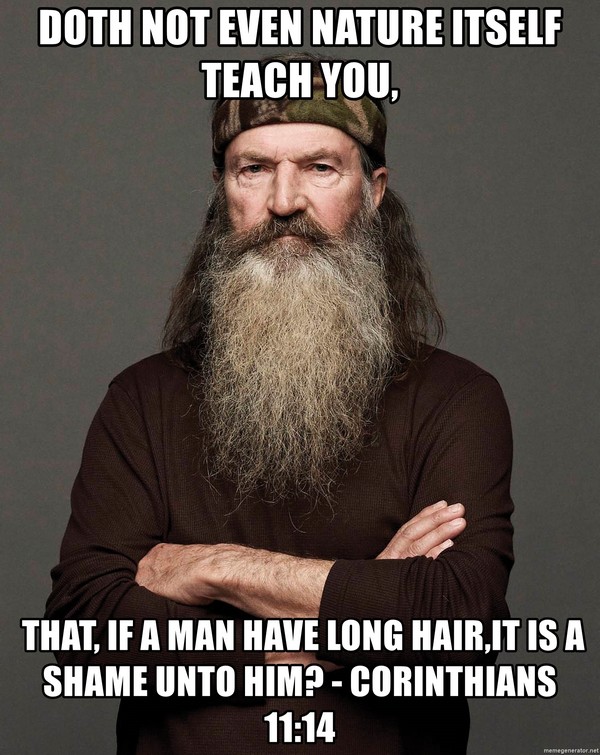 Warning! Snark and abuse of John Boy Piper ahead.

Well, men should not wear long hair. At least, the apostle Paul says so. Why? Because nature says it’s unnatural. But how does Paul arrive at such a conclusion? Isn’t nature the reason why men can grow long hair in the first place? Today’s question comes from the one and only Dr. Andy Naselli, who asks this.

“Hello, Pastor John! Paul argues from ‘nature’ in both Romans 1:26–27 and 1 Corinthians 11:14–15. In Romans, Paul argues that same-sex passions and intercourse are ‘contrary to nature’ because they fundamentally rebel against God’s created design for sex. In 1 Corinthians, Paul asserts that ‘nature’ teaches that long hair on men and short hair on women are dishonorable. How do you reconcile those two passages?

“Is Paul using the word ‘nature’ in the same way? Or is he using the same word in different senses? It’s problematic to see Paul using ‘nature’ in exactly the same way in both passages. If you say they are both only cultural, then that opens the door to same-sex passions and intercourse being okay in other cultures. But if you say that they are both based on God’s created design, then you have to say that long hair on men and short hair on women are always wrong in every culture without exception. And, as a friendly reminder, Jonathan Edwards had long hair!”

They exchanged the truth about God for a lie and worshiped and served the creature rather than the Creator, who is blessed forever! Amen. For this reason God gave them up to dishonorable passions. For their women exchanged natural relations for those that are contrary to nature [that’s the word Andy was referring to] and the men likewise gave up natural relations with women and were consumed with passion for one another, men committing shameless acts with men and receiving in themselves the due penalty for their error. (Romans 1:26–27)

Now, I think what Paul means by nature in this passage is who we are as male and female humans, designed by God with our built-in, God-designed natural differences — both physical, and more essentially, the deeper-than-physical, distinct realities of manhood and womanhood rooted in our God-designed male and female souls.

Now, that’s a long definition of nature, but you can pause and go back and listen to it rather than me repeating it here. The implications for Paul are that we should conform our sexual relations to what God has designed our natural bodies for and written on our natural male and female souls. Homosexual intercourse, Paul says, is contrary to this nature and so is shameful and dishonorable.

Now, here’s the text in 1 Corinthians 11 that Andy is specifically focusing on, dealing with how women may properly pray and prophesy in mixed gatherings in Corinth in the first century. Here’s what he says: “Judge for yourselves: is it proper” — prepōn in Greek: fitting, seemly. That’s an interesting ethical category for Paul. It’s very important. “Is it proper” — is it seemly, fitting — “for a wife [woman] to pray to God with her head uncovered? Does not nature [same word as in Romans 1:26] itself teach you that if a man wears long hair it is a disgrace for him, but if a woman has long hair, it is her glory? For her hair is given to her for a covering” (1 Corinthians 11:13–15).

So a women takes her hair, wraps it up, and puts it on her head for a covering. Now, the key statement is, “Does not nature itself teach you that if a man wears long hair, it is a disgrace for him?” (1 Corinthians 11:14).

Andy asks, “Is Paul using the word nature in the same way in these two texts? Or is he using the same word in different senses?”

Human males, left to nature, will have just as much hair on their heads as women, and more hair on their faces. If you think one way, you seem to get the opposite of what Paul’s saying. But Paul’s not stupid. He could feel his cheek — he’s not stupid.

If I walked into church five years ago, while I was still preaching, wearing a dress, high heels, stockings, long floppy earrings, and lipstick, the elders should hustle me off to a side room and with dismay say, “Pastor, doesn’t nature teach you not to wear a dress?”

They would be right. It does. It would be horrifically contrary to my maleness. Nature does teach me that. This is the very same nature that teaches me that having sex with a man is shameful. But this is not because kilts in Scotland are sinful or that long earrings on men in Papua New Guinea are sinful. This is because whatever culturally defined accompaniments of femininity are in a culture, a man’s nature as a male will find this proper — that Greek word prepōn, the opposite of unseemly, improper, shameful, and repulsive.

Here’s my summary. Did nature teach the Corinthians that if a man wears long hair, it is a disgrace for him? Yes, it did. Nature did because the God-designed, healthy male soul revolts against clothing himself in symbols of femininity, just like the God-designed, healthy female soul revolts against presenting herself as a man. That revolt from nature is a God-given teacher.

Jesus, John get to the @#$%#* point. If a man’s hair makes him look like a woman it is a sin. The same goes for women. If their hairstyles make them look like a man, they are breaking God’s law. Question? WHO decides what is feminine and what is masculine? John Boy and his fellow Fundamentalists do. Piper throws a bunch of “exegesis” and “interpretation” — also known as Baptist word salad — at the issue and concludes that what determines whether a particular male or female hairstyle is sinful is Fundamentalist definitions of feminine and masculine. As always, the answer remains, WE decide. And that’s how worldlings do it too, John Boy. WE decide, and we’ve decided you can take your Fundamentalist claptrap and shove it up your … you know that place you and your fellow anti-homosexual buddies spend way too much time sniffing around.

I am married to a beautiful, sexy, maturing woman. In October, my wife will turn sixty. When we married, Polly had short hair. Later in our married life — after I got a message straight from Jesus and his Holy Word — Polly let her hair grow out. Not that she wanted to, but she obediently — based on her husband’s straight from the mouth of God preaching and head of the home leadership — let her hair grow. We had two young daughters, and they too let their hair grow out. Both of them were out of high school before a beautician’s scissors ever touched their long red hair.

After my long hair on women phase went the way of all such words from the Lord, Polly got her hair cut a bit shorter every time she went to the beautician’s shop.  Soon, the length of her hair crept up from her waist to her shoulders. And once she was free of Jesus and the Bible? Why, she’s right back to wearing her hair as she did when a young, brash redheaded boy came up to her and asked out on a date forty-plus years ago.  Funny how that all works out, eh?