Everybody But the Church Understands 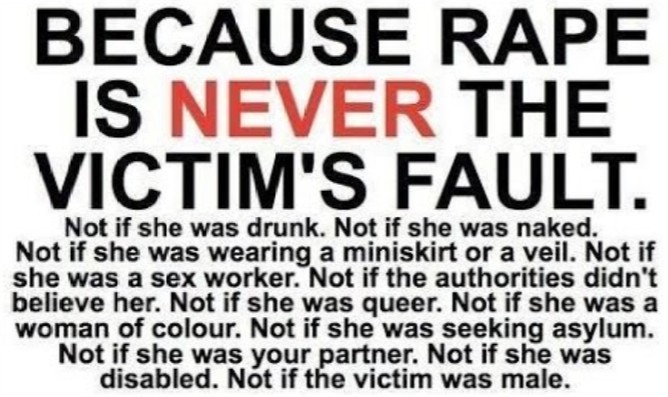 Not so long ago, rape was seen merely as a “sex crime.” I say “merely” because its “sexual” designation made it, at best, less worthy of attention or, worse, something the victim brought on herself. (Rape was also, for all intents and purposes, defined as something done to a woman by a man.) Thus, it could be seen as something that happened because a woman was out at the wrong time or wearing the wrong clothes — not a way in which one human being violated another.

But then a shift occurred. As someone who is not a criminologist or a scholar in any related field, I can’t tell you what caused the changed. What I know, however, is its result: policy makers and law enforcement officials are, increasingly, treating rape as a violent crime. While there are still police officers and departments, as well as public officials, who treat victims with condescension or even hostility, increasing numbers are doing what they can to give rape victims the same sort of attention and avenues of redress afforded people who have been mugged or suffered other random assaults — which, of course, is what they deserve.

Thankfully, I see a similar sort of change in the winds for people who have been sexually molested by priests or other authority figures, including employers, teachers and directors. One result is that more of us are coming forward, whether in the days or weeks after the incidents — or even decades later, as I finally did.

This is not to say, of course, that coming forward is easy or without repercussions: why do you think I’m writing under a nom de plume? But the fact that I, and others, have been able to speak up, in whatever ways and to whomever (I’ve told a few good friends as well as a therapist and social worker) shows that at least some people have a different, and more accurate, perception of sexual harassment, molestation, abuse and assault from the ones they had just a few years ago. And, of course, people who hadn’t been paying attention are now focused on the issue.

The change I see is this: people are starting to understand that when a priest takes advantage of an altar boy who doesn’t yet know the names of the parts of his body the priest is touching — or a director demands sex of an aspiring actress — or a coach or trainer forces him- or herself on an athlete whose life plans depend on staying on the team and keeping a scholarship — it’s no more a mere “sex crime” than the attack of a waitress on her way home from the lobster shift — a work shift that covers the late evening and early morning hours — or forced intimacy by a spouse, shift  partner or paramour. Instead, the abuses I’ve described are abuses of power imbalances — and, perhaps even more important, abuses of trust.

That last point cannot be overstated. People usually enter marriages trusting each other. Employees go to their jobs trusting that their supervisors or employers will treat them with personal and professional respect. And, every day, parents entrust their kids with — and teach their kids to trust — teachers and coaches.

And priests. In communities like the one in which I grew up, priests were trusted more than anybody else. That is one reason why abuse and molestation from them is so traumatic and alienating: The faith parents and other adults have, and teach their children to have, in their priests—whom they see as representatives of God — makes it difficult, if not impossible, for kids to speak up, even if they have the language to do so.

That implicit, unquestioned trust in priests makes abuse from them all the more egregious: violating that trust is worse than almost anything else that can be done to a vulnerable child — or, for that matter, to adults who lack the confidence to speak with other kinds of professionals. Very often, people like the ones with whom I grew up could confide in almost no one else, and they and their kids don’t have much else in their lives besides work, school, family and the church.

People are outraged over sexual abuse from priests, as well as other authority figures, because they’ve come to understand what I’ve described. My closest friend, the widow of a blue-collar worker, “gets it.” So does another friend who grew up without religion and says she never experienced abuse from anybody. So does a male friend who has practically no formal education.

Lots of other people get it, too. Sometimes it seems everybody does — except for Church officials. Rather than seeing sexual abuse by priests as an exploitation of trust and power, the church blames other things. Like the Sexual Revolution — never mind that victims have been reporting abuse they incurred decades before the SR supposedly corrupted us. Or homosexuality — forgetting that nearly all men (including priests) who sexually molest boys never have any sort of sexual experience with adult men, or any desire for it.

That last fact about the proclivities of pedophiles is something that I knew even before I had the language for it — or for my own body or desires, for that matter. I suspect most people these days understand as much, even if they’ve never read the research that corroborates it.

I understand. They understand. Everyone, it seems, understands — except for church officials — that priests preying on vulnerable young people is, more than anything, an abuse of trust. Perhaps it’s just not in their interest to understand. In the meantime, if not the sexual revolution or gays, they’ll find something or someone else — including the victims themselves — to blame.