Man’s Fall in the Garden of Eden: An Ancient Labor Relations Tale? 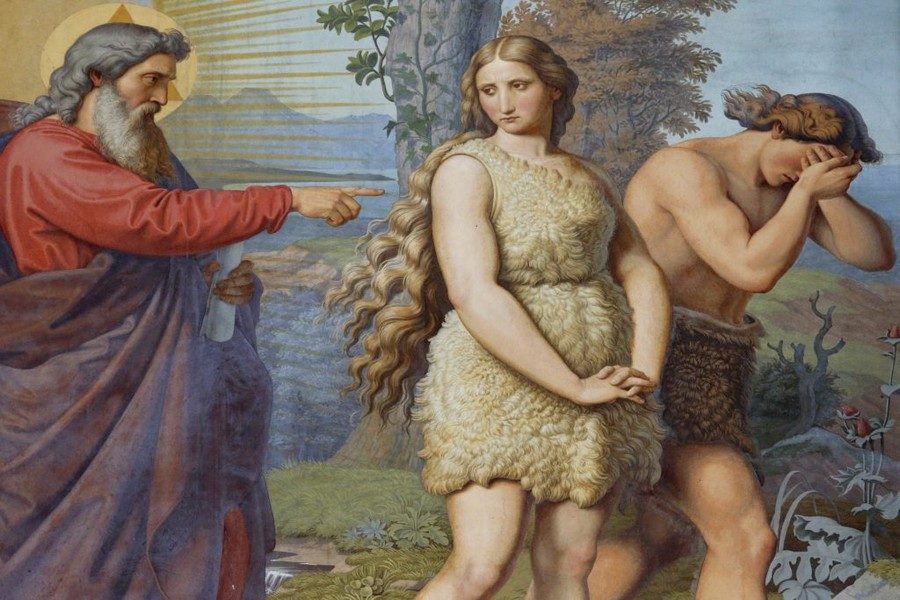 Sometime around 1800 B.C., an Akkadian stoneworker chiseled into rock a remarkable story.

It seems there were two ranks of gods, important gods who made all the decisions, and lesser gods who did all the work. One day, assigned to dig some canals, the hot and dirty and tired worker-gods decided to go on strike; “You are killing us,” they complained.

The impasse was broken by this proposal: the important gods would create a new creature to do the hard labor, man, but the leader of the strike had to be sacrificed. It was so agreed, and man was created from the dust, the water, and the blood of the sacrificed god.

But, as so often is the case, there was a fly in the ointment — the men were noisy at night, and the gods weren’t getting proper rest. After several warnings, the gods decided to get rid of men and sent a flood to drown them all. Only one man and his family survived, Atrahasis.

It’s easy to see in this tale the roots of two of the Old Testament’s best-known stories, the Creation and Fall, and Noah’s flood.

Now skip forward almost 4000 years to a story that is true, to the copper mines in Michigan’s Upper Peninsula. There, the mines employ thousands of laborers imported from all over the world; newspapers are published daily in more than a dozen different languages.

In June of 1913 the miners — who live in company-owned housing on company-owned property, buy their food at company-owned stores, and earn less than $2/day — call a wildcat strike. At Christmas they are still out, and on Christmas Eve they gather on the second floor of Italian Hall for a meager Christmas party for their children.

Soon after things get going, a strikebreaker enters the hall and shouts “Fire!” There is a panic, the door at the bottom of the stairs doesn’t open and there is a crush; seventy-three people, mostly women and children, die. The most widely-read local newspaper is owned by a mining company, and it becomes a tale of unruly foreigners impinging upon the prerogatives of a benevolent company. Nobody is ever prosecuted for the shout of “Fire!”

The story of the Italian Hall disaster shares a lot with the story of Atrahasis and the Fall. Instead of gods, there are mining companies and bosses; the men are imported, not created, to labor; there is disobedience — striving to live and enjoy life; there is even a serpent, the strikebreaker who shouted “Fire!”

And in all three stories there is cruel punishment without appeal.

I estimate the odds of a Bronze Age storyteller making up something that has so much in common with a labor relations disaster four millennia later as … zero. Atrahasis, and the story of the Fall, are undoubtedly allegorical blame-the-victim accounts of prehistoric misfortunes similar to the real-life Italian Hall disaster. They should not be read as literally true, but they are true in the narrow sense that they are accounts of the ancient human conflict between the powerful and the powerless.

Notice this, too: In all three stories, men threaten the power of the gods/bosses. In Genesis, this is made explicit (Gen 3:22-23, KJV): “And the Lord God said, Behold, the man is become as one of us, to know good and evil: and now, lest he put forth his hand, and take also of the tree of life, and eat, and live for ever: Therefore the Lord God sent him forth from the garden of Eden, to till the ground from whence he was taken.”

“… the man is become as one of us …” He threatens us, challenges us, cannot be trusted to quietly and submissively do as he is told. He must go.

I’m sure it has an odd sound to many, but I read Genesis’ tale of the Fall as an ancient labor relations tale. And with Augustine’s invention of Original Sin, Christianity put itself on the side of the bosses, the Establishment’s demand for unconditional obedience — where it has been ever since.