Charisma News Spins a Story to “Prove” a Miracle 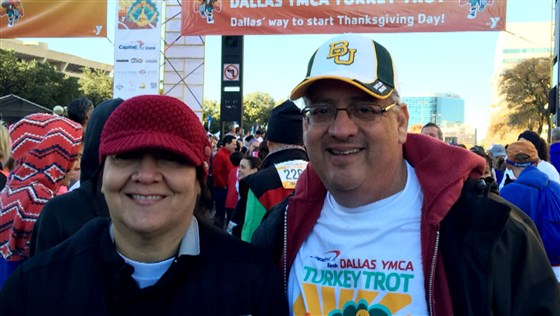 Charisma News, the go-to source for charismatic excess (and outright lunacy) within Evangelicalism, recently published a story pimping the Christian fantasy show, Godwinks @ PureFlix.  “Godwinks” are, according to Charisma News, miracles performed by the Christian deity. One such “Godwink” involves Toni and David Espinoza of McAllen, Texas:

Rushnell [the host of Godwinks], who tells many of these “godwinks” stories in PureFlix.com’s series “Godwinks at Pure Flix,” recently revealed the most amazing miracle story he’s ever encountered.

He told “The Pure Flix Podcast” about how Toni and David Espinoza of McAllen, Texas, were once given some truly devastating news: David, who was 50 years old at the time, suffered from a heart that was working at just 10 percent capacity, and he desperately needed a transplant.

The family turned to pray—and then something absolutely incredible happened. Listen to “The Pure Flix Podcast” at the 6-minute mark to hear Rushnell explain:

Toni soon found herself feeling convicted because she realized she was essentially praying for someone else to die in order for her husband to receive a new heart.

That’s when she totally changed her mindset and made a major adjustment to her prayer routine: She asked God to fully heal her husband.

“She had prayed that God would completely heal David [and] that he would confirm it by making it snow on McAllen, Texas, on Christmas Day,” Rushnell said.

There was only one logistical problem with Toni’s belief that God would confirm the healing with a snowfall on Christmas: it had reportedly never snowed on Christmas in McAllen, Texas. In fact, there hadn’t been snow in the area in 109 years.

But, on Christmas Eve at 11:45 p.m., Toni looked outside and saw a white coating in her backyard: it had snowed for the first time in McAllen, Texas. While some might call it a coincidence, David went back for a heart appointment three weeks later, and his physicians were stunned.

“The doctors looked at the reports, they shook their heads and said, ‘We can’t explain this, but David—you are going to live for a very long time,” Rushnell said. “It was the most amazing godwink that I think I had ever heard.”

Yes, it did snow on December 24-25 2004. However, not only did it snow in McAllen, it snowed across much of Southern Texas. According to Wikipedia:

The most noticeable, and unusual, event associated with the storm was the snowfall it produced. Much of the snow fell in southern Texas, along the coast of the Gulf of Mexico, but some snow, albeit less deep, fell across southwestern and southeastern Louisiana. Any snowfall in these areas is extremely unusual, perhaps occurring once every twenty years, and these events are usually airborne flurries which melt on contact with the ground. In many places the snow stuck to the ground and accumulated to an appreciable depth. In Brownsville, Texas, snow fell to a depth of 1.5 inches (3.8 cm), the first measurable snowfall at the city in years, since the Great Blizzard of 1899.The fact that the snow accumulated overnight on Christmas Eve led to a White Christmas the next morning, something completely foreign to the region. Across all of southern Texas and in southwestern Louisiana, snow fell in places where it had not for anywhere from 15 to 120 years. Near the coast, in Corpus Christi, Texas, 5.2 inches (13 cm) of snow fell, more snow than in all previous recorded years combined. This was also the case in Victoria, Texas, where a significant 13.0 inches (33 cm) fell. New Orleans, Louisiana had its first white Christmas in 50 years. In addition to the unusual occurrence of snow inland, moderate to heavy snow was also reported over the open waters of the Gulf of Mexico. This is the first significant snow fall in Houston since February 12, 1960, when a snowstorm hit central and south Texas with eight to 10 inches of snow

This was a WEATHER event, not a “Godwink.” Science, people, science. It snowed in McAllen, Texas because atmospheric conditions were such that it snowed — no deity needed. As with most Bible-blinded Evangelicals, Toni and David Espinoza saw a miracle where there was none.

December 8, 2017, The McAllen Monitor reported yet another “blizzard,” one that left so little snowfall that weather officials could not measure it. Yes, it technically “snowed,” but here in the upper Midwest, such snowfalls don’t count. Yet, using Toni Espinoza’s logic, a McAllen resident somewhere could have claimed it as a “miracle”; that is if they had demanded God to whip out his divine penis and show it just for them on December 8, 2017.

According to the Charisma News story, it hadn’t snowed in McAllen, Texas in 109 years. I searched high and low for evidence for this claim, and all I found was the following on the National Weather Service website. It tells the WHY of the 2004 snow event:

The Rio Grande Valley of Deep South Texas experienced one of its most memorable Christmas Holidays ever. A rare combination of weather events developed in late December that produced several inches of snowfall, which in itself is quite rare in this region. However, to have snow fall on Christmas Eve and morning is a historical first according to the more than 150 years of weather data. This White Christmas is certainly one for the record books.

The freezing temperatures and snowfall were expected in South Texas and National Weather Service Offices were talking about the arrival of unseasonably cold temperatures prior to the holiday. Snowfall was mentioned as a possibility and as Christmas drew closer, snowfall became more likely as the weather forecast became more focused.

We need to look back to the week before Christmas in order to recap the details of this historic event. Signals from the numerical weather forecast models suggested a strong cold front and arctic air mass would move southward along the Rocky Mountains into Texas and eventually over the Lower Texas Coast. This cold front moved through Brownsville, Wednesday afternoon (12/22/2004). A second reinforcing surge of arctic air followed the initial front, dropping temperatures into the 30s and low 40s late Thursday (12/23/2004). Maximum temperatures on Friday (12/24/2004) were in the upper 30s to low 40s across the Rio Grande Valley. Widespread moderate rain covered much of the area with most locations reporting one half of an inch to nearly one inch of liquid precipitation (Figure 1, below). The cold rain began to taper off on Christmas Eve as temperatures began to fall below freezing

As the event began to unfold, the meteorologists at NWS Brownsville refined the precipitation forecast to account for rainfall changing to sleet or a rain/snow mix, and eventually changing to all snow for the overnight hours between December 24th and 25th. The first in a series of winter weather warnings and advisories – Freeze Warnings – were issued by the National Weather Service at 230 AM December 23rd. Around noon on Christmas Eve, the Freeze Warnings were upgraded to Winter Weather Advisories, which were subsequently upgraded to Winter Storm Warnings later that evening for Heavy Snow, continuing until the morning of December 25th when the snowfall finally ended.

All in all, the snowfall was greeted with joy and excitement since it has been almost 110 years since the last measurable snow fell in the city of Brownsville – and for that matter, much of the Valley.

Yes, snowfall in McAllen is a rare occurrence. Yes, it snowed on Christmas Day 2004. Yes, it has snowed since then, though not in measurable amounts. Thus, the best that can be said is that there had not been MEASURABLE snowfall amounts in McAllen in 109 years, and that this is due to climate and weather patterns, not God. I am confident in saying that there have likely been other “snowfalls” to hit McAllen besides the “blizzard” of 2017. Meteorological records only go back for 150 or so years, so it is an argument from silence to say that it has never snowed in McAllen before 2004. This story is just another example of Evangelicals desperately looking for a miracle where there is none. And as far as David Espinoza’s miraculous healing is concerned, neither Charisma News, God Winks @Pure Flix, or the Espinozas provided any evidence for the claim that David was miraculously “healed.”  People are just expected to, by irrational faith, BELIEVE. When asked on the TODAY show about whether the chain of events was mere coincidence or divine intervention, God Winks host, Squire Rushnell, replied “You know what that shows? It shows that if you have faith and pray, Godwinks happen.” What it shows is that with faith people can and will believe almost anything. If Evangelicals want rationalists and skeptics to “believe,” they are going to have to cough up a lot more evidence than the aforementioned story.