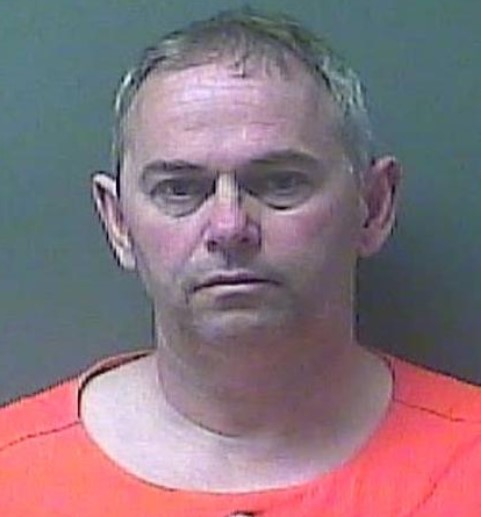 Without fail, it seems, pastors can be found putting in a good word for parishioners convicted of sex crimes. Why is it pastors feel a need to speak on behalf on sexual predators? God forgives and forgets, these pastors might say, and so should we. To that I say, bullshit. The only person who is in the position to forgive is the victim. We as a society must hold such people accountable, not only legally, but in the court of public opinion. There are some crimes that are so heinous that there can be no redemption. Punishment is in order, end of story.  Such is the case of Michigan City police officer Thomas Jackson.

Today, a tearful Jackson was sentenced to 36 years in prison for repeatedly raping an intellectually disabled woman. The Michigan City News-Dispatch reports:

During that trial, he was acquitted of one count of rape, and the jury hung on the remaining three counts.

A new jury in his second trial delivered guilty verdicts on all three remaining counts in December.

“I wish I could go back and undo everything, and I pray, one day, that (the victim and her family) do forgive me,” Jackson cried from the defense table Friday. “ . . . I’m so sorry and I’m so ashamed of what happened.”

According to the probable cause document in the case, the victim possesses the emotional and mental capacities of a child between the ages of 10 and 12.

Jackson’s lawyer called on several people to put in a good word for his client. While the News-Dispatch story does not give the exact words spoken by Jackson’s pastor, it did say:

The defense called multiple witnesses to testify on Jackson’s behalf, including his former pastor, a childhood friend and the field officer who handled Jackson’s case when he was on pretrial probation. All three talked of what they perceived to be Jackson’s high moral character or spirituality.

High moral character or spirituality? Really? I know we live in a Trumpian world now, where everything is turned upside down, but surely rational people would say that repeatedly raping an intellectually disabled woman and high moral character/spirituality are incompatible. Someone with high moral character does not rape a child. Jackson, by his actions, showed he is anything but moral or spiritual. And from my seat in the atheist pew, there is nothing Jackson can do in this life to redeem himself. Perhaps, Jackson loved puppies and was nice to his kids. He might have been a wonderful police officer. None of those things matters. His crime was such that any goodness in his life was obliterated by his vile actions. Wouldn’t it be nice if just once a pastor at a sentencing hearing stood before the court and said, “this man is a vile miscreant who deserves everything he gets, and if I had my way he would be locked up until he dies”? Why is it that so-called men of God can never rise to the occasion? Does their theology stand in the way; the necessity of forgiving all who sin? Perhaps they fear causing harm to the perpetrator’s family. Fine, then say nothing. Surely that is a better path than choosing to paint a sexual predator as a moral/spiritual man who happened to take a wrong turn.

The repeated rape of [the victim] on the whim of the defendant over the course of several years is hard to fathom and evidence of a depraved mind.

Notwithstanding his position as a Michigan City Police officer, as a human being, the defendant had a duty to protect a person with obvious cognitive disabilities who had been entrusted to his care, custody and control. In doing so, the defendant transgressed a boundary of sickening proportions.

For further context on this story, please read this South Bend Tribune story from September 2018. The woman’s parents, in my opinion, showed a lack of awareness and discretion in allowing their daughter to have a relationship with the married Jackson.