Ruminations in Punctuality: Why I Am Early For Everything

Ask anyone who knows me and they will tell you that I am early for everything. It is not uncommon for me to arrive thirty minutes to an hour before an event begins. When I attend major league sporting events and dirt track races, I arrive a half hour or so before the gates open. The same can be said for medical appointments and dinner reservations. The surest way to irate me is for someone to say he or she will be somewhere at a certain time, and then to show up late, leaving me oh-so-impatiently waiting. When someone makes me wait for no good reason (and doesn’t text or call), that person is being rude and wasting my time; time that could be used to do other things. I am acquainted with people who have no problem making other people wait for them to make their grand entrance minutes or even hours after the appointed time. Such people think that setting a time for an event, meal, or get-together is a suggestion, one they need not follow if more “important” stuff claims their attention. They seem clueless to the fact that their lack of punctuality robs others of their time; that ultimately it shows a lack of respect. “Bruce, you don’t understand; shit happens.” Yes, shit does indeed happen to ALL of us, but many of us still meet our obligations on time. Why is that?

One of the reasons I am punctual — “punctual” meaning well before an event begins — is because I don’t like crowds and I don’t like being the focus of attention. I know that sounds odd coming from a man who spent most of his adult life being the center of attention as a pastor, but Polly will tell you that I go out of my way to avoid people/crowds, preferring to blend into the background. This is especially the case when I go somewhere I haven’t been before. I want to arrive early so I can survey the lay of the land. The same applies to going to a restaurant to eat. I prefer, if at all possible, to sit where I can clearly view my surroundings. I prefer a seat where no one can walk behind of me. That’s just how I am. My children know not to invite me to crowded public events. Take concerts — I might love a particular band, but if entrance to the event is general admission, count me out. Years ago, my sons took Polly and me to hear Collective Soul at Pierre’s in Fort Wayne. We had a wonderful time; that is until it was time to leave. I was surrounded by younger adults who had spent most of the evening swilling beer. They pushed, shoved, and repeatedly banged into me. The last straw was one man who dumped beer on me. With one hand, I stiffed-armed the man, sending him reeling. My sons decided it was best to quickly get Dad out of the place before he killed someone. And then there is Christmas shopping. We used to go to local retail stores and shop, but I found myself being repeatedly battered by people whose only mission in life was to save $2 on a toaster. After an hour or so of that, I was ready to commit homicide with my cane. No thanks. We now do all our shopping online.

Another reason I am punctual goes back to the days when Polly and I were first married — over forty years ago. We drove junk cars — cars I purchased for a few hundred dollars. We went through dozens of cars the first two decades of marriage. My oldest two children still “fondly” remember me picking them at the Christian school in the dilapidated, noisy, green full-sized Ford station wagon pictured above. 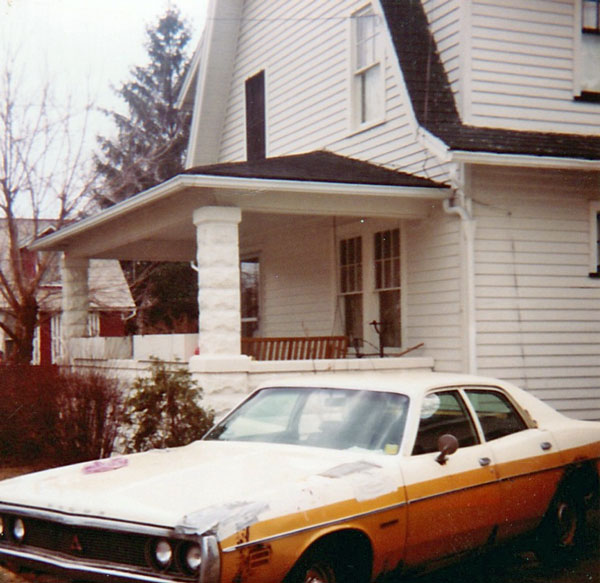 Here’s another beauty I bought in 1980 for $225. It was formerly a fleet vehicle owned by the Newark Telephone Company. If you carefully look at the driver’s side fender, you will notice the fancy body work I did with duct tape. I drove it to work in Columbus for two years before selling it to a man in our church. I gave him instructions on how to baby the car along. He didn’t listen to me, and two weeks later he trashed the transmission. “Idiot,” I thought at the time. Ah, those were the days.

These clunkers and others rarely had good tires on them. I drove on tires years ago that had cords showing through their tread. Today, I wouldn’t leave my driveway with such tires. Of course, driving cars with bald ties meant sitting alongside countless roads with flat tires. Back then, I usually carried two spare tires, just in case one of them didn’t stay inflated. Changing a flat took time, so I began adding time to whatever trip I was taking to account for having to change a tire. Generally, I added thirty minutes or so to the drive time. Remember, I hated being late; and being on time was the same as being late. Allowing time for changing a tire was the best way for me to arrive on time. As the years passed, I started buying nicer cars, finding out that they did come with decent tire tread. Why, I even found out that there were stores that sold NEW tires. (I used to buy used tires for $5 apiece from a guy who attended our church. For a few years, I went the retreaded tires route.)

These days, I am far removed from junk cars and flat tires. But what still remains is the time with which I pad trips, just in case something happens that delays me. You never know, right?