If Jesus’ Mother Had a Paternity Test, What Would it Say? 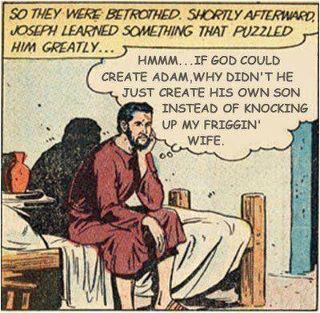 According to Evangelicals, Mary, the mother of Jesus, was impregnated by the Holy Ghost and nine months later gave birth to a God-man named Jesus Christ. In any other setting, believing such things would, at the very least, result in you being labeled a nutjob. But because it’s a religious belief, everyone is supposed to accept it without question. Or, at the very least, not criticize or ridicule said belief.

And in the sixth month the angel Gabriel was sent from God unto a city of Galilee, named Nazareth, To a virgin espoused to a man whose name was Joseph, of the house of David; and the virgin’s name was Mary. And the angel came in unto her, and said, Hail, thou that art highly favoured, the Lord is with thee: blessed art thou among women. And when she saw him, she was troubled at his saying, and cast in her mind what manner of salutation this should be. And the angel said unto her, Fear not, Mary: for thou hast found favour with God. And, behold, thou shalt conceive in thy womb, and bring forth a son, and shalt call his name Jesus. He shall be great, and shall be called the Son of the Highest: and the Lord God shall give unto him the throne of his father David: And he shall reign over the house of Jacob for ever; and of his kingdom there shall be no end. Then said Mary unto the angel, How shall this be, seeing I know not a man? And the angel answered and said unto her, The Holy Ghost shall come upon thee, and the power of the Highest shall overshadow thee: therefore also that holy thing which shall be born of thee shall be called the Son of God. (Luke 1:26-35)

Now the birth of Jesus Christ was on this wise: When as his mother Mary was espoused to Joseph, before they came together, she was found with child of the Holy Ghost. Then Joseph her husband, being a just man, and not willing to make her a public example, was minded to put her away privily. But while he thought on these things, behold, the angel of the Lord appeared unto him in a dream, saying, Joseph, thou son of David, fear not to take unto thee Mary thy wife: for that which is conceived in her is of the Holy Ghost. And she shall bring forth a son, and thou shalt call his name Jesus: for he shall save his people from their sins. Now all this was done, that it might be fulfilled which was spoken of the Lord by the prophet, saying, Behold, a virgin shall be with child, and shall bring forth a son, and they shall call his name Emmanuel, which being interpreted is, God with us. Then Joseph being raised from sleep did as the angel of the Lord had bidden him, and took unto him his wife: And knew her not till she had brought forth her firstborn son: and he called his name Jesus. (Matthew 1:19-25)

According to the Bible, Mary was engaged to a man by the name of Joseph. Prior to their marriage, Mary found out that she was pregnant. If we take the Bible at face value, Joseph hadn’t had sex with Mary. Wanting to make an honest woman out of Mary, Joseph married her. If he had not done so, Mary could have been stoned for committing adultery.

The aforementioned texts mention one of the most absurd things in the Bible: a virgin having a child. Human birth requires a fertilized egg, and the fertilization process requires sperm from a man. No sperm, no Jesus. Yet, Evangelicals ask us to suspend reason and believe that Mary was in some way impregnated by a non-human — the third part of the Trinity, the Holy Ghost. Wouldn’t this make for an awesome story on the SyFy Channel? Woman Becomes Pregnant Without Having Sex! There is no evidence for this claim outside of the Bible. We are expected to believe that Mary, a virgin, became pregnant through some sort conjugal union between her and the Spirit of God. How did this happen? Was Mary a willing participant? If not, does this mean the Holy Ghost raped Mary?

Of course, when you believe your God works miracles, anything is possible. Nothing is too hard for God, including inseminating a young virgin without the benefit of male sperm and DNA. Anyone with a modicum of scientific understanding knows Jesus’ birth story is preposterous. The logical explanation is that Mary had sex with a man and became pregnant. That’s how it has worked from Day One. Either Joseph was Jesus’ biological father or some other man was. It’s either that or you believe God had sex with Mary and impregnated her.

Imagine if Mary asked for a paternity test. What would the test say? Who would it name as the father of Jesus? Joseph? Or maybe Bob? One thing is for certain, the test would not list the Holy Ghost as Jesus’ father.

This story, along with numerous others, was partially instrumental in my defection from Christianity. Either I believe what science tells me about where babies come from, or I suspend all reason, skepticism, and intellectual inquiry and believe God is the lime, Mary is the coconut, and when shaken, out comes Jesus. I’m sorry, but I simply cannot and will not believe such nonsense.