“It Must be a Miserable Thing to be an Atheist,” Says an Evangelical Christian 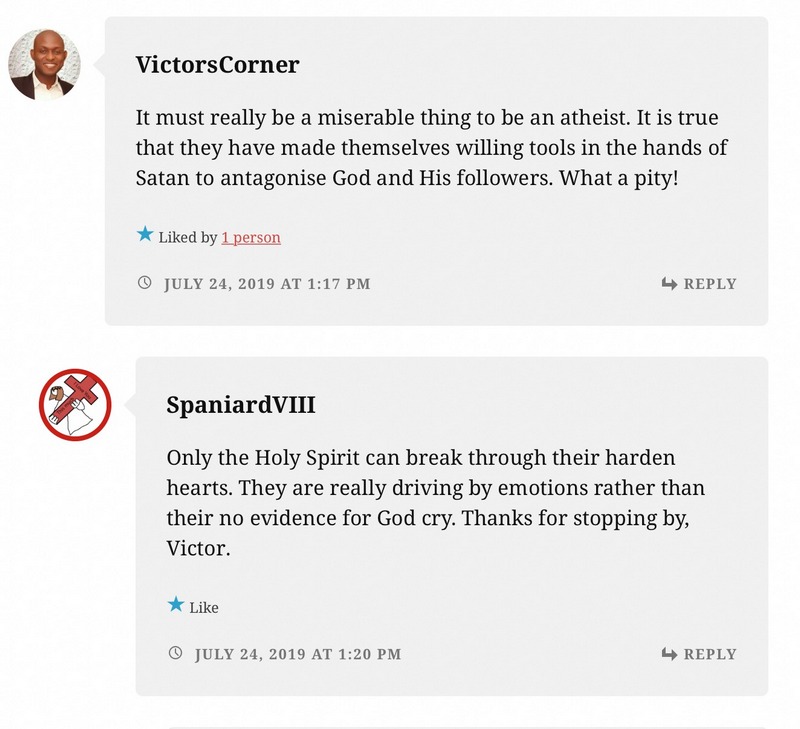 Recently, a Christian Fundamentalist man who hides behind the SpaniardVIII moniker wrote his latest post in a series on atheism. (I responded, writing a post titled Do Atheists Really Love to Wallow in Sin?) One of SpaniardVIII’s readers, Victor, commented:

It must really be a miserable thing to be an atheist. It is true that they have made themselves willing tools in the hands of Satan to antagonise God and His followers. What a pity!

So much wrong in three little sentences. How is it possible that atheists have made themselves “willing tools in the hands of Satan?” Atheists don’t believe in the existence of deities or devils — Satan included. Making ourselves such would be akin to standing in the yard next to a shovel and asking it to make us spades. Silly, right? So is the suggestion that atheists have made themselves tools in the hands of Satan. Have Victor or SpaniardVIII ever seen Satan? Of course not. He is little more than a fairytale character used by Evangelicals in their attempts to scare people. Watch out Christians! Satan-filled atheists wander to and fro seeking whom they may devour. (1 Peter 5:8) Watch out Christians. Satan-filled atheists present themselves as angels of light, but they are, in fact, wicked, vile, evil people. (2 Corinthians 11:13-15) Why, did you know atheists pickle fetuses and eat them once a year on Halloween; that atheists secretly desire to molest children; that atheists are reprobates, and you know what that means, they are p-e-r-v-e-r-t-s. (Romans 1) And so it goes. Shameless Christians, forgetting the Good Book condemns bearing false witness (Romans 13:9), lie about atheists and defame their character.

Why do Evangelicals act this way towards atheists? The short answer is that for Evangelicalism to have value, there must a clear distinction between good and evil; Christian and atheist. Evangelicals present themselves as pillars of moral virtue — that is until they are caught with their pants down, and then they are just like the rest of us, they say — so it necessary for atheists and other non-believers to be portrayed as people lacking morally and ethically. The Christian life is presented as the most awesome experience ever — all praise be to J-E-S-U-S — so it is necessary for atheists and other non-believers to be portrayed as having empty lives lacking meaning, purpose, and direction. Thus, to Victor and his sidekick SpaniardVIII, atheists are miserable people. I assume the focus of the word miserable is on how atheists live their lives; or how Evangelical zealots THINK atheists live their lives, anyway.

I hate to break it to Victor, but I have lived on both sides of the fence. I knew plenty of miserable Christians. I witnessed countless followers of Jesus living miserable lives, either by choice or due to the circumstances of life. I see nothing in Christianity that inculcates people from misery. Perhaps what Victor means is that compared to the life he has with Jesus, atheists have miserable lives. How can he know that? By what standard does he determine someone is miserable or is living a worthless life?

I am sure Victor, as an Evangelical Christian, measures the lives of others — especially atheists — according to his peculiar interpretation of the Protestant Christian Bible. Throw in a large dose of projection, and it is easy to see how Victor comes to the conclusion atheists are miserable. When Jesus is your end-all, it’s no wonder non-Christians are viewed as being lacking in some way or the other. Atheists, in particular, aren’t shy about telling Victor and other zealots like him that their beliefs are rooted in fantasy; that the Jesus they love, adore, and worship, lies dead somewhere on a Judean hillside; that the only thing awaiting Christians after death is darkness, silence, and decay. Is it no wonder, then, that the Victors of the world view atheists the way they do? 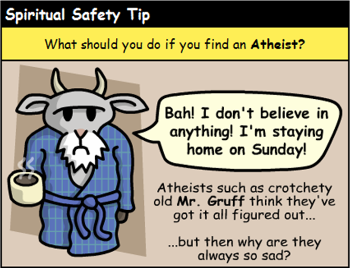 Here’s the problem with Victor’s Bible-blurred view of atheists. We are not, in general, miserable or unhappy. We daily strive to live happy, fulfilled lives, knowing that this life is the only one we have. Sure, we have problems, just like Christians do. We have days when we are asses and other days when we are saints (as in Saint Hitchens, Saint Gupton, Saint Hawking). Often, our lives are admixtures of good, bad, and indifferent deeds. We are, above all else, human. What atheists know that Evangelicals seemingly don’t, is that we are not “better” (or worse) than anyone else. We are, in every way, fellow travelers on the road of life, each of us walking the path set before us.

Victor pities atheists, not because of shared humanity, but because they don’t believe as he does. For Victor, life starts and ends with Jesus and the Bible. If anyone deserves pity, it is him. He has chosen a life of paucity, a life reduced to endlessly masturbating before the throne of Jesus; a life reduced to worshipping a mythical deity; a life where only one book matters, the Bible. Why would anyone in his or her right mind what to live this way? Remove threats of judgments and Hell and promises of Heaven and eternal bliss, and I guarantee you Victor’s life would be very different.

As long as fear and judgment are motivators, the Victors of the world will continue to say atheists are miserable. Instead of looking in the mirror and seeing their own misery, Christian zealots jump up and down, holler, and point at atheists, saying LOOK AT HOW MISERABLE THEY ARE! Classic misdirection. I hate to break it to Victor, but with or without Jesus, misery can and does come our way. Live long enough, and Mr. Misery and Ms. Heartache are going to make an appearance in your life. It’s not a matter of if, but when. Should atheists say to the Christian man dying from cancer, “it must be a miserable thing to be a Christian, to have given your whole life to a lie and now you are dying!” The atheists I know would never be so heartless, cruel, and indifferent. Yet, Victor thinks it’s okay — not knowing anything about the people he condemns — to say to atheists, such miserable people you are.

This post leaves me wondering what is it in Evangelical Christianity that causes followers of Jesus to lose all connection with their fellow humans? There will come a day when I will draw my last breath. I can only imagine how Evangelical pastors and bloggers will respond upon hearing of the Evangelical-pastor-turned-atheist Bruce Gerencser’s death. Look at how Christopher Hitchens and Steven Hawking were savaged after their deaths. Not long ago, Rachel Held Evans, a devout Christian, suddenly died at age 37. Her death was viewed by some within the Evangelical community as being some sort of divine retribution from the Evangelical God for Evans’ supposed heresy: Evans decapitated, her head placed on a pike for all to see, a reminder of what happens to those who stray from the narrow confines of the Evangelical box. Why can’t Evangelicals just act like decent, thoughtful human beings, even towards those who believe differently from them? See misery in the lives of others? Embrace their pain and lift them up, even if they worship your God, a different God, or no God at all. Surely, the fleshly, frail bond we have with one another transcends our tribes and teams, no? It should, but unfortunately, the Victors of the world refuse to remove their Bible-glasses long enough to see themselves and their fellow primates as they are.