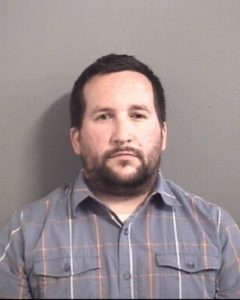 Earlier this year, Daniel Heath, the associate pastor of First Baptist Church — affiliated with the Cooperative Baptist Fellowship — in Wilson, North Carolina, was charged with first-degree sexual exploitation of a minor and coercion and enticement of a minor. The Wilson Times reported at the time (behind paywall):

A Wilson pastor and a volunteer youth baseball coach accused of sexual exploitation of a minor now faces a federal charge in connection to the case.

A Texas grand jury indicted 33-year-old Daniel Franklin Heath on one count of coercion and enticement of a minor, according to a unsealed federal indictment obtained by The Wilson Times. That indictment was handed down Wednesday. Heath, a former associate pastor of First Baptist Church in Wilson, was arrested a day earlier on the charge of first-degree sexual exploitation of a minor.

According to the Texas federal indictment, Heath used an LG model cellphone to “persuade, induce, entice and coerce,” a minor to “engage in sexually explicit conduct for the purpose of creating a visual depiction of such conduct, knowing that such depiction would transmitted in interstate and foreign commerce.”

Federal authorities say activity occurred from December of 2017 until April 11 of this year, according to the indictment out of the U.S. District Court for the Eastern District of Texas Sherman Division. Heath could face 10 years to life in prison if convicted on the federal charge.

Heath’s arrest warrant in Wilson alleges that he did “encourage” a 16-year-old girl to “engage in sexual activity, perform sexual activities to herself for the purpose of producing material containing a visual representation depicting this activity, the defendant knowing the character and content of the performance and material.”

Church members were also seated inside the courtroom Friday.

Heath is currently being held on a $500,000 secured bond in the Wilson County Detention Center.

The Federal Bureau of Investigation contacted the Wilson Police Department in April regarding Heath, who was the subject of an ongoing investigation, officials have said.

On Tuesday, the police department’s FBI Task Force detective assisted FBI agents in executing a search warrant at Heath’s home in Wilson, according to officials. Based upon evidence gathered at the scene, authorities arrested and charged Heath on that same day.

Several weeks ago, Heath pleaded guilty to enticing and coercing a minor to engage in illegal sexual activity.

Heath, who stepped down in May after 10 years on staff at First Baptist Church in Wilson, North Carolina, admitted to a federal court in Texas that he knew the unnamed minor was under 18 and living with her parents in Texas when he asked her to take photos and videos of herself engaging in sexually explicit conduct on her cellular phone and send the images to him.

Heath, 33, admitted his communications with the victim were romantic in nature, with both parties declaring themselves to be “in love.” Prosecutors said Heath required the girl to “submit” to him in matters including what to wear and to obtain his consent before touching her own body, but he did not agree with that part of a statement of stipulated facts.

According to the Wilson Times, the sentencing phase of Heath’s case is expected within the next few months. He could face from 10 years to life in prison.

Authorities say a third party introduced Heath to the victim through an Internet-based social media application in or about December 2017.

The two remained in “almost constant contact” until this April, court documents said, including his traveling to Texas to visit her in February.