Some Dogs, Cats, and Hamsters Go to Heaven After They Die 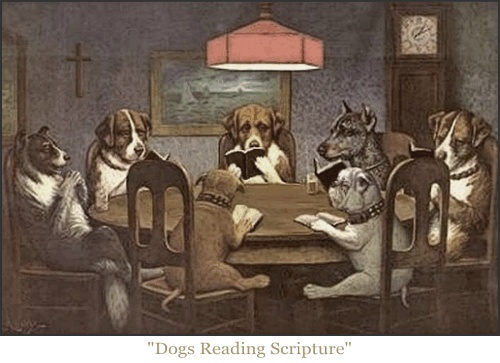 I am sixty-two years old. I spent fifty years in the Christian church. I pastored Evangelical churches in Ohio, Texas, and Michigan for twenty-five years. I have spent the last decade writing about Evangelicalism. You would think, by now, that there is nothing Evangelicals could say or do that I have not heard or seen before. Surely, Solomon was right when he said, “there’s nothing new under the sun.” Well, Solly boy, you are wrong.

Recently, Evangelical author and preacher Randy Alcorn decided to answer a question about animals in Heaven. Evidently, more than a few Evangelicals are stressed out over whether Rover or Fido will go to God’s Heavenly Trump Hotel® when they die. Here’s what Alcorn had to say:

Look at Genesis 1 and 2, and the highlight of all creation built up to is people. But right before people came animals. Those living beings, the first living beings that God made, animals. And it’s magnificent and wondrous that the first responsibility God gave to human beings along with to be fruitful and multiply and fill the Earth was to manage and care for animals. Adam named the animals. With the Flood, God makes a covenant not only with people but with animals. This is stated again and again in Genesis 6 through 9 and the Flood account. What we find in Isaiah 65 is the wolf and the lamb—and he specifically calls this the New Earth, so this is not just the Millennium. This is the New Earth. In verse 25 of Isaiah 65, ‘the wolf and the lamb shall graze together, the lion will eat straw like the ox,’ and then in Isaiah 11, it’s got leopard, goat, calf, cow, bear, ox, lion, cobra. When God remakes the earth, why would he not remake it with animals? Well, we know He will for sure because of these passages that have animals on the new earth, but also because Romans 8 says the entire creation has fallen. Creation fell on the coattails of human beings. So animals suffer death because humans sinned, and humans suffer death. But it says in that passage that not just human beings but the entire creation—well then, who does that leave that has suffered on this earth? Animals will experience the resurrection of the sons of God. So since some animals who have suffered [and who are] alive in this lifetime on this fallen earth will … be raised, which animals will those be? I think the most logical answer to that would be—and wouldn’t it be just like a loving God to do this for His children—that He will bring back those precious pets that He has entrusted to our care. We have a golden retriever named Maggie, we had a dalmatian named Moses, [and] we had a springer spaniel before that named Champ. Those dogs are very real to me and I anticipate actual reunion with them in heaven. By the way, I didn’t use to believe that, until I spent those two or three [years] studying Scripture intently every day on that subject. The Bible changed my mind on that subject.

NOW I have heard everything!

First, Alcorn spent two or three years studying this issue? Really? Surely, he using hyperbole (or lying). How long can it take to read and study the relevant passages of Scripture? Not long, surely no longer than an afternoon in the study with a Bible and a good bottle of scotch. I suspect that Alcorn wants people to know that he really, really, really studied this issue before he opened his mouth and added to the canon of nonsense for which Evangelicals are known.

Second, one of the biggest weapons atheists have in their arsenal is the fact that the Christian God allows innocent animals to suffer. Unlike humans who are sinners, animals stand blameless before God — except when they pee on God’s white shag carpet. The sheer violence and brutality in the animal kingdom are sure signs of that either the Christian God is a psychopath who gets off on suffering, is indifferent towards suffering, or doesn’t exist. I will take door number three.

Alcorn likely thinks that he is somewhat answering this challenge by saying that “some” animals will go to Heaven after they die. Animals aren’t sinners, nor can they repent and ask Jesus into their heart, so why does Alcorn assert that only “some” animals” will make it through the Pearly Gates? Simply put, Alcorn believes that only animals (pets) owned by Christians will inherit the Kingdom of God. In Alcorn’s mind, God is an awesome dude. He loves his bleating sheep so much that he would never eternally separate them from their pets. Alcorn leaves unsaid the flip-side of his argument: that the pets of unsaved people will go to Hell when they die. You can’t have Heaven without Hell, right? Or so Evangelicals have been saying f-o-r-e-v-e-r.

Imagine being a dog or cat at the local animal shelter. You so want to go to a good home, to be adopted by a loving, caring family. But now you have to worry about your prospective family’s religious beliefs. Choose wrong and you will be an eternal hotdog on a stick. Choose right and you will never have poop in an uncleaned cat box again.

Third, Alcorn doesn’t mention non-dog pets. Will Christian-owned snakes, pot-belly pigs, hamsters, gerbils, cats, horses, raccoons, squirrels, birds, lizards, and fish go to Heaven when they die? Or do Calvin’s doctrines of election and predestination apply to pets too; that only dogs chosen from before the foundation of the world will be saved from the wrath to come?

Deacon Bob and Preacher Billy are out and about in the community knocking on doors. They come upon the home of an atheist who just so happens to own 666 dogs and cats.

The atheist cracks the door open, holding back with his foot numerous dogs who want to escape or hump Preacher Billy’s leg.

Atheist: Can I help you?

Preacher Billy: Hello, my name is Billy, and this is Bob. We are in your neighborhood today knocking on doors. We would like to share the good news of the gospel with you and your dogs.

Atheist: My dogs? (saying to himself, these nutters are crazier than the Jehovah’s Witnesses)

Deacon Bob: Yes, after three years of intensive Bible study, we have learned that dogs too can go to Heaven when they die!

Atheist: Really? (saying to himself, these two guys have brain damage)

Preacher Billy: Yep. According to God’s inspired, inerrant, infallible Word, some dogs go to Heaven when they die!

Preacher Billy: Yes. Their salvation is contingent on their owner being a Christian. If their owner is, uh, you know, an atheist like you, they will go to Hell when they die. Surely, you want your dogs to run the golden streets of the New Jerusalem for eternity, right? Please, Mr. Atheist, ask Jesus to save you.

Just pray this prayer: Dear Baby Jesus, I know I am a sinner. I know you died on the cross to save me and my dogs. I ask you to come into my heart right now and save me, and take me and my dogs to Heaven when we die! In Jesus’ name, Amen.

Atheist: Sorry, Dude, but there’s no God, no Heaven, no Hell.  When my dogs die, I put them in a hole in my backyard. End of story.

Deacon Bob: Blasphemy! (Holding up an oversized rawhide bone) Come out from him, Satan!

The atheist derisively laughs, opens the door, and turns 666 dogs on Preacher Billy and Deacon Bob. These men of God flee into the night, shouting, “someday you’ll be burning in Hell with all your dogs! And then you will know we were right!”

The next day Preacher Billy and Deacon Bob are nowhere to be found. Late that day, the local newspaper reported that the two were chased by a horde of demon-possessed dogs, plunging over a cliff to their deaths (much like the Bible story about the Maniac of Gadera).

Moral of the story: beware of atheists and their dogs.