Quote of the Day: What Does U.S. Attorney General Bill Barr Really Want? 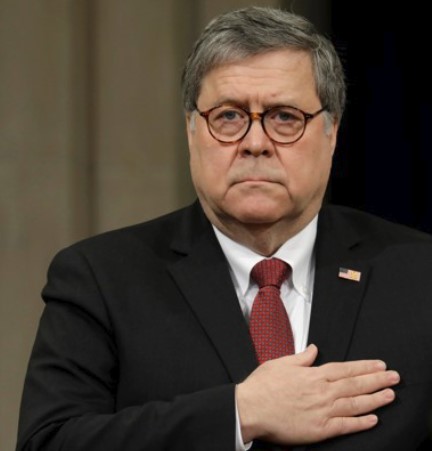 But at least since Mr. [Bill] Barr’s infamous speech at the University of Notre Dame Law School, in which he blamed “secularists” for “moral chaos” and “immense suffering, wreckage and misery,” it has become clear that no understanding of William Barr can be complete without taking into account his views on the role of religion in society. For that, it is illuminating to review how Mr. Barr has directed his Justice Department on matters concerning the First Amendment clause forbidding the establishment of a state religion.

In Maryland, the department rushed to defend taxpayer funding for a religious school that says same-sex marriage is wrong. In Maine, it is defending parents suing over a state law that bans religious schools from obtaining taxpayer funding to promote their own sectarian doctrines. At his Department of Justice, Mr. Barr told law students at Notre Dame, “We keep an eye out for cases or events around the country where states are misapplying the establishment clause in a way that discriminates against people of faith.”

In these and other cases, Mr. Barr has embraced wholesale the “religious liberty” rhetoric of today’s Christian nationalist movement. When religious nationalists invoke “religious freedom,” it is typically code for religious privilege. The freedom they have in mind is the freedom of people of certain conservative and authoritarian varieties of religion to discriminate against those of whom they disapprove or over whom they wish to exert power.

This form of “religious liberty” seeks to foment the sense of persecution and paranoia of a collection of conservative religious groups that see themselves as on the cusp of losing their rightful position of dominance over American culture. It always singles out groups that can be blamed for society’s ills, and that may be subject to state-sanctioned discrimination and belittlement — L.G.B.T. Americans, secularists and Muslims are the favored targets, but others are available. The purpose of this “religious liberty” rhetoric is not just to secure a place of privilege, but also to justify public funding for the right kind of religion.

Mr. Barr has a long history of supporting just this type of “religious liberty.” At Notre Dame, he compared alleged violations of religious liberty with Roman emperors forcing Christian subjects to partake in pagan sacrifices. “The law is being used as a battering ram to break down traditional moral values and to establish moral relativism as a new orthodoxy,” he said.

Barr watchers will know that this is nothing new. In a 1995 article he wrote for The Catholic Lawyer, which, as Emily Bazelon recently pointed out, appears to be something of a blueprint for his speech at Notre Dame, he complained that “we live in an increasingly militant, secular age” and expressed his grave concern that the law might force landlords to rent to unmarried couples. He implied that the idea that universities might treat “homosexual activist groups like any other student group” was intolerable.

This form of “religious liberty” is not a mere side issue for Mr. Barr, or for the other religious nationalists who have come to dominate the Republican Party. Mr. Barr has made this clear. All the problems of modernity — “the wreckage of the family,” “record levels of depression and mental illness,” “drug addiction” and “senseless violence” — stem from the loss of a strict interpretation of the Christian religion.

The great evildoers in the Notre Dame speech are nonbelievers who are apparently out on the streets ransacking everything that is good and holy. The solutions to society’s ills, Mr. Barr declared, come from faith. “Judeo-Christian moral standards are the ultimate utilitarian rules for human conduct,” he said. “Religion helps frame moral culture within society that instills and reinforces moral discipline.” He added, “The fact is that no secular creed has emerged capable of performing the role of religion.”

Within this ideological framework, the ends justify the means. In this light, Mr. Barr’s hyperpartisanship is the symptom, not the malady. At Christian nationalist gatherings and strategy meetings, the Democratic Party and its supporters are routinely described as “demonic” and associated with “rulers of the darkness.” If you know that society is under dire existential threat from secularists, and you know that they have all found a home in the other party, every conceivable compromise with principles, every ethical breach, every back-room deal is not only justifiable but imperative. And as the vicious reaction to Christianity Today’s anti-Trump editorial demonstrates, any break with this partisan alignment will be instantly denounced as heresy.

“What does Bill Barr want?”

The answer is that America’s conservative movement, having morphed into a religious nationalist movement, is on a collision course with the American constitutional system. Though conservatives have long claimed to be the true champions of the Constitution — remember all that chatter during previous Republican administrations about “originalism” and “judicial restraint” — the movement that now controls the Republican Party is committed to a suite of ideas that are fundamentally incompatible with the Constitution and the Republic that the founders created under its auspices.

Mr. Trump’s presidency was not the cause of this anti-democratic movement in American politics. It was the consequence. He is the chosen instrument, not of God, but of today’s Christian nationalists, their political allies and funders, and the movement’s legal apparatus. Mr. Barr did not emerge in order to serve this one particular leader. On the contrary, Mr. Trump serves a movement that will cynically praise the Constitution in order to destroy it, and of which Mr. Barr has made himself a hero.