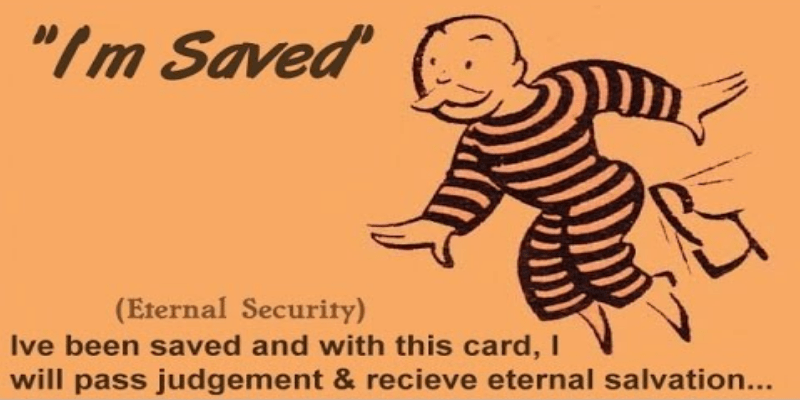 Both you and Ray [Boltz] were very passionate about the Lord for many many years. And Ray still is. I don’t believe in people losing their salvation so I look to you as a brother who got very very weak in his faith. I think Ray is a very strong believer who has found a liberal church to condone his lifestyle. So are they all unsaved because they don’t see it like us?? I say who are we to make that judgement call??? If you believe in Christ from your heart you are given eternal life period..you are saved. I believe you both have done that.

The commenter is a proponent of the doctrine of once-saved-always-saved. At the age of fifteen, I asked Jesus to save me. For the next thirty-five years, I was a committed, devoted follower of Jesus. For twenty-five of those years, I pastored Evangelical churches in Ohio, Texas, and Michigan. Based on my decision at age fifteen, the commenter mentioned above concluded that I was still a Christian — once-saved-always-saved. While I know this doctrine well — having grown up in the Independent Fundamentalist Baptist (IFB) church movement — I have long believed that this idea is absurd. Yes, I lived as a Christian for four decades, but there’s is nothing in my life today that remotely suggests that I am still a Christian. I have spent the past decade opposing Christianity in general, and Evangelicalism in particular. I proudly self-identify as an atheist and agnostic. Yet, according to this commenter, because I sincerely prayed the sinner’s prayer at age fifteen, I am still a Christian. There is nothing I can do to divorce Jesus. We are married, no matter what I do or how I live. I can fuck every other God and make a mockery of my marriage to Jesus, yet I am still married to him. Nothing, according to the Bible, can separate me from the love of Christ. (Romans 8:31-39) Think, for a moment, about the men featured in the Black Collar Crime Series. All of these men likely had similar religious experiences to mine. The difference, of course, is that they raped and sexually molested children and took advantage of vulnerable congregants, and I did not. Yet, according to the aforementioned commenter, these vile, disgusting “men of God” are still saved, and when these men die, they will inhabit the same Heaven as the children and congregants they harmed. Is there any Christian doctrine more disgusting than once-saved-always-saved?

Look, I get it. Evangelicals who believe in once-saved-always-saved are hemmed in by their literalistic beliefs and interpretations of the inspired, inerrant, infallible Word of God. Instead of stating the obvious — that people can and do walk away from Christianity — proponents of once-saved-always-saved are forced to defend the indefensible. Christian salvation is reduced to a momentary transaction in time, and once the transaction is completed salvation is sure and secure. Are there Bible verses that teach once-saved-always-saved? Absolutely! But there are also verses that teach the perseverance/preservation of the saints and conditional salvation. Any and every doctrine Christians believe can be justified by the Bible. The Bible is a book that can be used to prove almost anything. When I am asked if the Calvinists or the Arminians are right, I reply, “they both are.”

The Bible speaks of there being a “faith once delivered to the saints.” This suggests that Christianity is singular in nature. However, it is clear, at least to me, that there are numerous Christianities, each believing that their sect/church is True Christianity®. Christians can’t even agree on the basics: salvation, baptism, and communion. Millions of theological tomes have been written, each defending a peculiar theological system. According to Evangelicals, the Bible can be understood by children, yet pastors spend years in college learning how to interpret the Bible. Their church office shelves are lined with books that break down the Bible into singular words and clauses. Baptists and Campbellites fight to the death over the one Greek word in Acts 2:38 — the word eis. Evangelical Internet forums and Facebook groups are filled with people who spend their days and nights debating the nuances of this or that interpretation of the Bible. Once-saved-always-saved is one such interpretation.

From Pascal’s perspective, once-saved-always-saved is a good deal. I have said the prayer, and now I am headed for God’s Heaven when I die. No matter what I say or do, a room has been reserved for me in the Father’s mansion. (John 14:1-6) Sweet deal, right?

I have decided to call myself a Christian Atheist®. Sounds crazy, I know, but is this not the logical conclusion of once-saved-always-saved? I am in every way an atheist, yet because of the prayer I prayed at the altar of Trinity Baptist Church in Findlay, Ohio at age fifteen, I am a Christian. Or so some Evangelicals say, anyway.

I feel embarrassed for Jesus. Well, I would anyway, if he were still alive. But, he’s not. Jesus’s bones lie buried somewhere in the sandy soil of Palestine. Consider what I am saying here. I deny that Jesus resurrected from the dead. Is not Jesus’s resurrection central to Christian belief and practice? How can one deny Jesus’s resurrection and his divinity and still be a Christian?