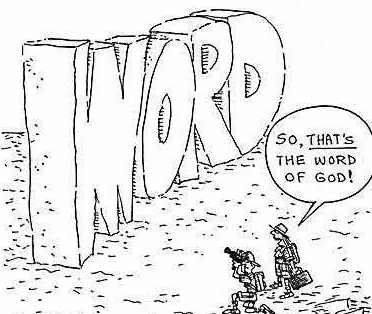 An anonymous commenter left the following comment (no longer publicly available) on the Galatians 4 blog:

if the Bible is not truth; the Word of God – then NO ONE can be saved. If we do not believe the Bible, we cannot be saved.

This comment was left on a post on a blog entry titled, The IFB Pastor Turned Atheist: Those Who Fall Away. The post is about my defection from Christianity. The author of the blog post agrees with the anonymous commenter’s view: that if we do not believe the Bible we cannot be saved. (Interestingly, the owner of the Galatians 4 website is now an unbeliever.)

Here’s the problem with this view:

Second, the first-century Christian church had no Bible. They had the Old Testament, a text that makes no mention of Christian salvation and Christian oral traditions. Besides, most early Christians could not read or write.

Third, the gospels were not written until decades after Jesus Christ died and resurrected from the dead. The writings of the Apostle Paul were written first, and they are quite sparse when it comes mentioning Jesus and clearly articulating the Christian gospel. Paul’s writings need the gospels for the Christian/Pauline gospel to make sense.

Fifth, illiteracy and the cost of a printed Bible meant that most Christians did not own a copy of the Bible. They relied on others to read the Bible to them or pass on the oral stories of Christianity.

Sixth, it took centuries to complete the canon of the Christian Bible. Prior to this, Christians had “incomplete” Bibles, often containing only a few books of the Bible.

The anonymous commenter does what a lot of Christians do: he takes how things are now and reads it back into Christian Church history. You know, if the Oxford, Calf-Skinned KJV Scofield Bible was good enough for the Apostle Paul it is good enough for me.

Most Christians have little knowledge about the long, complex, and contradictory history of the Bible and the Christian church. This lack of historical knowledge allows them to make absurd statements like the anonymous commenter made on the Galatians 4 blog.

The phrase “word of God” appears 49 times in the Bible. As you can easily see, the phrase has several different meanings:

The word “scripture” appears thirty-two times in the Bible. Most of the time, the word scripture refers to the Old Testament, a text that is devoid of any mention of the Christian gospel, or ANYTHING Christian, for that matter.

The Bible states in John 1:1-2 that Jesus was the Word:

For the word of God is quick, and powerful, and sharper than any two-edged sword, piercing even to the dividing asunder of soul and spirit, and of the joints and marrow, and is a discerner of the thoughts and intents of the heart. Neither is there any creature that is not manifest in his sight: but all things are naked and opened unto the eyes of him with whom we have to do. Seeing then that we have a great high priest, that is passed into the heavens, Jesus the Son of God, let us hold fast our profession.

Raise your hand if you have heard Hebrews 4:12-13 quoted in reference to the Bible, the Word of God? Anyone raised in a Baptist church has heard this countless times. However, look closely at Hebrews 4:12-14. Is the word of God here the Bible or Jesus? Notice the male pronoun in the phrase manifest in HIS sight? Verse 14 makes the “who” of the text very clear when it says, “Seeing then that we have a great high priest, that is passed into the heavens, Jesus the Son of God…”

The whole point of this exercise is to show that it is important to NOT read preconceived ideas and beliefs into the Biblical text. Pastors breed ignorance when they quote verses to “prove” a point and do not actually convey to the congregation what the text actually says. They also breed ignorance when they refuse to say, not “the Bible says” or “God says,” but “our Church says,” or “I say.” Far too many preachers are like Al Shannon, Jr, a fifty-year member of the Church of Christ. Shannon says about himself:

I adhere to the principle of speaking where the bible speaks, and remaining silent where the bible is silent. I do not add to or take from God’s Word nor do I go beyond that which was written. I prove all things by the scripture, and by no other source. This site is designed to preach the gospel and doctrine of [the Churches of] Christ unto all the world.

This kind of thinking is common in every sect that believes the Bible is an inerrant, infallible text. They think THEIR interpretation is the one, true, exact interpretation, and they alone are preaching the pure word of God. They are naïvely or deliberately ignorant about the influence of geography, culture, environment, and tribal affiliation on what one believes. (Please see Why Most Americans are Christian.) In their minds, they believe exactly what was written on parchment 2,000 years ago. In Shannon’s sect, many of the churches have a building cornerstone that says AD 33. That’s right, just like the Catholic and Landmark Baptist sect, they believe they are the one true church, established by Jesus to propagate the true gospel to the ends of the earth.

This kind of intransigence closes the mind off from any other belief or idea. Until people can dare to think that they might be wrong, that their sect might be wrong, or that the claims they make for the Bible might be untrue, there is no hope of reaching them. They are intellectually walled off from any voice but their own.

Want to know more? I encourage you to read several of Dr. Bart Ehrman’s books.

How Jesus Became God: the Exaltation of a Jewish Preacher from Galilee