A 1997 Bryan Times Editorial by Bruce Gerencser: “America is in Trouble, Big Trouble” 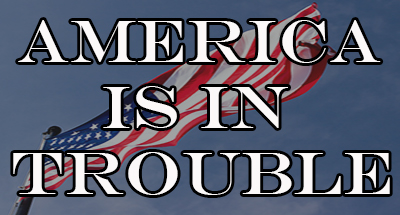 Published on September 25,1997. At the time, I was pastor of Our Father’s House in West Unity, Ohio. This is a good example of how I used to think about life, God, the Bible, sin,  and culture. This was not a Letter to the Editor. I wrote it for the Community Voice editorial column on the editorial page of The Bryan Times.

America is in trouble… big trouble. The moral and ethical structure of our nation is crumbling at its very foundation. We, at one time, accepted the “law of God” as our moral and ethical standard, but now, relativism reigns supreme. Law, morality, and ethics are relative to the situation and circumstance. It seems that there are no absolutes. We debate such issues as abortion, euthanasia, capital punishment, homosexuality, etc., and by our debate suggest that God has not spoken on these issues. God’s law is not a mystery. His law is clear. It is we, as defiant creatures, who have shaken our fist at the heavens and said, “We will not have You to rule over us.” As a result, instead of being ruled by the laws of Jehovah, we are ruled by the laws and system of corrupt humans. We have become a nation of people aptly described as “they did what was right in their own eyes.”

Who do we blame for the mess we are in? It is easy to blame the politicians. It is easy to point to the Clinton/Gore administration and say “they are the problem.” Recent articles in the Bryan Times reported on the meeting of the Christian Coalition. They were quick to blame the Democrats for all the ills in our society, all the while ignoring the ethical and moral lapses of those they support (i.e. Newt Gingrich). No, I would contend that what we see in Washington is a consequence and not a source of our ills.

The blame must be laid on the church and her ministers. There was a day when the church and her ministers were respected and were considered the moral voice of the community and our nation. Such is not the case today. Society has concluded that the church is irrelevant and her ministers are nothing more than educated buffoons. We are told to keep our religion within the four walls of the church (separation of church and state you know) and to keep our moral and ethical pronouncements to ourselves. If a prophetic voice is raised, screams of “Thou shalt not judge” are quickly heard. We, as ministers of the gospel, should be ashamed for allowing our voices to be silenced in such a manner. God has called us to be a clear voice of light in our decadent society. How then, can we be the prophets of God has called us to be?

Second, we need to be reminded of the authority of the Bible and the law of God. The Bible is God’s written revelation to man. His laws are to be loved and obeyed. The pulpits of America have been silent to the law of God and as a result antinomianism reigns. Church members have no absolutes and as a result they follow their own rules or they let “their conscience be their guide.” The greatness of a nation is directly related to the respect and obedience it gives to the law of God.

Third, we need to return to being  bastions of absolute truth and morality. Ministers need to be thundering prophets instead of mild, wimpy church mice. There is no time for compromise. The battle is real and we must fight. On Judgment Day we will not be judged on our popularity, but rather on how we faithfully fought the battle and kept the faith.

Fourth, we need to stop trying to be culturally relevant to such a degree that we sacrifice what is true and honoring to God. The appearance of Audio Adrenaline at the Williams County Fair is case in point. In an effort to “reach”young people (and perhaps fill the grandstands) two high-powered “Christian” rock ‘n roll groups were booked at the fair. When Audio Adrenaline took the stage the party began to rock and roll. Complete with body piercing and mosh pits, we were given a quick lesson on how far we have slipped in our Christian society. We see the troubles that young people face and we think by lowering the standard and meeting them at the lowest common denominator we’ll “reach” them. Sadly we have been deceived. Young people need to hear truth, absolute truth. They need to hear preaching that challenges, provokes, and rebukes. They need to hear the kind of preaching that ultimately lead them to a higher standard in Jesus Christ. We have become convinced that the timeless methods that God has ordained no longer work. This is the ultimate deception.

Fifth, we need to return the word SIN to our vocabulary. God says sin is transgression of the law of God. The church and her ministers are not the final authority on what is holy and what is sin. God is. Ministers are called on to repeat what God has said (thus saith the Lord). Because of the fear of men we do not preach on the “hard” subjects. We piously leave that to the “conscience” of the people. Such denial of responsibility will not wash with God on Judgment Day. We desperately need a revival of preaching against sin and the preaching of the solution to sin that is found in Jesus Christ.

When will we learn that people want truth and not compromise? We fear being rejected or ridiculed. We fear our message will not be heard or that we will be viewed as a Bible thumping fanatics. Well, a cursory reading of the Bible will show that we would be in good company. The prophets of old did not conform to their society, but instead demanded that their society conform to the truth of God’s Word. They demanded of all men everywhere that they”repent and believe the gospel.”

I would ask my fellow ministers and fellow Christians…when our eulogy is read what will be said? Will we be remembered as one who was a true follower of Jesus Christ? One who was faithful to his holy Word? Will our life reflect one who was a radical follower of Jesus? Life is short and in but a few days we will pass from this life. Let us labor for that which is eternal. Let us restore those things we have let slip and restore God as the rightful ruler of our nation.