Why Are So Many Evangelical Preachers Arrogant and Full of Themselves? Part One 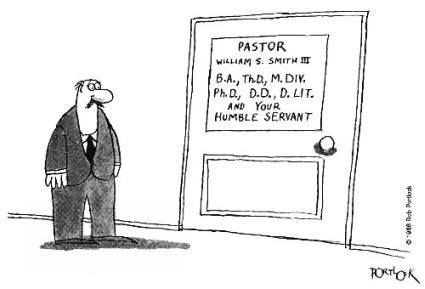 Why are so many Evangelical preachers arrogant and full of themselves? While it would be easy to answer this question simply by saying that these so called “men of God” are narcissistic Assholes for Jesus®, the correct answer is more complex and nuanced. In what follows, I will use the fifty years I spent in Christianity and the twenty-five years I pastored churches in Ohio, Texas, and Michigan as a backdrop in an attempt to answer this question. While no two life stories are exactly the same, I am confident that I can pick things out of my own story that can also be found in the life stories of many Evangelical preachers. Readers who were long time members of Evangelical churches or once in the ministry themselves will likely agree with what I have written here. Try as we humans might — thinking we are special, unique snowflakes — to frame our stories as different from the rest, certain sociological, psychological, biological, and tribal influences directly affect how we live our lives, revealing that none of us is as radically distinctive as we think we are.

In the 1960s, my parents moved to California, hoping to find a pot filled with gold at the end of the proverbial rainbow. While they never found great wealth, my parents did embrace certain religious and political beliefs that would dramatically change not only their lives, but mine. Mom and Dad both found Jesus at Tim LaHaye’s church — Scott Memorial Baptist Church — and while attending Scott Memorial were exposed to the uber-right-wing anti-communist group The John Birch Society. My parents, overnight, became Fundamentalist Christian zealots and defenders of right-wing political extremism. While in California, Mom campaigned for Barry Goldwater, hoping that he would unseat incumbent Democratic president Lyndon Johnson in the 1964 presidential election. Goldwater lost the election, garnering only thirty-eight percent of the popular vote.

Not long after my parents became born-again Christians, I too gave my heart to Jesus. This youthful, uninformed, manipulated-by-children’s-church-workers decision was the first step of many I would take as I followed after and served the Evangelical Jesus. Not long after asking Jesus into my heart, I told Mom that I wanted to be a preacher when I grew up. A decade later, as is common among Independent Fundamentalist Baptists (IFB), I made another public profession of faith, and a few weeks later I informed the church that I believed God was calling me to preach. This one moment, publicly saying that Jesus wanted me to be a “man of God,” would color and affect virtually every important decision I would make for the rest of my life.

A week or so after I let the church know I was called to preach, I preached my first sermon. I was fifteen. I would preach my last sermon thirty years later.  During this span of time, I attended an IFB college to study for the ministry, married a girl who was looking to marry a preacher, was the assistant pastor of two churches, and pastored five churches. I also started four new churches, two Christian schools, and a multi-church youth fellowship. While at the various churches I pastored, I started street preaching ministries, nursing home ministries, and youth groups, along with preaching numerous special meetings (revivals, conferences, etc.). I also attended pastors’ fellowship meetings, and supported fellow pastors when their churches had revivals and conferences.

In the mid-1970s, I spent three years at Midwestern Baptist College training for the ministry. I met Polly there, and during the summer between our sophomore and junior year years, we married, excited that God had called both of us to into full-time service — me to a life of praise and adulation and Polly to a life of watching the nursery and dutifully modeling the patriarchal way of life. It should come as no surprise then, that Polly’s view of the twenty-five years we spent in the ministry is very different from mine.

During the three years I spent training for the ministry, I taught Sunday school, worked in the bus ministry, helped with the youth group, and held services at a drug rehab/halfway house in Detroit. Unlike many of the men who attended Midwestern, I actually gained a lot of preaching experience by the time we left Midwestern in the spring of 1979. It was not uncommon for men to graduate from Midwestern having only preached sermons in their homiletics class and infrequent services at their home churches.

While attending Midwestern, it was drilled into my head that it was GOD, not MAN, who had called me to preach; that no one but God could tell me what to preach. I was also taught the importance of following the leading of the Holy Spirit, not only in my preaching, but also in determining whether I should start a new church or become the pastor of an established church. As a preacher, according to what was modeled to me by my pastors and what I was taught in college, I answered to no one but God. Jesus may have been head of the church, but on earth I was the final authority on spiritual and theological matters.

Baptists love to attack the Roman Catholic Church with its Pope and his infallible pronouncements, yet they seem blind to the fact that in their churches, every church has its own little pope — the pastor. Saved by God, called by God, filled with the Spirit of God, led by God, and given absolute authority, these Evangelical Chosen Ones rule their churches as kings and potentates. Pastors, commanded by God to “humbly” sit at the head of the table, expected congregants to submit to their God-given authority, obeying those that have the rule over them (Hebrews 13:17).

Some Evangelical churches, hoping to correct the excesses of the single-pastor church rule, have a plurality of pastors (elders) or have governing boards.  All these polity changes do is increase the number of bwanas. The end result is the same: a man or small group of men rule over the church. And more often than not in churches with governing boards, there is one man, the senior/preaching pastor, who is the hub around which the church turns. As is clear to anyone who is paying attention, Evangelical churches are all about the man who stands at the front of the church and preaches and teaches the Bible. Whether intentional or not, Evangelical churches becomes Pastor So and So’s church. His name is on the sign, bulletin, and every piece of advertising put out by the church. It is not uncommon for congregants to say, when asked where they attend church, to respond, I go to Pastor Ain’t He Awesome’s church. Churches pastored by men with John Holmes-sized oratorical prowess take great pride in having a pastor who is a great pulpiteer.

I preached thousands of sermons during my time as a pastor, and, hopefully without coming off as braggadocios, was considered by the people I pastored and my peers to be an excellent public speaker. My sermons were well-crafted, steeped in study and prayer, and delivered with passion and animation. I expected every sermon I preached to be used by God to save the lost and motivate the saints. I expected to see visible human responses — be it nodding heads, shouts of “amen,” raised hands, or tears — during my sermons, and at the end, I expected to see movement towards the front during altar calls. I was of the opinion then, and am still of this persuasion today, that public speakers should always bring audiences to a place of acting on that which they have heard — be it getting saved, getting right with God, or advancing this or that political cause.

Evangelical preachers believe that the Bible is the inspired, inerrant, infallible word of God. Every word is straight from the mouth of God, and with rare exception these God-breathed words are meant to be understood literally. This way of reading the Bible forces Evangelical preachers to defend all sorts of absurd beliefs; things such as the idea that the universe was created in six twenty-four-hour days and is six-thousand and twenty-two years old. Ministries such as Answers in Genesis and Creation Research Institute are established to give literalism a veneer of respectability, and countless apologetical books are published in the hope that pastors will read them so they are better equipped to defend Evangelicalism’s literalistic view of the Bible.

Let me conclude this post by tying everything together, setting the foundation for what I will write tomorrow. Evangelical preachers are saved and called into the ministry by God. They are viewed as people uniquely qualified to teach and preach the Bible. From the moment Evangelical preachers are called into the ministry until they preach their last sermon, they are treated as special and placed in positions of power and authority few Christians ever experience. Evangelical pastors who go off to college to be trained for the ministry are reminded by their professors and chapel speakers that God has given them the greatest job on earth; that becoming president of the United States would be a step down for them; that God will greatly reward them in heaven if they give their hearts, souls, and minds to the work of the ministry; that if God so chooses, they might even see Him use them to reap harvests of souls and build large churches.

Trace the life of the typical Evangelical preacher and you will find a lifetime of adulation, praise, and being in the spotlight. Even in small country churches deep in back-woods hollers, preachers are honored and revered. Is it any wonder, taking all that I have said in this post, that many Evangelical preachers become arrogant and full of themselves? Rare is the man who can handle a lifetime of praise and adoration, coupled with absolute power, control, and authority, and not be adversely affected, particularly when you factor in the Type-A, narcissistic, workaholic, driven personalities many preachers have. And rarer still is the man who is willing to admit these things.

I am sure some Evangelical preachers will self-righteously and indignantly say that they were NOT like me, but with their protestations they will only prove my point. I hope, at the very least, Evangelical pastors, evangelists, and missionaries will shut up and listen to what an old curmudgeon has to say. I may now be an atheist, but my leaving the ministry and Christianity has allowed me to have a unique view of Evangelical preachers and the work of the ministry. Perhaps I yet have a sermon to preach to those who claim by their words and actions to be know-it-alls for God.