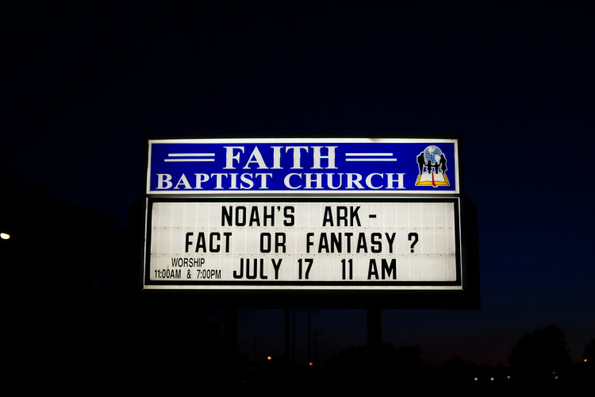 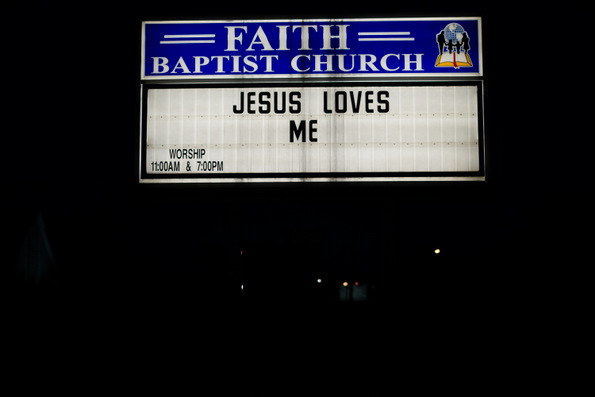 Faith Baptist Church, Ottawa, Ohio. (No pastor name listed, no website) Faith Baptist asks passersby, Noah’s Ark — Fact or Fantasy? The correct answer is FANTASY, but something tells me that Faith Baptist congregants believe otherwise. If the goal of slogan-driven church signs is to evangelize passersby, shouldn’t this sign say, Jesus Love YOU? 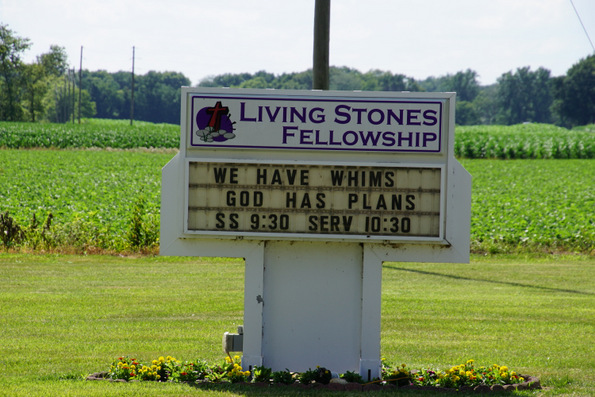 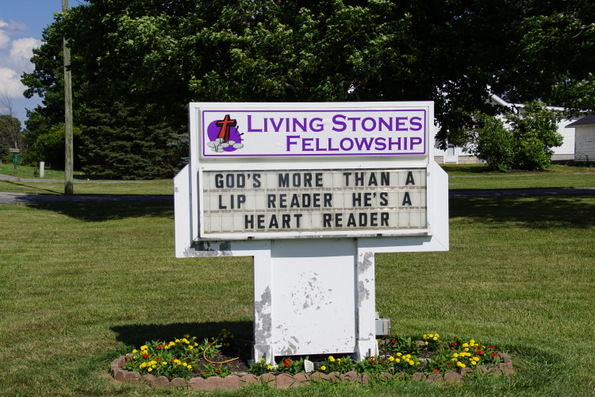 Living Stones Fellowship, McComb, Ohio, Rick Rowe, pastor. Living Stones Fellowship is a “non-denominational, family-oriented church.” Living Stones is affiliated with Foundation Ministries U.S.A. — a charismatic Evangelical fellowship. Living Stones wants passersby to know that humans have “whims” but God has “plans.” Anyone who has bothered to read the Bible knows that many of God’s “plans”  are quite “whimsical.” God creates humans and then drowns all of them in a flood — save eight people. God creates humans, only to then have them disobey him, forcing God to send himself to earth to provide a blood atonement for the very people he created. Sure sounds whimsical to me.

I actually preached at this church in the early 1990s. At that time, the building was owned by a Reformed Baptist congregation. Rick Yockey, a man I met at a Pastor’s Fellowship in Mansfield, Ohio was the pastor. Yockey had an affair. He was married to a woman I attended church with in the 1970s — Trinity Baptist Church, Findlay, Ohio. Yockey, now divorced, is a mortgage loan officer for Fifth Third Bank. 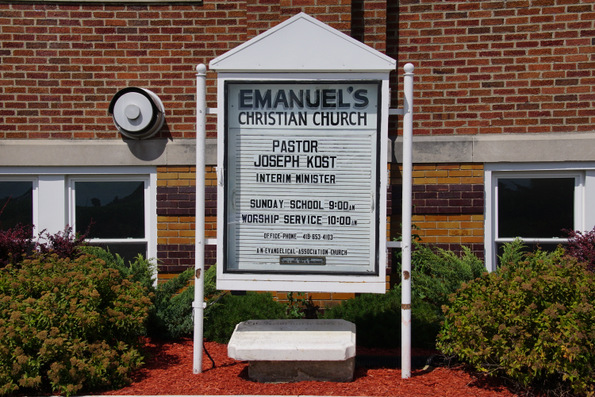 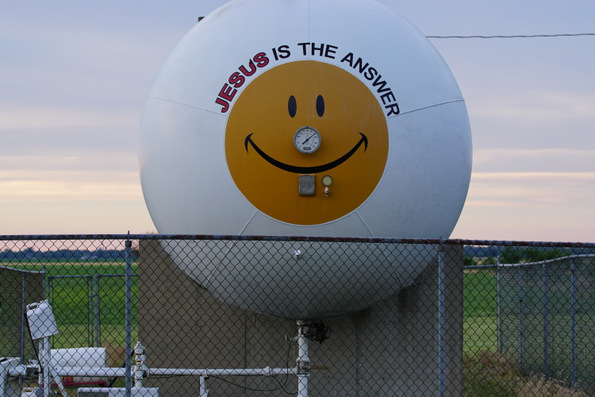 Sign painted on nose of TJ Propane, Weston, Ohio gas storage tank. What is the question? 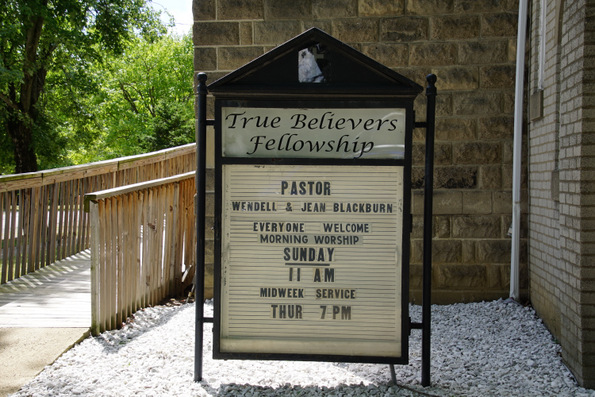 True Believers Fellowship, Holgate, Ohio, Wendell and Jean Blackburn, pastors. True Believers’ Facebook page says that the church is a charismatic congregation. I wonder, have we finally found God’s True Church®? TRUE believers, not like all those FALSE believers in other churches. 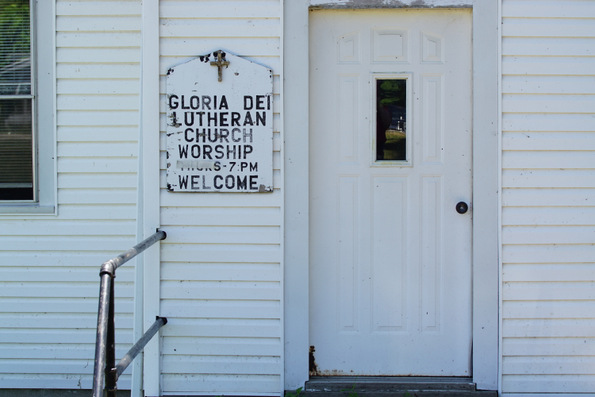 Gloria Dei Lutheran Church, Fort Wayne, Indiana. (No church website) Gloria Dei is affiliated with the The Lutheran Church-Missouri Synod — the Fundamentalist wing of the Lutheran church. At one time, this church met on Thursdays at 7:00 PM. The church now meets at 7:00 PM on Wednesdays. Not wanting to spend the Lord’s money on an attractive sign, someone in the congregation put masking over Thursday, and with a felt marker wrote Wednesday. Good job! 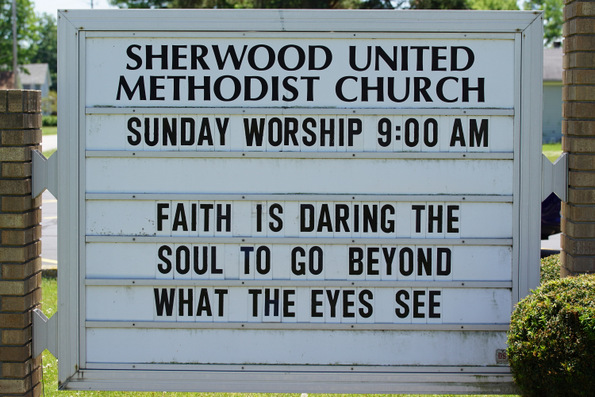 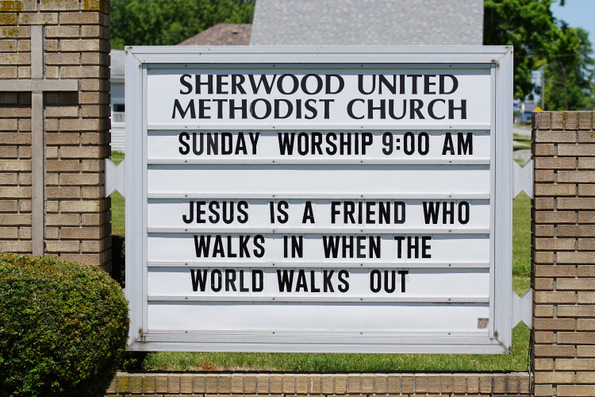 Sherwood United Methodist Church, Sherwood, Ohio, Aric Clark, pastor. According to its website, Sherwood United Methodist Church “reaches out to the hungry in body or spirit.” The church does have a significant food pantry ministry, so kudos to them . Sherwood United Methodist’s sign says that Christian faith takes people beyond what their eyes can see. How, then, can people “know” where they are? I choose to walk through life with my eyes wide open — no faith needed. Faith says humans have a soul. Reason, the enemy of faith, says humans have a brain. I choose to use my intellect to guide me through this life. Again, no faith needed.