How Does God Do It? 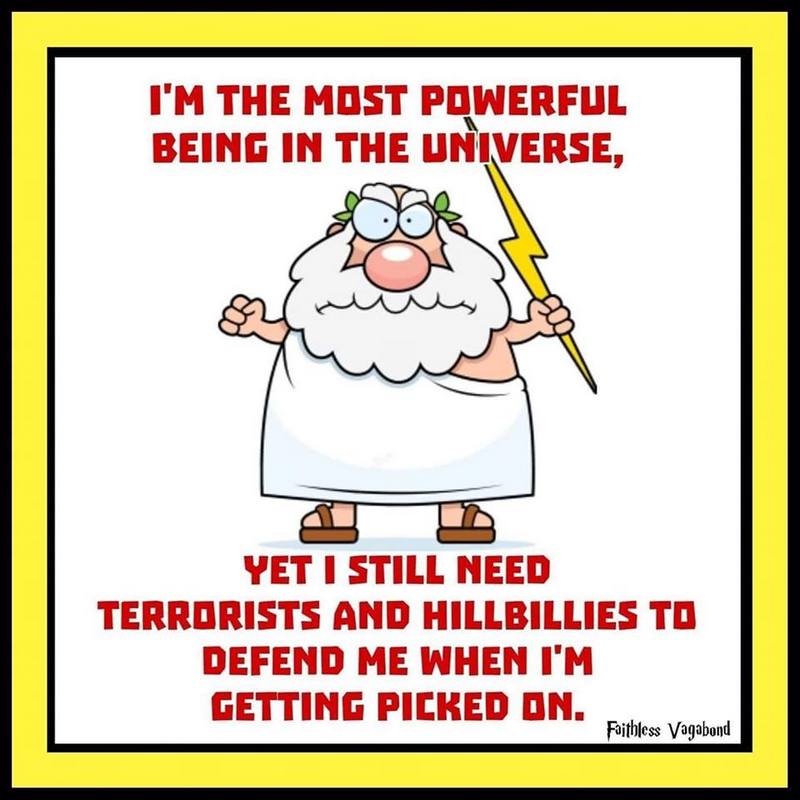 Warning! Honey wagons full of snark ahead, sure to offend Evangelicals, MAGA supporters, and prayer warriors.

Have you ever wondered how God does what he does — allegedly, anyway? God is omnipotent, omnipresent, and omniscient. According to Evangelicals, their deity is an all-powerful God who is present everywhere, and sees, hears, and knows everything. Think about all the things we humans do each and every day, including the stuff we don’t want anyone to see. No matter where we are, the Evangelical God is watching us, and recording our thoughts, words, and deeds — pen and paper, digital or VCR? This God is also, supposedly, in the prayer-answering business. Now, the Evangelical God doesn’t answer Muslim, Buddhist, Jewish, Catholic, or Mormon prayers; that is unless their prayers are for forgiveness of sin and salvation. God only answers the prayers of True Christians®. Think, for a moment, about the billions of prayers that are sent Jesus’ way every day; every prayer a demand for a blessing, help, forgiveness, or travel directions. And if Evangelicals are to be believed, EVERY prayer is answered one of three ways by God: yes, no, not now.

It seems to me that there is not enough time each day for God to get his work done. Maybe that’s why most prayers go unanswered, and those that “seem” answered sure look a lot like self-fulfilled answers. Perhaps God is too busy watching our every move and recording each of them with indelible ink into the Book of Life or some other divine book to be bothered with feeding the hungry, ending war, stopping mass shootings, and healing the sick. Are not cemeteries flashing advertisements that remind us that God is a lousy faith healer; that God is best known for being deaf, blind, and indifferent?

President Donald Trump — a Christian and frequent metaphorical sex partner of Jerry Falwell, Jr. — believes he is the hardest working man to ever live at 1600 Pennsylvania Avenue. Yet, we know better. Trump is a slacker who spends his days watching Fox News, tweeting, eating fast food, playing golf, and undoing everything President Obama did during his presidency. So much Trump should be doing, yet he spends most of his time saying and doing things that help no one, ignoring the pleas of the poor, sick, and homeless. Much like God, wouldn’t you say? God doesn’t heal your dying loved ones, but blessed be the name of the sweet baby Jesus, he sure helps countless grandmas find their lost keys or snag parking spots by the front doors of their favorite grocery stores.

Catholics say that Pope Frank is the vicar of Christ — Jesus’ representative on earth. Now, according to Evangelicals, Catholics aren’t Christians, so the Pope CAN’T be Jesus’ right-hand man. That got me thinking. Maybe, Donald Trump is Christ’s representative on earth. He’s a Christian man. Eighty-two percent of voting white Evangelicals voted for him in the 2016 presidential election. Trump’s been compared to some of the great leaders of the Bible; a man who is unusually blessed and empowered by the triune God of Christianity. And if Trump is the God-ordained CEO of planet Earth, is he not, as God is, accountable for all the unanswered prayers? Trump can do anything but fail. Evidently, anything doesn’t include the prayerful pleas of immigrants. Surely, this is enough of a reason to vote the man out of office in 2020. Not that anything will change, prayer-wise. If God is anything, he’s fair when it comes to ignoring prayers. Democrats, Republicans, Libertarians, and Independents alike find that God is nowhere to be found.

It’s possible, I suppose, that God uses his angels to keep the machinery running. He might even use Satan and demons to help. Is that not what God did when he wanted to teach a man named Job a lesson? It was Satan who meted out God’s punishment of Job, including afflicting him with boils, killing his children, and destroying his residence and means of income. The Bible says Satan walks about the earth seeking whom he may devour. Evangelicals don’t believe that Satan can hear their prayers, but what if Jesus and Lucifer — brothers according to Mormonism — have an old-fashioned country party-line; and Lucifer is always on the line listening to the secret prayers of Evangelicals. This might explain why so many Evangelical preachers plead with God to deliver them from pornography and other sexual sins, yet they keep committing the same bad behaviors over, and over, and over again. These men of God ask Jesus to keep them pure, but sneaky Lucifer hears their prayers and somehow, some way, causes their holy fingers to type hotchristianbabes.com in Chrome and click GO. If only God had a private line.

Bruce, you are quite a snarky smart ass tonight. What point are you trying to make? Do I always have to have a point? Okay, you got me. Yes, I have a point. I want Evangelicals to think about the claims they make when it comes to their God. Is God really an all-powerful deity who is present everywhere, and sees, hears, and knows everything? What evidence do they have for making such claims? Doesn’t the evidence suggest that God is not omnipotent, omnipresent, and omniscient; that the only God answering prayers is us? Doesn’t the evidence tell us that the change we want in the world will only come through our actions, and not those of an invisible, non-involved God? If we want Trump removed from office, it’s up to us to do it. Hunger, poverty, war, global climate change, sickness, disease, and the Cincinnati Bengals winning the Super Bowl? None of these things is the purview of the Gods — be it the Evangelical God or any other deity. We alone have the power to make the earth a better place to live. We alone have the power to restore sanity to Washington. We alone have the power to provide every child with a better tomorrow. We know, based on the evidence at hand, that the Evangelical God is not the answer. And it’s a pretty safe bet that none of the other extant Gods is the answer either. Perhaps it is time to chuck organized religion in the dustbin of history and chart a new course. If scientists are right about global warming and unchecked population growth, time is running out for the human race — and dogs and cats too. Perhaps it is time to give the humanistic ideal a spin. Christianity, along with its Abrahamic brothers Islam and Judaism, has had centuries to make the earth a better place to live. Surely, it is fair to say that on balance these religions have failed, and they know it.