Al Mohler Upset Over Newsweek Article About the Bible 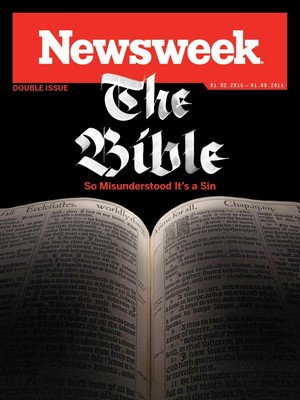 Fundamentalist Al Mohler has his panties in a knot a-g-a-i-n. This happens so often that Mohler recently had to have a pantiedectomy to remove over a dozen pairs of panties that were permanently ensconced in his rectum. It is always something with Mohler, the president of The Southern Baptist Theological Seminary in Louisville, Kentucky.  This time, Mohler is upset about a Newsweek article on the Bible.

The feature article, The Bible: So Misunderstood It’s a Sin, is written by Kurt Eichenwald. Mohler notes that Eichenwald has, in the past, written for The New York Times and Vanity Fair. In other words, Mohler wants his followers to know that Eichenwald is a l-i-b-e-r-a-l.

Mohler contends that Eichenwald is out of his element in writing about the Bible. Evidently, being an investigative reporter is not sufficient to write about the Good Book. I suspect Mohler thinks that only theologians and people who actually believe the Bible is anything more than a fiction book should be the only ones worthy of writing about the Timeless Word of God®.

It always amuses me when people like Mohler play the “you are not qualified” card. Mohler is quite the hypocrite. He routinely writes on subjects he is not qualified to write on; subjects like politics, medicine, art, and science. According to Mohler’s website:

A native of Lakeland, Fla., Dr. Mohler was a Faculty Scholar at Florida Atlantic University before receiving his Bachelor of Arts degree from Samford University in Birmingham, Ala. He holds a master of divinity degree and the doctor of philosophy (in systematic and historical theology) from Southern Seminary. He has pursued additional study at the St. Meinrad School of Theology and has done research at University of Oxford (England)

Best I can tell, Mohler has no serious training in science, politics, medicine, or art, yet he is somehow “qualified to write on these issues.  Of course, I understand why. Evangelical pastors have the ear of God and are qualified to pontificate on any issue “God” wants them to. Evangelical pastors are noted for knowing everything there is to know about anything and everything. Doubt me? Just ask one of them.

I think Mohler is more than qualified to write on a variety of subjects. He is an older man with a lot of education. But then, so is Eichenwald, and that’s my point. Just because Eichenwald is not an Evangelical Christian or a college trained theologian doesn’t mean he is not capable of writing an article about the Bible. He can read and is an investigative reporter and he is well equipped to write on most any subject he puts his mind to.

Here are a few excerpts from the Newsweek article:

They wave their Bibles at passersby, screaming their condemnations of homosexuals. They fall on their knees, worshipping at the base of granite monuments to the Ten Commandments while demanding prayer in school. They appeal to God to save America from their political opponents, mostly Democrats. They gather in football stadiums by the thousands to pray for the country’s salvation.

They are God’s frauds, cafeteria Christians who pick and choose which Bible verses they heed with less care than they exercise in selecting side orders for lunch. They are joined by religious rationalizers—fundamentalists who, unable to find Scripture supporting their biases and beliefs, twist phrases and modify translations to prove they are honoring the Bible’s words.

This is no longer a matter of personal or private faith. With politicians, social leaders and even some clergy invoking a book they seem to have never read and whose phrases they don’t understand, America is being besieged by Biblical illiteracy. Climate change is said to be impossible because of promises God made to Noah; Mosaic law from the Old Testament directs American government; creationism should be taught in schools; helping Syrians resist chemical weapons attacks is a sign of the end times—all of these arguments have been advanced by modern evangelical politicians and their brethren, yet none of them are supported in the Scriptures as they were originally written.

The Bible is not the book many American fundamentalists and political opportunists think it is, or more precisely, what they want it to be. Their lack of knowledge about the Bible is well established. A Pew Research poll in 2010 found that evangelicals ranked only a smidgen higher than atheists in familiarity with the New Testament and Jesus’s teachings. “Americans revere the Bible—but, by and large, they don’t read it,’’ wrote George Gallup Jr. and Jim Castelli, pollsters and researchers whose work focused on religion in the United States. The Barna Group, a Christian polling firm, found in 2012 that evangelicals accepted the attitudes and beliefs of the Pharisees—religious leaders depicted throughout the New Testament as opposing Christ and his message—more than they accepted the teachings of Jesus.

Newsweek’s exploration here of the Bible’s history and meaning is not intended to advance a particular theology or debate the existence of God. Rather, it is designed to shine a light on a book that has been abused by people who claim to revere it but don’t read it, in the process creating misery for others. When the illiteracy of self-proclaimed Biblical literalists leads parents to banish children from their homes, when it sets neighbor against neighbor, when it engenders hate and condemnation, when it impedes science and undermines intellectual advancement, the topic has become too important for Americans to ignore, whether they are deeply devout or tepidly faithful, believers or atheists.

This examination—based in large part on the works of scores of theologians and scholars, some of which dates back centuries—is a review of the Bible’s history and a recounting of its words. It is only through accepting where the Bible comes from— and who put it together—that anyone can comprehend what history’s most important book says and, just as important, what it does not say.

Later in the article, Eichenwald writes:

“These manuscripts were originally written in Koiné, or ‘common’ Greek, and not all of the amateur copyists spoke the language or were even fully literate. Some copied the script without understanding the words. And Koiné was written in what is known as scriptio continua—meaning no spaces between words and no punctuation. So, a sentence like weshouldgoeatmom could be interpreted as ‘We should go eat, Mom,’ or ‘We should go eat Mom.’ Sentences can have different meaning depending on where the spaces are placed.For example,godisnowhere could be ‘God is now here’ or ‘God is nowhere.’”

If you are interested in reading all of Mohler’s objections, you can read them here.

Mohler concludes his article by saying:

But Kurt Eichenwald’s essay is not ground-breaking in any sense. These arguments have been around for centuries in some form. He mixes serious points of argument with caricatures and cartoons and he does exactly what he accuses Christians of doing — he picks his “facts” and arguments for deliberate effect.

Newsweek’s cover story is exactly what happens when a writer fueled by open antipathy to evangelical Christianity tries to throw every argument he can think of against the Bible and its authority. To put the matter plainly, no honest historian would recognize the portrait of Christian history presented in this essay as accurate and no credible journalist would recognize this screed as balanced.

Oddly enough, Kurt Eichenwald’s attack on evangelical Christianity would likely be a measure more effective had he left out the personal invective that opens his essay and appears pervasively. He has an axe to grind, and grind he does.

But the authority of the Bible is not the victim of the grinding. To the contrary, this article is likely to do far more damage to Newsweek in its sad new reality. Kurt Eichenwald probably has little to lose among his friends at Vanity Fair, but this article is nothing less than an embarrassment. To take advantage of Newsweek’s title — it so misrepresents the truth, it’s a sin.

Mohler thinks Eichenwald has an axe to grind. And Mohler doesn’t? His weekly missives are one long lesson in the art of axe grinding. How about we all admit we each have axes to grind? Let’s look beyond what may be over the top characterizations by Eichenwald and deal with the one salient fact he makes clear; the Bible is a horribly misrepresented, misunderstood book. Most Christians are ignorant about the history of the Bible and its teachings. Most Christians spend very little time reading and studying the Bible. Even among Evangelicals, people who love to claim they are people of the Book,  Bible literacy and serious study of the Bible is lacking.

I suspect Mohler yearns for the day when churches, pastors, colleges, and seminaries controlled the flow of information. Before the internet, people didn’t have access to websites that dismantle, discredit, and obliterate the arguments pastors and theologians make for the Bible and its teachings. Unbelief is on the rise, the none’s continue to grow, and Bart Ehrman’s books are New York Times bestsellers. Information about the history of the Bible and its teachings can no longer be contained within the four walls of the church or seminary.

The bigger problem is that Christians, especially of the Fundamentalist and Evangelical stripe, now know that their pastor has been lying to them. Their pastor knew that the Bible is not an infallible, inerrant, or inspired book, he knew it contained errors, mistakes, and contradictions, yet he hid these things from parishioners. Conscientious Christians are right to wonder about what else their pastor isn’t telling them? Maybe it is time to check out other expressions of faith that don’t denigrate people over their gender, sexuality, or politics.

The internet will be the death of Evangelical and Fundamentalist Christianity in America. Certainly Christianity will survive, but its future form will be much different from the Bible thumping days of the19th-20th century. Evangelicalism is dying. Mohler’s own denomination, the Southern Baptist Convention (SBC), continues to lose members. Actual church attendance and baptisms are in decline and the average  congregation is filled with those over 50. On any given Sunday, over half of the people who are on the membership roll of a Southern Baptist church are nowhere to be found. (check the bed or the lake)  SBC leaders fear they are losing a whole generation of young people. Instead of looking inward for the reason this is so, they blame it on American culture, Hollywood, emergent theology, etc. They seem unable to see that the real problem is irrelevance and an inability to answer the hard questions presented by science.  Young adults continue to seek truth but they no longer look to the church for the answers.

Men like Al Mohler will continue to rage against the machine, blaming anyone and everyone but himself. At his funeral he will be eulogized as a stanch defender of the faith and the nursing home crowd in attendance will feebly say Amen.

Like everything that is of human construction, death, change, and rebirth are sure to come to American Christianity. It remains to be seen what Christianity will look like when my grandchildren are my age. That is, if the rapture hasn’t happened and carried all the real Christians® away.