Get Right With God,Consult the Bible When Making A Decision, and Keep America Communist Free,

Now that’s a headline. What follows are photographs I shot while out and about in rural NW Ohio. 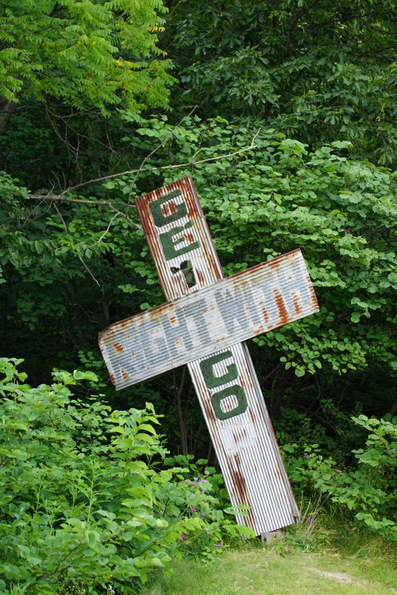 I found this sign along U.S. Hwy 127 south of Sherwood, Ohio.  Recently, the Defiance Crescent-News featured an article written by Isaiah Ross about this sign:

Along U.S. 127 and Paulding County Road 424 is a cross that simply states: “Get right with God.” Amid word that the beloved cross would be removed, the past few weeks have been filled with heated emotional debate.

The cross was to be picked up by the American Sign Museum located in Cincinnati, whose founder Tod Swormstedt said the acquisition was supposed to be a birthday surprise from his girlfriend, Nancy Herbert. Herbert’s friend Cate O’Hara was heading up to Bryan with her daughter when she noticed the sign off the side of the road. O’Hara, knowing Swormstedt’s involvement with the American Sign Museum, contacted Herbert to inform her of the cross. The surprise was reportedly ruined when Swormstedt was notified of it after a local newspaper ran a historic account of the cross last week. However, Thursday morning, he received news that the sign was no longer available for pickup.

The cross was placed there by Rev. Harrison Mayes around 1966 in his journeys throughout the country. Mayes took to working in the coal mines at a young age, and when he was a young man, an accident caused him to be trapped in a mine. He prayed and prayed to God, vowing to live the rest of his life in God’s service if he survived the predicament.

His prayers were answered. Mayes made it through to fulfill his side of the covenant, so he took to his bike and used his building skills to construct, paint, and place his signs where he saw fit.

Through the course of his life, Mayes made many signs, each of which is large enough to be easily seen and read from the road. All of them share a similar message of being prepared and getting saved. Several signs stand erect in the greater region around his home in Fork Ridge, Tenn., but they are present in 22 different states. Some are as far north as northwest Ohio, where locals have seen the Cecil area cross and one that used to be near Antwerp before an accident destroyed it. As he knew his days were coming to a close, he began writing on his signs where he wanted them placed, in hopes someone would continue the efforts of his lifelong promise…

Across the road from the Get Right With God sign I found this billboard: 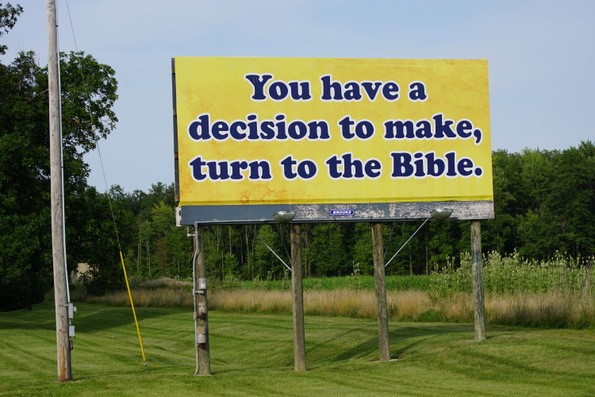 Isn’t it good to know that the Bible is a one-stop shop for all your decision-making needs. Need to decide what to make for dinner? Check the Bible? Need to know if brown shoes go with blue slacks? I’m sure that the billboard owner has a more spiritual intent in mind, something along the lines of getting saved.

Tuesday, Polly and I drove to Fort Wayne to attend the Dayton Dragons vs. Fort Wayne Tin Caps baseball game. I’ve been battling an upper respiratory infection for the past week or so, and by the time we got to the stadium I was in no shape to sit in 93 degree heat and watch a game. So we turned around and came home. Here’s a sign I photographed on a country road outside of Antwerp, Ohio. 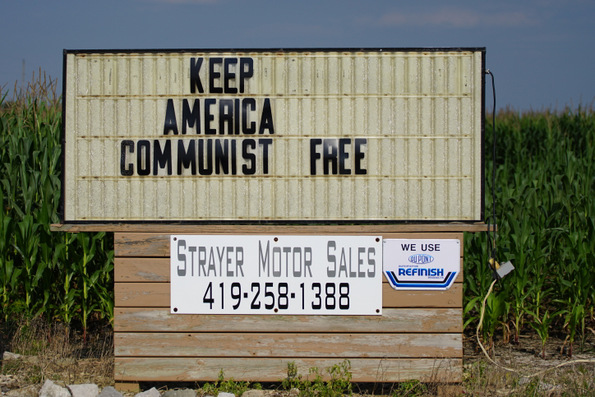 Please click the high-resolution links to see photo full size. Most photos on this site are resized to 600×400, resulting in 60-90% reduction in size. This reduction flattens and softens most photos. I hate it, I mean I really, really, really hate it, but you’d hate it even more if I uploaded all my photos as shot and it took 5 minutes for the site to load. If you would like to save, print, or use one of my photos, please use the high-resolution photos. Any noncommercial use is permitted.

Letter to the Editor of the Defiance Crescent-News. Published June 27, 2010.

There are many important battles that loom on the horizon. While the election of Barack Obama dealt the political and religious right a severe blow, they have not been defeated. Theocrats, determined to make the Christian religion the official state religion, continue to argue for the enshrinement of the Christian God’s law as the law of the land. They continue to press for a revisionist history that paints our founding fathers as evangelicals and our nation as a Christian nation. The religious right continues to target local schools as a prime target for cultural change. Abstinence-only education, school prayer, Christian nationalism and intelligent design (which is nothing more than creationism in new clothes) are all points of attack that must be met head-on by those of us who are secularists. We cannot afford to give any ground to attempts to Christianize our schools and government.

Here in northwest Ohio we have become too complacent as right-wing religion (often joined at the hip with right-wing politics) pushes itself into every aspect of our daily life. A recent event is a case in point. The Bryan Jubilee was held recently. Thursday night was advertised as Christian Fun Night. The Jubilee is a public event. As such, there should be no exclusionary events. I wonder if the organizers of the Jubilee would allow the atheists, agnostics and deists of Williams County to have their own fun night, especially if that fun included acts that made light of the Evangelical Christian faith. I seriously doubt it. I want to encourage my fellow secularists and humanists to come out of the shadows and help stymie the continued encroachment of Evangelical Christianity into our schools and government. I realize our numbers are few, but we can make a difference if we are willing to speak out.