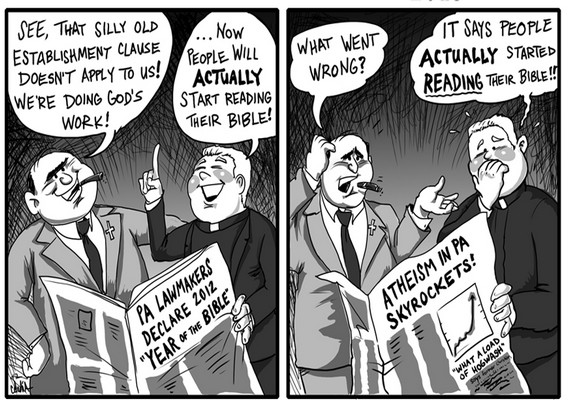 Bo Wagner, pastor of Cornerstone Baptist Church, Mooresboro, North Carolina, thinks the world would be a great place if everyone would just read the Bible and put it into practice:

The guidance found in the Bible does not work. Not because it is flawed, but because it is no longer even known. Society seems to have latched on to exactly two words from the Bible — “judge not” — and appears fairly oblivious to everything else within its pages.

That is a shame, because the counsel of Scripture actually does work when it is known and applied. And that brings my mind to an intriguing question: What if everyone knew about and applied the actual words of Scripture?

What if, for instance, every time someone is offended over a flag or a symbol or a mascot or some unintentional slight, we taught and applied the words of Psalm 119: 165: “Great peace have they which love thy law: and nothing shall offend them.” Can you imagine the blessing of a society that is no longer professionally offended at almost everything?

What if each and every time a white who is racist against blacks or a black who is racist against whites had people of their own color quoting the words of Acts 10:34-35 to them: “God is no respecter of persons: but in every nation he that feareth him, and worketh righteousness, is accepted with him.” Can you imagine how quickly racism would go away if people used the words of Scripture to confront racists of their own color?

What if nations, especially ours, were forced to live within their means by a country full of people demanding adherence to sound scriptural principles of money management, such as having to live on a budget rather than on credit? Jesus said in Luke 14:28-30: “For which of you, intending to build a tower, sitteth not down first, and counteth the cost, whether he have sufficient to finish it? Lest haply, after he hath laid the foundation, and is not able to finish it, all that behold it begin to mock him, Saying, This man began to build, and was not able to finish.”

If people of every creed and color and political party refused to ever elect anyone who ran a nation on credit, imagine the fiscally sound country we would have to leave our children and grandchildren.

What if every preacher suddenly remembered that one of his jobs is to do as God commanded Isaiah in Isaiah 58:1: “Cry aloud, spare not, lift up thy voice like a trumpet, and shew my people their transgression, and the house of Jacob their sins.”

Every preacher in the Bible, Old or New Testament, Jesus included, preached against sin. Jesus told a woman involved in sexual sin to “sin no more.” Imagine how clean and right our society could be if preachers stopped behaving as celebrities and instead started crying aloud against sin again.

What if every Christian started obeying Psalm 101:3: “I will set no wicked thing before mine eyes: I hate the work of them that turn aside; it shall not cleave to me.” What if they turned off every filthy commercial and refused to shop at business who use them? What if they ceased to look at any form of pornography? What if they refused to allow impurity in their hearts through the eye gate? How much more power of God would be upon us.

And what if every Christian started living as if he believes that Jesus actually could come back today? He told us in John 14:3: “And if I go and prepare a place for you, I will come again, and receive you unto myself; that where I am, there ye may be also.” How “Christ-like” would Christians actually be if they lived every day with the realization that it could be today?…

Wagner, a professor at Carolina Bible College, an unaccredited King James-only institution, thinks the Bible is the cure for what ails us. If we would just start reading and obeying the King James Bible, all would be well. Wagner thinks the controversy over racist mascots, the confederate flag, and the Black Lives Matter campaign could easily be solved if those who are offended would just stop being offended. In other words, let the racists do what they want. Wagner thinks that if more preachers preached against sin, there would be less sin. How’s that working out? In uncounted Baptist churches known for their stand against sin, accusations of sexual misconduct, theft, and child molestation have been levied against pastors, choir leaders, deacons, Sunday school teachers, and everyday, run-of-the-mill Christians. It seems that the word of God provides no inoculation from sin. If Christians can’t/won’t live by the teachings of the Bible, why should the rest of us?

I seriously doubt Wagner wants non-Christians to just pick up the Bible and start reading it. Doing so would likely lead people to believe things that Wagner and his fellow Evangelicals consider heretical or sinful. Incest, rape, polygamy, murder, genocide, and slavery, to name a few, find support in the book Wagner wants everyone to read. I suspect what he really means is that he wants everyone to read the Bible through his Evangelical interpretive grid. Just reading the Bible without wearing Wagner Interpretive Glasses®  is not advised.

I actually agree with Wagner. I wish EVERY Christian would take the time to read the Bible from cover to cover. With a skeptical, critical eye, every Christian should read every word in the Good Book. Don’t ask a religious leader to guide you. Just read it. Don’t try to parse it though a particular sect’s interpretive lens. Just read it. Make a list of the things you didn’t know were in the Bible. Make a list of things that don’t make sense or offend your moral sensibilities. When finished, take your double-sided ten-page list to your pastor and ask him to answer your questions. Tell him you want answers, not faith.

Carolina Bible College is affiliated with Macedonia Baptist College (link no longer active) and Bright Light Baptist Church. I found the websites for these entities not only to be poorly designed, but quite confusing. While Carolina Bible College does offer a handful of on-site classes, everything else is done through correspondence and online.  Undergraduate work is $15 a credit hour, postgraduate work is $30. The school offers up to 64 credit hours for life experience. The fee for life experience is $7.50 per credit. You can find the college’s handbook/catalog here (link no longer active).

We Need to Care About Africa

Letter to the Editor of the Defiance Crescent-News, published January 12, 2008.

Kenya is burning and the American government fiddles while it does. Kenyan Christians flee to a church for safety and are burned alive by Muslim extremists. Hundreds have been killed and thousands are fleeing for their lives. The government is in total collapse and the economy is being destroyed by rampant hyper-inflation.

One recent missionary letter I read reported gasoline selling for $20 a gallon. Kenya is another Rwanda or Sudan in the making. This is yet another chapter in a sordid African tale in which millions are dying or maimed and entire countries are destroyed. What is constant in this story is, for the most part, the American government and the Christian church stand by and do nothing.

Oh, we may throw some money at the problem, utter meaningless words like “genocide” and mutter some general non-effacious prayers, but for the most part, Americans don’t care. Why is this?

I believe there are two basic reasons why Americans have little care or concern for the slaughter going in Africa. First, most Africans are black. I guarantee you that if 50 white European Christians were burned alive in a church by Muslim extremists, there would be outrage in America. There is a deep-seated racism in America towards black people. It is so deeply rooted many people are unaware of it. One could almost excuse it, but in the case of Kenya, Rwanda and Sudan, it has cost millions of people their lives.

Second, most Africans are poor. They live on a few dollars a day. They offer little of value to the world. They live lives of subsistence and most die leaving few, if any, material goods behind. They are but a blip on the screen of the American economy. While some oil production does come from Africa, it is not a major player in the oil market.

A whole country is being ravaged and slaughtered by war and disease. Almost half of the population in Swaziland is infected with AIDS. Thousands of children die from malnutrition every day. Thousands more are orphaned.

It is immoral for us to sit by and do nothing. I want to appeal to my fellow Christians to insist that their churches and pastors pray for, and actively get involved in, ending the carnage and suffering in Africa.

Write letters to government leaders pleading for action in Africa. Find humanitarian groups that are working on the ground in Africa and support them with your money. Educate your children about Africa and, most of all, search your heart for latent racism that may keep you from seeing black Africans for who they are — precious children of God.