Selflessness: Are Atheists Only Concerned with Themselves?

Here’s a graphic one of my son’s sent me from their Facebook news feed: 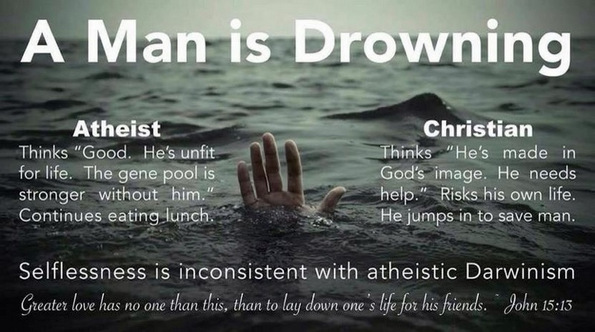 As they read this, thousands of atheists hit head on table and mutter, really, this old canard? Let me kill this thinking in one, swift easy statement.  If selflessness is consistent with Evangelical Christianity, why are so many Christians selfish? Bam! Shut the door!

If the question is, can the morality taught in the Bible lead to a life if selflessness, then the answer is yes. But, the same could be said for humanism and other ethical and religious systems of belief. Christianity has no corner on the selflessness market. If anything, American Evangelical behavior often reveals a crass indifference to the plight and suffering of others. The Republican clown bus is rapidly filling up with men and women who want to be President in 2016. All of them profess to be a Christian, yet their policies are in direct contradiction to the teachings of Jesus and the Bible. Only one candidate for President, Bernie Williams, has dared to challenge the American capitalistic system, which is, by design, a heartless, selfish system of economics. Again, I am having a hard time seeing the Christianity selflessness connection.

Many Evangelicals wrongly think that atheism is a moral and ethical system of thought. It’s not. Atheism is, and will always remain the disbelief or lack of belief in the existence of God or gods. That’s it. Me telling someone I am an atheist tells them nothing about my morals or ethics. The fact that I think evolution best explains the natural world says nothing about my morality or ethics. Evolution is a statement of fact. There are Christians who are evolutionists. A conundrum…Christian=selfless Evolutionist=selfishness. Just another two-cent reason why the whole Christians are selfless argument is groundless.

As a humanist, I live my life according to the principles of humanism. These principles are succinctly stated in the Humanist Manifesto III:

Humanism is a progressive philosophy of life that, without supernaturalism, affirms our ability and responsibility to lead ethical lives of personal fulfillment that aspire to the greater good of humanity.

The lifestance of Humanism—guided by reason, inspired by compassion, and informed by experience—encourages us to live life well and fully. It evolved through the ages and continues to develop through the efforts of thoughtful people who recognize that values and ideals, however carefully wrought, are subject to change as our knowledge and understandings advance.

This document is part of an ongoing effort to manifest in clear and positive terms the conceptual boundaries of Humanism, not what we must believe but a consensus of what we do believe. It is in this sense that we affirm the following:

Humanists are concerned for the well being of all, are committed to diversity, and respect those of differing yet humane views. We work to uphold the equal enjoyment of human rights and civil liberties in an open, secular society and maintain it is a civic duty to participate in the democratic process and a planetary duty to protect nature’s integrity, diversity, and beauty in a secure, sustainable manner.

Thus engaged in the flow of life, we aspire to this vision with the informed conviction that humanity has the ability to progress toward its highest ideals. The responsibility for our lives and the kind of world in which we live is ours and ours alone.

As I try to live by the humanist ideal, I am ever aware of how far from the ideal I am. I would never say to anyone that unless they become a humanist they have no capacity for selflessness. Humans are social creatures who thrive in interdependent relationships. Rare is the person who wants solitude and loneliness. Thousands of people read this blog because they want the sense of community and connections that comes from doing do. Facebook is a hit because we desire to connect with like-minded people. We want to belong. As part of a tribe or group, we help those we have a connection with. If I had a serious medical need and required $10,000 to save my life, I know that a mere mention of this by my fellow bloggers and Facebook friends would result in the need being met. Why would people who have never met me face to face selflessly help me? It is our humanness and the bond we have with one another that drives us to selflessly help others. Are we always selfless? Of course not. All of us, Christian or not, can be a selfish asshole, thinking only of what’s best for ourselves. But, more often than not, atheist, humanist, Christian, Jew, Muslim, Hindi, pagan, or Buddhist, when called upon, will selflessly help others.

Years ago, I was at Sam’s Club checking out and in the line next to me was an Asian young man trying to buy some stuff for his Mom’s restaurant. The cashier wouldn’t let the man make a purchase because he was using his Mom’s membership card. The man spoke with broken English and was thoroughly embarrassed by how the cashier was treating him. I left my line and went over the cashier and gave her a piece of my mind. And then I told her to put his stuff on my card and he could pay me for it. Now she was the one thoroughly embarrassed, having been called out for her ill-treatment of the Asian man. She quickly corrected course and took care of the man’s order. As he left, he looked to me and said thanks. I said, no problem. Did I do what I did because I was a Christian? Of course not. I have no tolerance for those who berate and belittle others. In other words, I don’t like assholes and that’s why I came to the man’s defense.

When I come in contact with others, I do my best to be kind and considerate. A year or so ago, I had a meltdown at the local Meijer customer service desk. The young woman running the desk didn’t help me as I thought she should in the time I had allotted for her to do so. I told her, forget it, and walked away.  Everything was fine until I swiftly turned around and went back to the desk and shouted, and you don’t give a SHIT do you! Polly helplessly stood by while I made a public spectacle of myself. She didn’t say a word, but by the time we were half way home I realized that I had acted like a first class asshole. As soon as I got home I called the customer service desk and talked to the young woman who had been the subject of my anger. I apologized for my behavior. Several times she told me, that’s OK. I told her, no it’s not. No one should treat someone like I treated you. The next time I was at the store she let me know that she appreciated me apologizing.  She told me that she had never had a customer apologize for treating her like shit.

You see, I am a saint and a sinner. I can act selflessly and I can act selfishly. No one has the selfless market cornered. Take the drowning story in the graphic above.  Does any Christian REALLY believe that an atheist would idly sit by and so nothing while someone drowns? I am a cripple. Anyone who sees me knows I have problems getting around. I have had uncounted people extend kindness and courtesy to me as I try to navigate a store, stadium, or restaurant. Yes, I have met a few selfish people who wouldn’t offer me help if my life depended on it, but they are the exception to the rule. Even when I complain about how people often ignore someone in a wheelchair, I don’t think they are being selfish as much as lacking in instruction about people with disabilities.

The underlying issue is that many Christians, particularly Evangelicals, believe that morality comes from God and that without God a person cannot act morally and ethically. When challenged with examples of godless people who act morally and ethically, Christians often attack the motive for the godless person’s good behavior. The atheist is acting selflessly because they have an ulterior motive, they say. How can they know this? Can we really know the motives of others? Besides, isn’t the moral and ethical behavior of the Christian predicated on gaining a divine payoff, a mansion in heaven and eternal life? Whose the selfish person now?

As a humanist, I am deeply interested in seeing my progeny thrive. Because I love them and desire their company, I try to protect them from injury and harm. Because I desire to live in peace and harmony, I do my best to be a selfless member of the human race and the community I live in.  I don’t need the threat of hell and judgment or the promise of heaven and eternal life to motivate me to act according to the humanist ideal. My country, community, tribe, and family are important to me and because they are I act accordingly. Why is that so many Evangelicals fail to understand this? Why do they arrogantly think that morality, ethics, and selflessness are the domain of their religion alone? Why are they deliberately blind to overwhelming evidence that suggests that every person has within themselves the power to act morally, ethically, and selflessly?

Perhaps it is selfishness that drives their blindness? Imagine what would happen if people realized that living a moral,ethical, and selfless life does not require Christianity. Once the threat of hell and the promise of heaven is removed from the equation, people are less likely to join up with fundamentalist religious sects. Instead of looking for the one road that leads to heaven, they could choose one of the many road that lead to a virtuous, well-lived life. Imagine people doing good and acting selflessly because it is the right thing to do, not because they fear God or covetously desire a divine payoff after death.