Shelton Smith, An IFB Preacher Who Ignores His Neighbor and Tweets About It

Shelton Smith, the editor of the Independent Fundamentalist Baptist (IFB) paper, Sword of the Lord, sent out a tweet that said:

all thought Smith’s tweet was so wonderful that they made it a favorite.

I have a modern-day story for Shelton Smith and his merry band of let ’em starve, but make sure they pray the sinner’s prayer preachers. Maybe they will recognize what book the story is from:

But he, willing to justify himself, said unto Jesus, And who is my neighbour?

And Jesus answering said, A certain man went down from Murfreesboro to Nashville and rummaged in dumpster to find a morsel of food to eat.

And by chance there came down Shelton Smith that way: and when he saw him, he sent out a tweet to his peeps, not bothering to stop, lend a hand, or buy him a meal.

And likewise another IFB pastor, when he was at the place, came and looked upon him, and said “is there not a rescue mission this man can go to?”

But a liberal Methodist, as he journeyed, came where the hungry man was: and when he saw him, he had compassion on him. And went to him, bought him a meal, brought him to a Motel Six, and took care of him.

And on the next day when he departed, he took out $100.00 and gave it to the motel owner, and said unto him, Take care of him; and whatsoever thou spendest more, when I come again, I will repay thee.

Which now of these three, thinkest thou, was neighbour unto him that had fallen on hard times? 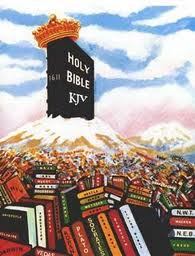 his Book that I have in my hands, I read each day. When I stand to preach, I preach this Book – this is the Bible!

It is the Word of God. It is a Book so spe­cial that we treat it with the utmost respect. We hold it dear and precious to our hearts.

It is not a Book like any other books which men have written. This Book came to us in a unique way. God Himself gave it to us. When I read its message, it is not the mere musings of a sage, a prophet or an apostle. It is instead the revealed Word of God.

It [the Bible] is not the words of men but the Word of the Almighty God, who is the Creator of the world. The human penmen were employed of God to write His very words.

When we say it was given by inspira­tion of God, we mean that God Himself gave us His own words. That is why we use the terms verbal and plenary to describe what it is. Verbal has to do with His actual words. It is not just His ideas or concepts, but His words. When we say plenary, we mean inspired fully. It is not somewhat of God with the rest of it being man-made. It is in every sense a God-made Book.

What is your problem? Why do you feel the necessity to dismember, dissect and dilute the text? Why can you not just say, “My Bible is the Word of God; I believe it, I trust it and I honor it to the fullest?”

What Is It That God Preserved? It is His Word, nothing more and noth­ing less! Remember Psalm 12:6-7 says, “The words of the LORD are pure words: as silver tried in a furnace of earth, puri­fied seven times. Thou shalt keep them, O LORD, thou shall preserve them from this generation for ever.”

Is the King James Text Reliable and Trustworthy? It is indeed! About your King James Bible you can say it is authentic, accurate and authoritative. It is God’s Word preserved for us in English. It is true and trustworthy. The inspired text has been preserved for us; therefore, it is inerrant and infallible.

— Shelton Smith, Independent Baptist, Why I Only Use The King James Bible

Smith is the editor of the Sword of the Lord — an IFB newspaper.

The late John R. Rice, editor of the Independent Fundamentalist Baptist (IFB) newspaper titled The Sword of Lord, is revered as a demigod by IFB preachers and churches.  Rice and a cadre of Sword of the Lord affiliated preachers would travel across the country holding pastor’s conferences. These conferences were used to inspire the troops to do big things for God — build big churches, win lots of souls, and collect large amounts of money. In the 1970s and 1980s, many of the largest churches in America were IFB congregations. Rice’s newspaper and publications were widely read by IFB preachers and their congregations. Rice’s Puritanical, Fundamentalist view of the world made a huge impact on several generations of Christians.

An Independent Christian Publication, Standing for the Verbal Inspiration of the Bible, the Deity of Christ, His Blood Atonement, Salvation by Faith, New Testament Soul Winning and the Premillennial Return of Christ; Opposing Modernism (Liberalism), Worldliness and Formalism.

Is All Forgiven for David Hyles?

David Hyles is the son of the late Jack Hyles, pastor of First Baptist Church of Hammond, Indiana for many years. During his younger years, David Hyles was the youth pastor at First Baptist. While there, he sexually preyed on women, resulting in his father quietly, in the dead of night, shipping him off to pastor an Independent Fundamentalist Baptist (IFB) Church that knew nothing of David’s philandering. As sexual predators are wont to do, David Hyles continued his whoring ways, leading to his expulsion from the church. If you are not familiar with the David and Jack Hyles story, please read:

In recent years, David Hyles has been showing up at IFB churches and events, acting as if what happened in the past is ancient history and no longer relevant. Praise Jesus! He has been forgiven! It’s time for people such as myself to move on and give the guy a break. Yes, he was a serial adulterer. Yes, he preyed on women. Yes, he was a despicable human being. But, “Brother Dave’ has played his “washed-by-the-blood, get-out-of-jail-free card. As far as he is concerned, his sin account has been settled and he is free to move forward in the fullness and wonder of God’s mercy and grace. Never mind the fact that Hyles has NEVER given a public accounting of his very public misconduct, and as far as I know he has not contacted nor made restitution to the countless people he has harmed. Doing so, of course, would require him to admit actions that still could be criminally prosecuted.

According to a comment of the Fighting Fundamental Forums — Hyles-Anderson College forum, David Hyles and his family were in attendance at the July 24-27, 2017 National Sword of the Lord Conference. This annual gathering of IFB preachers and congregants is held at Gospel Light Baptist Church in Walkertown, North Carolina. Bobby Roberson is the pastor of Gospel Light — one of the larger IFB churches in the country. The Sword of the Lord Conference is put on by Shelton Smith, the editor of the Sword of the Lord. This year’s conference speakers included: Mike Allison, Joe Arthur, Max Barton, Norris Belcher, Justin Cooper, Jeff Fugate, John Hamblin, Richard Harper, Jon Jenkins, Lou Rossi, Jim Townsley, and Mike Wells. (Most of the speakers use the Dr. before their names. Please read IFB Doctorates: Doctor, Doctor, Doctor, Everyone’s a Doctor)

David Hyles was, as the following comment shows, in attendance at least one of the conference days. A Fighting Fundamental Forums commenter using the moniker Twisted posted a comment a friend of his made on Facebook:

While on a trip in North Carolina with one of our church men, we attended three evening services of the annual National Sword of the Lord Conference on Revival and Soul-Winning. One of the pleasures for me at the conference was to get to see Brother David Hyles, who has been a good friend and encouragement on Facebook. His dad, Jack Hyles, was my favorite preacher. Brother David’s wife, Brenda, took this photo. I thought she did a great job considering the subject matter.

After a period of waywardness, Brother Hyles (David) appears to have been on the right track again for some years now, and he has been trying to use his own restoration to encourage others who need the same. I count him as a friend! For any of you who might have a problem with that, I want to remind you that he is no longer out in a far country nor in the field feeding swine, but he is back at the Father’s house. Stay outside and pout if you want to, or you can come in and enjoy the Father’s celebration of restored fellowship!

Sorry, but I want to puke. According to the aforementioned Facebook friend, it’s time for people to forgive Hyles and move one. First, I have no need to forgive David Hyles. He never did anything to me, so there is nothing for him to apologize for — not that there is any evidence that Hyles (like his father) has apologized to anyone. My goal is to hold a man who was considered one of the “greatest men on earth” accountable for his abuse of countless trusting Christian women. Until Hyles gives a public accounting of his past actions and makes appropriate restitution, I intend to continue to smack him over the head every time I hear of him sticking his bald pate out of the hole he crawled into.