Last week, I asked for prayer on my Facebook page because I was covered with hives – very itchy hives. I just realized that one of my friends had written to me and I opened it yesterday. I was so shocked when I read her message. She gave me permission to place the message here:

Hi Geri, I don’t suspect by your post that you’re vaccinated, and I’m not either. I’m messaging you, because I wanted you to know my experience with a miserable rash I’ve had. I get it whenever I get near a “vaccinated” person, and it seems more so with the Moderno jab. I break out a couple days after being in close contact with a jabbed person in the most intense itch that I’ve ever had in my life.

I have had poison ivy/poison oak from head to toe, where the doctor said it was the worst case he ever saw, so when I say this was worse, it was..the itch starts in my hands, and feet, and then spreads everywhere , it’s so intense that I feel like I’m going to lose my mind, and then a few days later it turns into a rash of blister type almost hives all over. I scratch so bad that I end up bleeding. Nothing was helping! I tried everything I could think of. I was terrified to go to the doctor, because I knew they were all jabbed, so I put a post out about it in a group, and a naturopath type doctor in there told me to make Pineneedle tea.

She said she’s been seeing a lot of cases the same as mine, even her own sister. Thank God in New Hampshire white pine is the state tree, I think. I don’t know for sure, I should check, but we have them everywhere, and we also have a Concolor pine tree that my daughter and son-in-law bought us for Christmas a couple years ago, it’s still on the small side but it smells and taste like oranges.

After about 3 cups of pine needle tea, my itch was 50% better, by the next day, 75% and got better from there. I’m good if I keep drinking it before I go out, and after I get home. If I don’t drink the Pineneedle tea then it will come back, the itch is not as intense as it was at first before I knew about the tea, but it will come back unless I do the tea before, and after. So I just wanted you to know that in case this is the reason for your rash. Hope if it is it helps.

And the [sic] I forgot to tell you, but my brother and son also get the itch and rash, only not as severe as I was. My daughter had a rash but no itch after doing a craft fair and being in close contact with jabbed people. God Bless!

I did have a video appointment with my doctor and he gave me prednisone which I really do not like to take. He also gave me a script for a medicine for itching. I am praying that the pine needle tea works for me AND that if there are readers going through the same thing, they will benefit from this information.

— Geri Ungurean, Absolute Truth From the Word of God: Jesus Has Every Answer, ITCHY HIVES After Being Close to Vaxxed Person: Then a Friend Sends me a Surprising Message Which Confirmed my Suspicion, October 13, 2021

Today’s Sound of Fundamentalism is a video clip of IFB evangelist and pastor Phil Kidd telling a church congregation that vaccinations turn boys into emasculated, crossdressing homosexuals. Kidd is the pastor of Emmaus Baptist Church in Kingsport, Tennessee.

Quote of the Day: Science Literacy is the Cure for the Recent Measles Outbreak 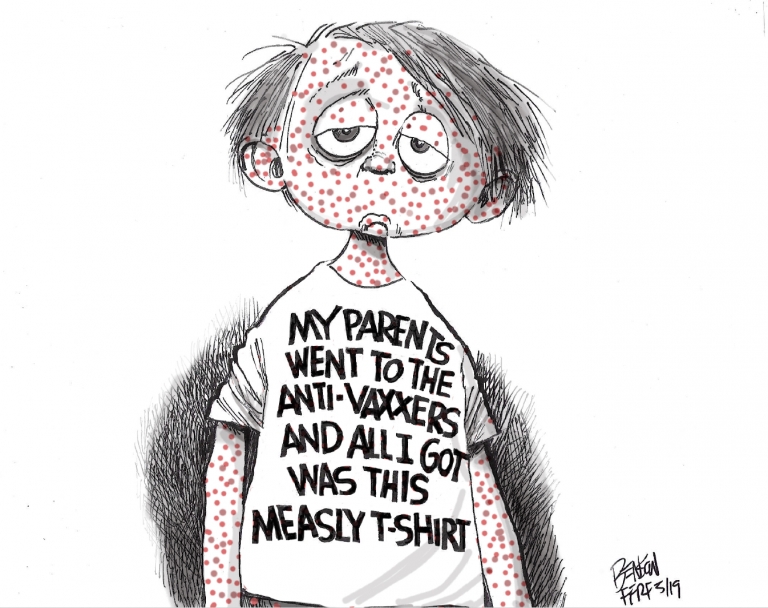 While the measles outbreak in Brooklyn is the worst in decades, it’s only the latest in a long line of crises that can be traced to a lack of science literacy and quality education.

Our public health and children’s lives are at risk because so many parents, community leaders and policymakers lack the science literacy and critical-thinking skills to decipher fact from fiction.

This widespread dismissal of science is a pandemic, and with each new crisis, it becomes clearer that we are treating the symptoms instead of the underlying disease. From vaccine skepticism to climate-change denial, ignoring proven science could have life-threatening or even catastrophic results.

We must address the root cause and support and invest in STEM education and public science literacy before the damage is irreversible. The health and safety of our communities and future generations depend on it.

— Maya Ajmera, president and chief executive of the Society for Science & the Public and the publisher of Science News, New York Times

Please read an excellent article on the subject by Annie Laurie Gaylor titled, Is it a Measles Pandemic or is it Really a Crisis in Critical Thinking Skills?