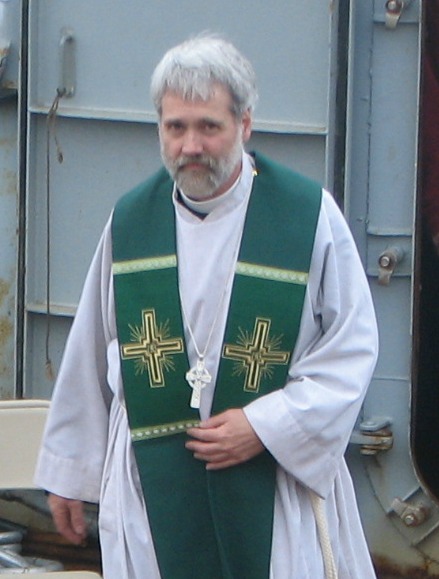 Wayne Buchanan, pastor of Tremont Congregational Church in Bass Harbor, Maine and St. Brendan’s Anglican Mission, pleaded guilty last Friday to “one count of possessing sexually explicit material of a minor under the age of 12.”

The former pastor of a Tremont church will serve a suspended sentence and probation after pleading guilty to a child pornography charge Friday in Hancock County Unified Criminal Court.

Wayne Buchanan, 63, of Southwest Harbor pleaded guilty to one count of possessing sexually explicit material of a minor under the age of 12, a Class C felony level crime.

Buchanan was sentenced to a suspended one-year prison term and to two years probation with conditions that include no unsupervised contact with children under the age of 12. He also is required to register with the Maine Sex Offender Registry.

Justice Patrick Larson noted that the sentence was the result of a negotiated plea between the defendant and prosecutors. Buchanan, who will serve no time behind bars if he complies with his conditions, faced up to five years in prison and up to a $2,000 fine.

The prosecuting attorney, Assistant District Attorney Toff Toffolon, told the court that there is no evidence that Buchanan disseminated child pornography or that he had any sexual contact with minors. Since being charged, Buchanan has “engaged in extraordinary rehabilitation efforts,” Toffolon said.

Buchanan’s attorney, Richard Hartley, told the court that “a lot of work” went into the case.

“What sets this apart is what my client has done since,” Hartley said. “It really is exceptional.”

According to Hartley, Buchanan sought counseling to deal with “what has been a long-recognized condition” and has gone as far as to start “a sex offenders anonymous program here in Ellsworth.”

Buchanan resigned as pastor of the Tremont Congregational Church and St. Brendan’s Anglican Mission on Jan. 7, 2016, the day after state police executed the search warrant.

Buchanan…. has been “removed from his holy orders in the Anglican Church by action of the bishop according to the canons of the church and no longer is a member of the Anglican clergy.”

Buchanan, according to published reports, was active in boy scouting and at one time was president of the Katahdin Area Council of the Boy Scouts of America.

The former pastor of a Tremont church held up as an example of rehabilitation at his sentencing last month for possession of child pornography was arrested Sept. 7 for violating his probation.

Wayne Buchanan, 63, of Southwest Harbor allegedly violated his probation by using his computer to access websites and perform internet searches that are prohibited by his court-ordered conditions, according the Hancock County District Attorney Matthew Foster.

Buchanan, the former pastor of the Tremont Congregational Church and St. Brendan’s Anglican Mission, pleaded guilty Aug. 25 in Hancock County Unified Criminal Court to one count of possessing sexually explicit material of a minor under the age of 12, a Class C felony level crime. That same day, he was sentenced to a suspended one-year prison term and to two years probation with conditions that include no unsupervised contact with children under the age of 12. He also is required to register with the Maine Sex Offender Registry.

Buchanan was released from the Hancock County Jail on Friday, after posting $5,000 bail.

According to Foster, one of the search terms used by Buchanan was “rubbin butts,” which the Southwest Harbor man claimed was a search for a brand of barbecue sauce. While there is an actual brand by that name, “law enforcement feels that explanation is somewhat convenient,” the district attorney wrote in an email.

Buchanan’s probation conditions allow him to use the internet only as part of his sex offender treatment, Foster said.

The sentence handed down in August was the result of a plea agreement between the defendant and prosecutors. Buchanan faced up to five years in prison.

At the time, Assistant District Attorney Toff Toffolon told the court that Buchanan had “engaged in extraordinary rehabilitation efforts.”

Buchanan’s attorney, Richard Hartley, said the work his client had done “is exceptional.” Buchanan sought counseling to deal with “what has been a long-recognized condition” and had gone as far as to start “a sex offenders anonymous program here in Ellsworth,” Hartley said.

By violating his probation, Buchanan could be ordered to serve his one-year prison sentence. That will be determined at a hearing, which Foster said is scheduled for Oct. 13.

A judge last week denied a motion to revoke the probation of a Southwest Harbor man convicted of possessing child pornography but did approve stricter conditions regarding his sex offender treatment program.

Wayne Buchanan, 63, was in Hancock County Unified Criminal Court Friday for a hearing to revoke his probation and to amend the conditions of his probation.

In court last week, Buchanan’s former probation officer, Kurt Dyer, testified he had the former pastor arrested on the probation violation charge after receiving notification from monitoring software that Buchanan’s computer was used to access Facebook accounts, Amazon, YouTube, a drop box and other sites.

“His probation conditions state he can only access a computer for treatment purposes,” Dyer said, explaining that he could see no therapeutic reasons to visit Facebook and other websites.

Buchanan’s attorney, Richard Hartley, asserted it was Buchanan’s wife, Nola Buchanan, who had used the family’s sole computer, a laptop, for the searches and accused Dyer of not following up on the Southwest Harbor man’s claim of that being the case.

Nola Buchanan also took the witness stand, testifying that she had used the computer on the family’s visit to New Hampshire, visiting the sites along with her daughter. “Rubbin Butts,” she said, is a barbecue restaurant in New Hampshire.

Nola Buchanan said her husband has never had a Facebook page and the drop box is used by him for his therapy.

Deputy District Attorney Toff Toffolon suggested Nola Buchanan was covering for her husband, saying she faced no legal jeopardy for not telling the truth.

“But you certainly see a legal downside as to why your husband is here today,” Toffolon continued.

The deputy district attorney also challenged her reason for not contacting Buchanan’s probation officer after he was arrested to explain the circumstances of their computer use.

“I never thought I had access to Wayne’s probation officer,” she said.

Toffolon said the state had never accused Buchanan of accessing pornographic sites at the time of his arrest.

Justice Pat Larson denied the motion for revoking Buchanan’s probation but the state was successful in having his conditions amended regarding treatment.

According to Toffolon, Buchanan is under the care of Harl Hargett of Alpha Forensic Psychological Services LLC of Lakewood, Colo.

Hargett’s website states that, along with treatment in his office, he offers therapy by Google hangouts, Skype and telephone. He claims to be certified as a sex addiction therapist, sex therapist and a substance abuse professional.

Buchanan’s current probation officer, Timothy Quinn, told the court that Buchanan’s therapy with Hargett was not what was required by the state for sex offenders. Quinn, a sex offender specialist with the Maine Department of Corrections, took over for Dyer after Buchanan was assessed to be a high risk for reoffending, according to testimony.

Quinn said Buchanan should be undergoing sex offender therapy, not sex addiction therapy. The two types of therapy are quite different, he said. With a state-certified sex offender counselor, a probation officer is able to monitor an offender’s treatment, he said.

Hartley argued that the plea agreement between the district attorney’s office and Buchanan included information on what counseling his client was to receive.

Toffolon pointed out that, at the time, prosecutors were unaware that Buchanan was a high-risk offender.