The Sounds of Fundamentalism: Women Don’t Need Any Rights by Steven Anderson 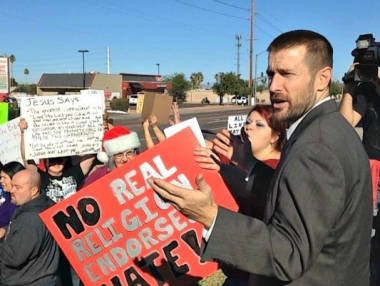 This is the eighty-fourth installment in The Sounds of Fundamentalism series. This is a series that I would like readers to help me with. If you know of a video clip that shows the crazy, cantankerous, or contradictory side of Evangelical Christianity, please send me an email with the name or link to the video. Please do not leave suggestions in the comment section.  Let’s have some fun!

Today’s Sound of Fundamentalism is a video clip of sermon preached by Steven Anderson, pastor of Faithful Word Baptist Church in Tempe, Arizona. Those uninitiated into Independent Fundamentalist Baptist (IFB) thinking will likely think Anderson is insane. He is, but his view of women is quite common among churches and pastors who proudly claim the IFB moniker.

Shacking Up: Most Americans Approve of Cohabitation

According to a June 2016 Barna Group study, two-thirds of Americans believe it is okay for couples to live together without the benefit of marriage. The study found:

It comes as no surprise that Millennials — mirroring the sexual revolution of their Boomer parents — are twice as likely to approve of cohabitation than their grandparents and great-grandparents: 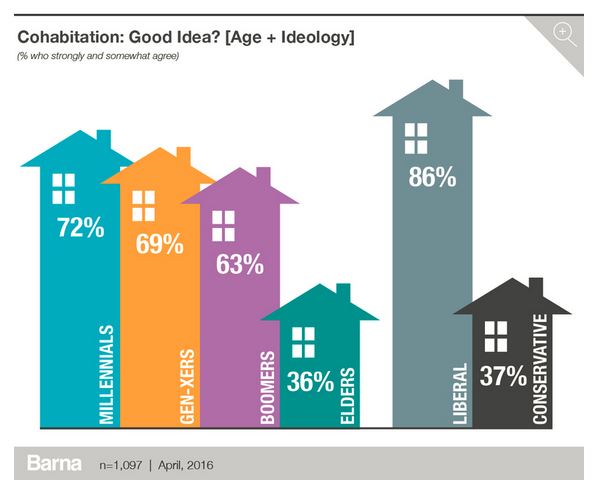 It should also come as no surprise that religion is the primary reason people disapprove of cohabitation. Barna reports:

According to Barna, 57 percent of Americans have either currently or previously lived with a boyfriend/girlfriend. Again, those who are religious are less likely to shack up, but even here, a large number of Christians choose to “try the car before buying it.”

“America is well beyond the tipping point when it comes to cohabitation,” says Roxanne Stone, editor in chief at Barna Group. “Living together before marriage is no longer an exception, but instead has become an accepted and expected milestone of adulthood. Even a growing number of parents—nearly half of Gen-Xers and Boomers, and more than half of Millennials—want and expect their children to live with a significant other before getting married.

“The institution of marriage has undergone significant shifts in the last century,” continues Stone. “What was once seen as primarily an economic and procreational partnership, has become an exercise in finding your soulmate. Where once extended families lived within a handful of miles from each other, now the nuclear family often strikes out on its own. Such shifts placed a new emphasis on marriages as the core of family life and revealed fault lines in many marriages. These pressures, along with a number of other social phenomena—including women’s growing economic independence—led to unprecedented divorce rates in the second half of the twentieth century. As a result, many of today’s young people who are currently contemplating marriage, see it as a risky endeavor. They want to make sure they get it right and to avoid the heartbreak they witnessed in the lives of their parents or their friends’ parents. Living together has become a de facto way of testing the relationship before making a final commitment.

“However, religious leaders will be wise to notice that a growing number of their constituents—particularly in younger demographics—are accepting cohabitation as the norm,” concludes Stone. “As with premarital sex, the arguments against cohabitation will seem increasingly antiquated as the general culture accepts and promotes it. When everyone in their circles and everyone on television is living together, young people will begin to see it as benign. Religious leaders will need to promote the countercultural trend by celebrating the reasons to wait—rather than trying to find evidence for why it’s wrong (because such tangible, measurable evidence may not exist).

I suspect that most readers of this blog are not surprised by Barna’s findings. Boomers, Gen-exers, and Millennials alike have endured three generations of religious and political moralizing, all the while watching those screaming against “sin” do the very things they so strenuously oppose. Their message of do as we say not as we do now falls on deaf ears. Perhaps it is time for 2016 rewrite of God’s “timeless” moral code, one that reflects that women now have the freedom to use birth control and lustily fuck whomever, wherever, and however. Women are no longer subservient to the sexual whims of men. Sexual slavery, once the gospel of American Christianity, no longer plays well in Peoria. And this, dear readers, is the real problem, at least in the minds of conservative, Evangelical, and Fundamentalist clergy and political leaders. Women no longer need men or marriage to find fulfillment, and this scares the hell out of preachers and conservative politicians. As Barna admits, we are now well past the tipping point when it comes to cohabitation. Time will tell if Christian moralizers will finally admit this fact and choose to focus on matters of faith instead of what goes on behind closed bedroom doors.

The shaming of the fairer sex by a Christian fundamentalist is on public display at Girl Defined: Getting Back to God’s Design. Today’s shaman is Beecher Proch.  Part of a family singing group, 4 Proches, Proch has a blog and is part of Broch Productions, a Christian film company. You can also find Proch on Facebook, Twitter, and LinkedIn. He is a 2014 graduate of Pat Robertson’s Regents University and has written articles for several websites that cater to primarily a young female Evangelical Christian clientele, including Lies Young Women Believe and  A Lovely Calling.  I could find no articles by Proust on male focused sites, so it makes me wonder, with all the writing on female focused sites,  if Proch is trolling for a covered up, hot Christian woman. Or, perhaps he is, oh, I don’t dare go there.

In today’s culture modesty is totally out of style. The phrase that I’d say best describes the current trend would be “less is more – show your skin.” Skin is everywhere: billboards, magazines, social media – everyone everywhere seems to be attempting to show off as much skin as possible and draw as much attention to themselves as they can.

The American culture is constantly putting the *wrong* message into girls’ heads. “If you don’t flaunt what you’ve got, guys are going to pass you over and move on to the skin-revealing, midriff-baring, hottie.”

Right away, Proch uses the word “modesty, a word he never defines other than to suggest immodest is showing too much flesh. How much flesh showing is too much? A little leg, a little cleavage, a little shapely form?

Proch assumes to know why women dress the way they do. In his mind, any woman who exceeds his modesty standard is trying to attract attention to themselves or is out to get a man. I will leave it to the women who read this blog to educate the young, unmarried, and I assume virginal Master Proch.

Proch buys into the notion that men are visual and women are not. While men certainly demonstrate their desire through a gaze, a look, or a creepy look, women are also visually attracted to men and other women. After Polly and I deconverted, we talked about this subject many times. I wanted to know what type of men, beside the stud muffin she is married to, Polly was attracted to. At first, fearing it would offend me, she didn’t want to say. Now, she freely gives her opinion on the male form. She really liked the movie Magic Mike, a psychological  thriller about a man who does magic shows for children. I am always surprised at the type and look of men she likes. I’ll see an attractive actor on TV and I’ll ask, do you find him attractive? The man I think she will think is hot is rarely right.

Each of us process the visual world differently. Do men view the world differently from women? Sure. But, is this a genetic difference or the result of social conditioning, parental training, religious influence, education, and personal likes and dislikes? Again, I will leave it to female readers to educate Proch.

Before Proch launches into his version of slut shaming, he makes it clear that:

…men are 100% accountable for where they put their eyes, and what they do with what they see once it enters their mind…

And then he says BUT,

…But I also know this: it sure is a blessing and encouragement when a woman makes the effort to dress modestly.

In other words, if women really love and care for weak, pathetic, helpless, sex-crazed, vagina seeking Evangelical men, they will make sure they watch Little House on the Prairie and Little Women to learn how to dress.  Either that or let Proch educate them on exactly what the Bible says about modesty. According to Prouch:

Modesty is Biblical! It shows that a woman understands who she is in Christ and that she knows she’s valued by God. A woman’s body is beautiful and amazing. There’s no embarrassment in how different the shape of a woman’s body is from a man’s.

Modesty doesn’t hide the difference, it clearly acknowledges it with the correct attitude and focus on God’s creative differences in body shape. Immodesty focuses on the body with the wrong attitudes of lust, pride, and self-focus.

Proch demands that Evangelical women and women everywhere adhere to his understanding of modesty. He even gives some rules he wishes women would abide by. Remember, these rules are derived from his interpretation of the Bible, so this means that these rules were given to Proch by God on Mount Sinai:

Here’s the bottom line for Proch; women need to get right with God. According to him, immodest dress is a sign of a heart problem:

I Corinthians 6:20 tells us to “…glorify God in your body.” The next time you go to put on those shorts with the 2 inch inseam, or the shirt that reveals cleavage, ask yourself, “Is this really glorifying to God? Will it direct people’s thoughts towards God, or will it lead them somewhere else with their thoughts (and eyes)?” Remember your ultimate end is to honor God with every single thing you do.

I know, nothing new here. Just another screed by an Evangelical man who blames women for the moral (using the word moral as Evangelicals do) failing of weak, pathetic, sex-crazed, visually stimulated Evangelical men. Out here in the evil world of unwashed, uncircumcised Philistines, men are generally required to own their sexuality. It is up to me to choose how I sexually respond to others. I am a married man in a committed, monogamous relationship. This fact determines the parameters of my sexuality. That said, my wife doesn’t scold or chide me when I enjoy female beauty or comment on the female shape. She gives me a boys will be boys look and is quite glad I still look at her the same way.  Beecher Proch needs to grow up and spend some time in a world that is not dominated by Christian fundamentalism. Perhaps then he can learn to not blame women for the sexual ills of males. His post is little more than another example of the slut shaming that is all too common in Evangelicalism. (please see my recent post Dear Kristen Welch, How to Make Sure Your Teen Age Son Can’t Handle His Sexuality and Rebecca Davis Worried About Her Lustful Four Year Old Ogling A Woman Wearing a Bikini and other post on human sexuality)