A Devil Worshiper Might Live Near You or Sit Next to You at Work, warns Jennifer LeClaire

Jennifer LeClaire, senior editor for CHARISMA Magazine, is a Charismatic Christian version of Joseph McCarthy — the noted Communist hunter of the 1950s. Everywhere LeClaire looks, she sees Satan and his demon worker bees. In a March 18, 2016 article published on Charisma’s “news” site, demonphobic LeClaire warns that Satanism is on the rise. LeClaire writes:

Satanism is rising—and rising rapidly. Beyond shows like Lucifer that paint the devil as simply misunderstood and the distribution of Satanic Temple materials in some schools and the Satanic black mass at an Oklahoma City civic center and the monument to Baphomet in Detroit—these are just a few recent examples—there are the senseless deaths of young men like Edwin Juarez Palma.

Police in Mexico arrested a trio of Satanists who allegedly killed a friend in the process of trying to morph him into a vampire. Palma, the victim, was reportedly strangled, beaten and slashed in the neck before he died. The Satanists wrapped his body in a plastic bag and ditched him.

“Police say Edwin, known as Piwa, was killed after being fooled into taking part in an initiation ceremony to become part of a satanic cult called the Sons of Baphomet 1,” the Daily Mail reports. “Instead, he was tortured after having his hands tied behind his back after one of the alleged killers persuaded the others their victim should be sacrificed so he could return to life as a vampire.”

Clearly, these kids are deceived at best and deluded at worst. Two of the suspected killers are 18 and the other one is 25. According to Encyclopedia Satanica, the average age of a Satanist is 25 and most are single male Caucasians. Satanists are politically diverse, work a range of occupations and come from Jewish, Catholic, Protestant or agnostic backgrounds. Most were involved in other religions before they converted to the literal dark side.

Who knows? A devil worshipper might live near you or sit next to you at work.

By the best statistics I can find, there were 50,000 Satanists in the world in 1990, according to the Ontario Consultants of Religious Tolerance, and that number rose to as many as 100,000 in 2006. Of course, that was a decade ago—and a lot has changed in a decade. More recently, the Catholic Church warned of the rise of Satanism and the occult. And God’s Ghostbusters reports there are more than 200,000 registered witches and up to 8 million who have not officially unveiled themselves.

Dark forces are also invading Christianity. Three out of every 10 teenagers have played the Ouija board, had their palms read, and eight out of 10 have read horoscopes, according to a Barna Study called “Teens and the Supernatural.” The survey reports 29 percent of Christian teens did not see anything wrong with it. Eighteen percent said they read horoscopes, but do not think it really predicts the future. And another 8 percent said they read it, but feel guilty about it.

Clearly, the prince of the power of the air is working overtime and seeing the fruits of his labors. Books and movies about boy wizards captured the attention of a generation and a fascination with vampires is ultimately what some believe led to Edwin Juarez Palma’s demise. (Palma had interest in vampires as a hobby, according to news reports, allowing an open door for the Satanists to deceive him.) We know that Satan disguises himself as an angel of light (2 Cor. 11:14), but he’s really the father of lies (John 8:44) and he wants to take a [sic] many people to hell with him as he can. Palma was a victim of the devil’s empty words.

LeClaire warns readers that many Christian teenagers have “played the Ouija board, had their palms read” and have “read horoscopes.” Sadly, where most thinking people see entertainment, LeClaire sees dark forces out to steal the souls of unwitting people. Many readers of this blog can remember when they too thought that inanimate objects were demon-possessed and had the power to lead people into darkness. Who can forget the 1980s and all the hysteria over certain toys. Here is a video of Phil Phillips, author of Turmoil in the Toy Box, warning Christians about the demonic forces that lurk in toy boxes:

The 1970s gave Evangelicalism the dangers of Satan-inspired rock music and backmasking. The 1980s and 1990s found Christians all worked up over the occult, Satanic human sacrifices, and ritual child abuse. Sadly, Evangelicals have a propensity for believing any explanation that helps them to understand what they perceive as the collapse of Christian America. Who and what gets the blame changes with time, but the perceived power behind it — Satan and his demons — remains the same. It is hard to believe — in the twenty-first century — that there are still people who think that the Devil and his minions lurk in the shadows, working to overthrow the Christian God. 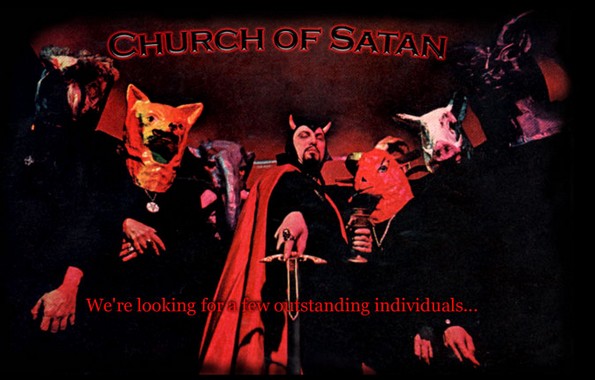 LeClaire thinks the increase of news stories about the Satanic Church is proof that Satanism is increasing. LeClaire seems ignorant of the fact that members of the Church of Satan do NOT worship Beelzebub. I wonder if demon hunter LeClaire has ever bothered to read the FAQ on the Church of Satan’s website? I doubt it. Had LeClaire read it, she would have found out:

Why do Satanists worship The Devil?

We don’t. Satanists are atheists. We see the universe as being indifferent to us, and so all morals and values are subjective human constructions.

Our position is to be self-centered, with ourselves being the most important person (the “God”) of our subjective universe, so we are sometimes said to worship ourselves. Our current High Priest Gilmore calls this the step moving from being an atheist to being an “I-Theist.”

Satan to us is a symbol of pride, liberty and individualism, and it serves as an external metaphorical projection of our highest personal potential. We do not believe in Satan as a being or person.

Where would Christianity be without Satan? Created by God, Satan is Jehovah’s protagonist. Without Satan, how would Christians explain the existence of evil? Without the prince and power of the air, sin would lose much of its power. Without Lucifer, Evangelicals would lose the greatest excuse ever cooked up by religious fanatics — the devil made me do it!

LeClaire thinks that much of the evil in the world can be attributed to Satan, demons, and their influence over people. As Joseph McCarthy did sixty years ago rooting out people he thought were Communists, LeClaire warns that Evangelicals could have neighbors or fellow employees who are devil worshipers. How will Christians know if Morningstar’s followers are nearby? LeClaire doesn’t say. Perhaps enlightened Evangelicals have some sort of spidey-like tingling that comes over them when Satanists are nearby. Or maybe the Holy Spirit warns Christians with some sort of radar-like beep that demons are near. I wish LeClaire would be clear. How can Christians KNOW when Satan and the Demonettes are playing nearby? From everything that I have read — reports of religious leaders committing horrible crimes — people have much more to fear if pastors, priests, and church leaders live nearby. Of course, LeClaire would respond by saying that predator preachers are under the influence of Satan and are being used by him to give Christianity a bad name. Funny how Le Claire and her fellow Evangelicals never become aware of Satan’s influence until AFTER a crime has been committed. I would think God would have some sort of advance warning signal set to alert Christians that certain pastors are under the influence of the Evil One. Surely God doesn’t want Christian children and teenagers raped, molested, or abused, right?

People need not fear Satan or God. Both are fictions of the human imagination. It is when we allow God, Satan, and their imaginary powers stand in for goodness and evil that we become deceived. As a humanist, I believe that the power to do good and evil rests solely with people. God and Satan become middlemen who rob humans of rewards for doing good and responsibility for doing bad. Once people break free of the Christian God and his sidekick Satan, they are then free to see and experience life as it is. Ouija boards? Horoscopes? Palm readings? Harry Potter? Wizards? Witches? Occult-themed movies? Harmless fun. I have yet to meet or know of person who was led over to the mythical dark side by Potter and his Hogwarts friends. To LeClaire and her fearful compatriots I say, SATAN IS NOT REAL! Repeat after me, SATAN IS NOT REAL! Yes, Satan has his own program on FOX, but the star of the show — Lucifer Morningstar — is actor Tom Ellis, not the mythical Bible character with the same name.

Of course, Fundamentalists such LeClaire will view this post as PROOF that Satan is real. Here’s Bruce Gerencser — once an Evangelical pastor — now saying that God and Satan are a myth. There is nothing I can do about such accusations. People prone to think inanimate objects have power and evil hides under every rock have lost the ability to think and reason. They will remain this way until they come to the place where they realize that they have built their entire lives on what Jon Stewart affectionately called: Bullshit Mountain.