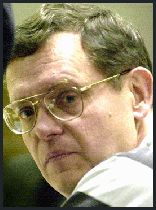 In March 2000, Joe Combs and his wife Evangeline were tried and convicted on numerous criminals charged related to their ritual abuse and rape of their adopted daughter. Joe Combs was the pastor of Emmanuel Baptist Church in Bristol, Tennessee. He previously had been a trusted member of First Baptist Church in Hammond, Indiana and a teacher at Hyles-Anderson College.

Dalena Mathews and Robert Sorrell, reporters for the Bristol Herald Courier had this to say:

Sullivan County District Attorney General Barry Staubus said news of the Turpin case brought back memories of a case he prosecuted in 2000.
“I immediately remembered the Combs trial and started comparing it to what’s happening in [the Turpin] case,” Staubus said in a recent interview with the Bristol Herald Courier.

“The difference is that in the Combs case, it centered on the sadistic, brutal treatment of Esther Combs.”

In November 1998, Bristol Tennessee Police arrested Joseph D. Combs, pastor of the now-defunct Emmanuel Baptist Church on Weaver Pike, and his wife, Evangeline Combs, on charges that they brutalized, Esther, a girl they were raising as their daughter.

The couple and their children were living in the church parsonage at the time the abuse took place.

Grand jury indictments against the couple were the culmination of a multi-jurisdictional investigation that began in February 1997, according to Blaine Wade, who now serves as Bristol Tennessee’s police chief.

Police began investigating when Esther, then 19, was taken to Bristol Regional Medical Center for treatment after she attempted to commit suicide.
Hospital staff discovered that her body was covered in layers of scar tissue. It was revealed during the trial that she had more than 400 scars.
The case went to trial more than a year later in March 2000. Lawyers questioned 121 jurors over six days before agreeing on the 12-member jury. The 12 jurors selected for the case included five retirees, a nurse, a press room manager, a bread salesman, a fast food restaurant manager and several Eastman employees. The group also included two church deacons and a Sunday school teacher.

Subpoenaed witnesses for the defense included two Michigan lawyers who represented Esther in a civil action against the Combses and against the Indiana adoption agency that placed her with the family.

Esther led a tortured life behind the locked doors of a Bristol church, enduring rapes, beatings and burnings at the hands of the people who should have protected her, Staubus said in his opening statement.

“Inside this locked, closed fellowship hall, there were sinister things going on,” Staubus said.

The couple systematically beat and abused the girl with baseball bats, wood burners, pliers, pieces of tin and metal whips, the prosecutor said.
“Mrs. Combs found out about [the abuse], and she blamed Esther and she viciously abused her,” Staubus told the jury.

Along with physical abuse and rape came other forms of cruelty, Staubus said. Esther was starved, denied an education and medical treatment and was “separated out to be the family servant,” the prosecutor said. “You will hear and see evidence of lies, betrayed trust, assaults, injuries, brutality, molestation and even torture.”

Defense attorneys, Spivey and Joe Harrison, said Esther had an ulterior motive. “She has filed a multimillion-dollar lawsuit, and has received compensation for stories she has told to news agencies and newspaper people,” Spivey said.

Spivey said the most important evidence would come from the girl’s five brothers and sisters, who would testify she was a “disturbed young woman who inflicted injuries on herself.”

The jury was shown 58 photographs, which were taken by Richmond on the day the young woman was admitted to the hospital. The photographs showed red, whip-like marks covering the young woman’s back, raised scars on her buttocks and near her genitals, and other scars on her forehead, chin, neck, wrists, arms, breasts and legs.

When the detective tried to uncover the cause of the disfiguring marks on the young woman’s body, she was met by silence, Richmond said.

“Joe Combs told me he did not know she had scars and that he had never seen the scars before,” Richmond said. “He said she was very clumsy and she fell down a lot on the pavement.”

Esther took the stand on the 12th day of the trial, where a standing-room only crowd filled the courtroom. Joseph and Evangeline Combs showed little reaction to the testimony and rarely looked at Esther Combs while she was speaking.

“My earliest memory is of being tied to the high chair and thrown down the stairs by Mrs. Combs,” Esther testified, drawing gasps from the crowd of courtroom spectators.

She testified that the abuse continued for the next two decades as she detailed numerous incidents of abuse by Joseph and Evangeline Combs.

So many people wanted to observe the trial, Judge Beck set up a lottery system to determine which members of the public would get seats for the court session. He said he would not let spectators stand in the courtroom, but on certain days, some were allowed to do so.

A number of witnesses testified on behalf of the defense that the Combs children were “normal, happy children.”

The couple’s other children denied the allegations against their parents.

The former pastor adamantly denied allegations that he raped, tortured or enslaved Esther.

“I love her. I thought she loved me,” Joseph Combs said. “I’m bewildered by all of this. I can’t get my mind around it. It doesn’t make sense.”
Combs took the stand, but his wife did not.

On April 26, 2000, Joseph Combs was sentenced to 114 years behind bars. He later died in prison. Evangeline Combs received a 65-year sentence.

What follows is a video from the trial. Warning! This video is graphic:

The fundamentalist Baptist minister charged with kidnapping, raping and torturing a girl he took from a Porter County children’s home was once a respected Bible teacher at Hyles Anderson College in St. John Township.

When the Rev. Joseph and Evangeline Combs allegedly illegally adopted a 4-month old girl from the Baptist Children’s Home and Family Ministries in Kouts, he was “probably the foremost Bible instructor at Hyles Anderson,” said Jerry Kaifetz, a former student at the school and now an ordained minister. The family settled in a comfortable ranch home along a cul du sac in northwest Merrillville, where neighbors say the children were polite, well behaved and said they were not allowed to talk to adults unless their parents were present.

Joyce McGowan, a neighbor of the Combs family when they lived in Merrillville, said the Combses often tried to talk McGowan and her husband into accompanying them to Sunday services at First Baptist Church in Hammond. The Combs children were not allowed to exchange even small talk with McGowan, she said. McGowan also said she recalled the Combses often commenting how often their adoptive daughter seemed to be ill. “She was the one we didn’t see too often,” McGowan said. “She was small at that time, I think she couldn’t have been but 9 or 10 when they moved away. When we did see her, she had the saddest little face you ever saw.”

Prosecutors in Tennessee said the girl lived a hellish existence with her adoptive parents, being tortured and sexually abused as she was brainwashed into believing she was being raised to be the family’s slave because it was “God’s will.” The alleged abuse was discovered when the woman, who turns 21 on Monday, was hospitalized after a suicide attempt last year. Federal court records show the Combses were given the little girl in March 1978 by the operators of the Baptist Children’s Home. The adoption process was never completed. In a lawsuit filed Friday in federal court in Hammond, lawyers for the woman said their client was systematically tortured by the Combses, never allowed to attend school and not told she was adopted or that a judge never awarded custody of her to the Combses. The lawyers are suing the Combses for their alleged abuse and the Baptist Children’s Home for negligence. The lawsuit does not specify the damages being sought.

Kaifetz said Combs left the area, probably in 1985, during a controversy over his sale of Bible study books at the college. He has had no contact with Combs since then, but did see an advertisement for his ministry several years ago in a religious publication.

The Rev. Jack Hyles, the pastor of the First Baptist Church and chancellor of Hyles Anderson College, could not be reached for comment Saturday. Beverly Hyles, his wife, said neither one of them has had any contact with the Combses since they left the area, taking 40 or so Hyles Anderson students with them to start their Tennessee church. “He has called us several times,” Hyles said. “We have not returned any of his calls.”

The woman’s lawsuit says she faces huge medical bills as the result of her alleged mistreatment. Among the injuries the Combses are alleged to have inflicted upon the woman were broken bones, dislocated joints, severe and repeated lacerations and trauma and damage to the nervous system and vascular systems. She is being cared for in Michigan by a foster family and has met both of her birth parents since her suicide attempt, said Gregg Herman, one of her lawyers.

Jennifer Talirico, another former neighbor of the Combses, said she was horrified to learn of the charges pending against the Combses. “They kept to themselves, they certainly weren’t the type to have neighbors over or anything like that,” Talirico said. “But God, I wish I knew what was going on in that house.”