The Jonathan Nichols Story: Growing Up Gay in the IFB Church 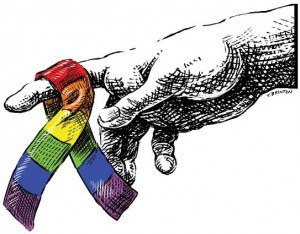 What follows is a brief excerpt of a story about Jonathan Nichols. Jonathan grew up in the Newark Baptist Temple,  the Independent Fundamentalist Baptist church (IFB) pastored, until recently, by my wife’s uncle, James Dennis.  The Pastor (Jamie) Overton in this story is married to my wife’s cousin. He and his family are now missionaries.  Polly’s parents have attended this church since the late 1970s. The Christian school in this story is the Licking County Christian Academy in Heath, Ohio. It is owned and operated by the Newark Baptist Temple.

The following story is excerpted from Part One and Part Two of Jonathan’s story:

My story is going to be slightly different than the others featured on this blog because I actually never attended Bob Jones University. However, before you stop reading, you should know that I would be finishing up my freshman year at BJU had I not been outed in high school, expelled, and ultimately forced to leave home. My parents are both BJU alumni, and the principal of my Christian school in Ohio was a BJU-pusher. In fact, while I was growing up, BJU was presented as the only viable choice of college by my family and a few teachers. Because of that, my story isn’t too different from the others here, I just went through the same things earlier, before I actually went to college.

I grew up in Newark, Ohio and attended an independent fundamental Baptist church since I was born. That church was more conservative than Bob Jones, and my parents were more conservative than the church. My mom, the church pianist and school music teacher, was forever busy taking the “sensual” triplets out of songs like “Some Trust in Chariots” and campaigning against songs like “As The Deer” and “Bow the Knee.” As you can probably deduce from that, practically no modern music was allowed in our household either. I grew up on classical music and only classical music and quickly learned that there was no such thing as likes and dislikes when it came to music. There was just good and bad. You are to listen to good music and not to listen to bad music. What music you “like” has nothing to do with anything.

That mentality was carried into every area of life.

I suppose being the music teacher’s son allowed me to be a little gay boy without thinking anything of it or being called out about it. I was totally into music and art and pretty things, and nothing was weird. I would play with scarves without feeling odd. Well, without feeling too odd. I knew that none of the other guys my age were playing with scarves. Fortunately, I didn’t think about it too much.

Ok, so I can’t really credit my discretion for keeping me in the closet for eighteen years… Like I said, I played with scarves and wasn’t careful about making it known that I was a musician and not like those “other” guys. The atmosphere was so anti-gay that no one even bothered to think that there could be a gay kid growing up there, regardless of how obvious I made it. Besides, I was still a kid. I didn’t even know what it meant to be gay. Heck, I didn’t even know that it meant anything besides “happy.” So in the minds of the church and my parents, there was no way I could have chosen to be gay yet. And since being gay is a choice, that meant that I was a good, straight little boy. Just like God intended. Right? Totally….

….wanted so much to be able to be honest with someone that I was actually in contact with. I hinted to my closest friend that my friendship with Ryan wasn’t just a friendship. She was, naturally for someone in our atmosphere, worried for me. So, despite her promises that she would trust me to do what I felt was right, she went to my youth pastor for help. He promptly told the senior pastor, who is superintendent of the school. The next day, I was called into Pastor Dennis’s office for questioning. Pastor Overton was also in the room, sitting to my left with a legal pad and a pen, taking notes. Dennis tried to start off nice enough, but it was obvious that they found out. I decided that a clean breast of the issue would be best, and went into my research on the matter, hoping at least to get an opposing rebuttal and at best to convince them. How naive I was. . . I don’t remember much of that conversation, but one thing rings vividly in my mind. I mentioned that the Greek word malakoi in I Cor. 6:9 was never elsewhere, in the whole of Greek literary writings, translated “effeminate.” It carried a whole different connotation. His response? He turned around, pulled his Strong’s Exhaustive Concordance off the shelf, looked up the word, and pointed to the definition. He never for one second imagined that Dr. James Strong was not infallible and that his concordance was not holy writ. In those several hours, my pastor beat me down. Hard. I was totally conquered, save in one regard. I would not tell him who I was “dating.” I did not see that it was my place to get someone else, especially someone I loved, in trouble like this. Dennis found out anyways. He had me break up with Ryan. I cried all night…